U.S. & China: Emerging Technologies And The Race To Control The Future 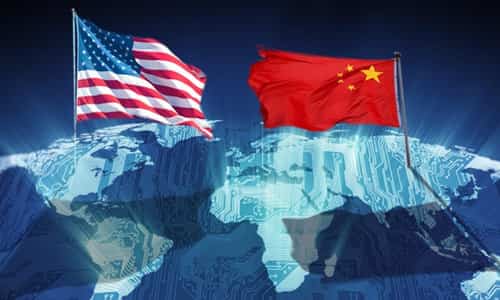 By Lawrence A. Franklin/Gatestone Institute September 30, 2020
Share this article:
The United States is in a "Tech War" with China, the victor will control the global dissemination of information. The winner will also write the world's rules and standards for emerging technologies in the digital economy.
Chinese Communist Party (CCP) Chairman Xi Jinping threw down the gauntlet to the U.S. in a May 2017 speech, where he outlined the plan for establishing a Chinese-supervised "Digital Silk Road." President Xi realizes that the information dimension of modern war is bound up with China's apparent overall objective of unseating the United States as the leader of the existing liberal democratic world order.
Xi seemingly wants to secure a commanding lead in the emerging hi-tech disciplines to create a sense of inevitability about China's rise to world domination. The U.S. still has the time, talent and resources to secure a victory over China in this contest for global leadership, provided that the U.S. has the will, self-discipline and flexibility to institute a total societal mobilization over decades.

China specialists such as Gordon Chang and policy officers in the Trump Administration have sought to educate the American public on how China came to emerge as a potent challenger to U.S. global primacy in hi-tech disciplines.
Many of the methods by which China rose to contender status include stealing intellectual property on a massive scale, with the collusion, sadly, of many Americans; forced transfer of entrepreneurial secrets of U.S. firms as a prerequisite to operating in the Chinese market; meticulous, long-term planning to secure China's national priorities; legal and illegal recruitment of foreign human talent, and lavish state support for Chinese hi-tech firms.
China may have unintentionally alerted the Free World to its present danger by revealing the CCP regime's true face -- not exactly the one presented by "A rising China is a ... positive ­development not only for China, but for America" -- as well as its global ambitions. China has revealed this true face by an abominable human rights record, underscored by its genocidal policy toward China's Uighur minority in Xinjiang Province.
China's aggressive territorial expansion against Hong Kong and several of its Asian neighbors -- not to mention how it deliberately exported the Wuhan virus internationally while closing transportation to limit its spread within China -- has helped strip away its carefully orchestrated image as a responsible major power and has exposed a belligerent state controlled by the CCP.

Now, a Chinese physician and virologist, Dr. Yan Limeng, who fled China and is in hiding in the U.S., has said that China released the virus "intentionally" -- perhaps, one surmises, as a way of torpedoing both President Trump's prospects for re-election and his effort to alter trade deals that have favored China by $600 billion a year. Meanwhile, Twitter thoughtfully deleted Yan's clearly important account.
China's domestic implementation of advances in surveillance technology to control its own population also has contributed to the negative transformation of China's international image. The CCP has employed these advances to create a surveillance state to monitor the actions of Chinese citizens, and many countries have purchased Chinese facial recognition products. These state customers run the gamut of political systems from dictatorships to democracies.
Artificial intelligence (AI) is another emerging technology where China is making inroads on the reported U.S. lead. China has set a goal of overtaking the U.S. in AI by 2030. AI is a scientific discipline that teaches machines to imitate human actions. Such applications have enormous potential to impact the efficiency and accuracy of modern weapon systems such as missiles. AI exercises have produced results as in assisting surgery and where machines have bested world-class Chess Masters and Go enthusiasts.
Five factors contribute to breakthroughs in AI and other emerging technologies: patents, investment, hardware, talented labor and academic research. Both China and the U.S. are improving the ability of AI to capture the nuance of languages.
China has now surpassed the U.S. in the number of published scientific studies, but there is a caveat: U.S. scientific publications remain, on the whole, qualitatively superior. These studies help keep the U.S. a step ahead in basic software such as computer data management, processing and in operating system software.
Another critical discipline where the U.S. maintains a clear advantage over China is semiconductor chip technology, necessary for the manufacture of various electronic devices. The Trump administration's decoupling of China's Huawei Technologies Co., Ltd from the American market has helped slow Beijing's effort to catch up to the United States in semiconductor technology.
The electronic materials, chemical gases, and lithographic technology -- all components necessary for the production of the most advanced semiconductors -- can presently only be produced in Free World states such as the U.S., Japan, and the Netherlands

Perhaps the most spirited and public manifestation of the U.S.-China "Tech War" is in space. This competition may recall the drama of the "space race" between an earlier generation of superpower rivals, the United States and the Soviet Union. Rather than the US-USSR rivalry to reach the moon, the focus in the current US-China contest is in space weaponry -- and reaching Mars.
China is making impressive strides in space operations by recently deploying the BeiDou constellation of 30 satellites, its rival to the U.S. Global Positioning System (GPS). China also has plans to launch its own space station as an alternative to the International Space Station that highlights global cooperation, especially between the U.S. and Russia. Ominously, China appears to be doubling down on its effort to checkmate the West's capability to use space-based systems during conflict.
If China can successfully blind U.S. systems by offensive cyber operations or outright destruction of U.S. systems by anti-satellite attacks, the war-fighting advantage currently possessed by the West can be annihilated. China executed a successful anti-satellite strike as early as 2007; it showed its capability by destroying one of its own aging weather satellites.
Still another new technology with enormous potential for solving complex mathematical and scientific problems more quickly than today's computers can is quantum computing. While the U.S. claims to have created the first quantum computer, China appears to be leading in the military application of this new science.
China has already demonstrated the ability to create unbreakable encrypted messaging, an accomplishment that could keep other countries in the dark about planned secret Chinese military operations, such as, say, an invasion of Taiwan.
The U.S. still leads China in Research and Development (R&D) spending, but Beijing has made great strides in this area as well. In order to keep pace with China's all-out effort to dominate emerging technologies, a well-disciplined, coordinated approach by the U.S. government, sort of a "Manhattan Project" in all of the key hi-tech areas, might help. The costs to the US of falling behind could well prove catastrophic.
Originally published at Gatestone Institute - reposted with permision.