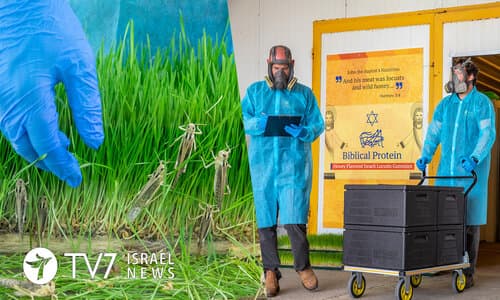 By Adam Eliyahu Berkowitz/Breaking Israel News October 02, 2020
Share this article:
Though normally eating bugs is an unappetizing and distinctly anti-kosher topic, an Israeli startup is challenging that notion with "Biblical protein." And they're doing it in a manner that may solve world hunger to the delight of both environmentalists and Biblical scholars alike.
Six years ago, Dror Tamir, a serial entrepreneur for food and nutrition for over 15 years, decided to create a food source that would help with the looming threat of world hunger. For inspiration, he turned to the stories his grandparents told him of life on a kibbutz in the early days of Israel.
Food was scarce and swarming locusts represented a life-threatening catastrophe. The kibbutzniks would go into the fields, trying to scare the swarms away with pots and pans. But some people would come with sacks to collect  and eat them. The consumption of these locusts was mostly done Yemenite, Moroccan, and Tunisian Jews who recently arrived in Israel.

A solution to protein deficiency
As an adult, Tamir understood that the protein industry is set to double by 2050. And with existing protein sources reaching their limitations, he established his Hargol company to find the solution.
Many international initiatives have advocated using insects as an element in food production. The United Nations' Food and Agriculture Organization (FAO) has been a longstanding supporter of cultivating insects as an alternative source of protein. Meanwhile, the European Union recently presented its Farm-to-Fork Biodiversity Strategy which included insects.
For the most part, these initiatives focus on raising insects to be used to feed animals destined for human consumption, i.e. cows (dairy and meat), poultry, or fish. This is partly due to heavy regulation for new forms of food destined for human consumption and partly due to the built-in reluctance in most cultures against eating bugs.
But is it Kosher?
In Judaism, this reluctance is a part of the laws of Kashrut (Kosher) which strongly prohibit the consumption of insects. Except for one.
Of these you may eat the following: locusts of every variety; all varieties of bald locust; crickets of every variety; and all varieties of grasshopper. But all other winged swarming things that have four legs shall be an abomination for you. Leviticus 11:22-23

In a rare case of rabbinic consensus, Tamir is expecting the Chief Rabbinate to issue a certificate of Kashrut within the next few weeks permitting the locusts to be eaten by all Jews.
"The Ashkenazi rabbis were able to rely on the clear tradition of the Morrocan, Yemenite, Tunisian, and Algerian Jews that this species of the grasshopper is the one specified in the Torah as kosher," Tamir said. "They have been eating our product since Mount Sinai."
Where Bible Meets Innovation
The strength of Tamir's startup lies not in the concept, which has been around since Biblical times, but in his hard work developing innovative methods for commercially raising the grasshoppers. They reduced the incubation period of the eggs from 40 weeks to two weeks. Using the techniques he and his team have developed, the grasshoppers are fully grown in 30 days and they are working on reducing even that low number through selective breeding.
"Many other companies around the world have invested huge amounts of money, time, and energy into trying to do what we have done here," Tamir told Breaking Israel News. "We started out in my garage and not only did we succeed but we also were successful in scaling up."
People already eat them
Grasshoppers are already the most popular insect eaten by humans with 2.5 billion in Asia, Africa, and Central America. In some countries, grasshoppers are considered a delicacy and sold for exorbitant prices. But that is due to short seasons during which the insect can be harvested in the wild. Hargol is the first that has succeeded in raising the insect.
"At this point, grasshopper protein is a bit more expensive than plant-based or animal-based," Tamir said. "But we are just getting started and this will improve very quickly. Also, grasshoppers are a much better source of protein."
It's healthy
Health-conscious consumers will love Biblical protein. It has superior nutrient content with up to 70% protein, all essential amino acids, omega-3, omega-6, iron, zinc, folic acid, chitin. Compared to animal-based protein, it has much lower levels of saturated fat and cholesterol, as well as having a greater density of amino acids.
Zero waste
Tamir also noted that only about 20% of an animal can be eaten.
"Unlike animals or fish which must be butchered and processed, locusts present zero waste," Tamir said. "The grasshopper is entirely edible and all materials are converted into product."
Tamir emphasized that success does not come from technology or capital investment.
"It is all about the people you surround yourself with," Tamir said. "And that isn't measured in academic degrees. Each person represents success at overcoming an obstacle that stands in the way of success. We are all very motivated and believe in what we are doing."

Overcoming legal hurdles
In addition to the technical difficulties and religious certification, Tamir had to cope with laws restricting the industry. An outbreak could lead to a man-made plague. Tamir cooperated with the government agencies, helping to write the laws for what he hopes will be a burgeoning industry.
From his one facility in Kidmat Tzvi in the Golan, formerly used to raise chickens, his group can raise a quarter-million grasshoppers at a time, enough for a quarter ton of food product, enough for 150,000 protein bars. The wheatgrass is grown at another facility and yet another facility in Nazareth is for making the final product.
Another facility is active in research and development. His entire project is about to be scaled up again as the demand already exceeds its production capacity. And they have only been actively marketing in the US for three weeks.
Grasshopper protein bars?
They currently have three products for sale: whole grasshoppers freeze-dried, protein powder, and protein bars. But the possibilities are as endless as the human appetite. They are developing an assortment of locust-based products including protein powder, protein-enriched meats, nectars, chocolate, energy bars and so much more. Their lines of gummy bears and hot dogs were sold out.
The ethical dilemma
Though locusts are not plants, eating them presents fewer ethical obstacles for vegetarians as the insects do not experience pain. The grasshoppers that are ready to be harvested are placed in a refrigerated room and simply go to sleep as the temperature is lowered. While asleep, they are placed in a freezer, where they painlessly pass away. Locusts also require far less processing and additives than most vegetarian proteins.
For religious Jews, grasshoppers are classified as pareve, neither meat nor dairy. As such, they can be eaten with either dairy or meat.
The New Testament Reference
Christians have already shown great enthusiasm for the product, perhaps due to the New Testament account that John the Baptist,  an itinerant preacher in the early First Century CE who figured prominently in early Christianity, ate locusts dipped in honey.
The industry offers year-round production (as opposed to limited seasons in the open) which results in a continuous supply to meet the growing demand while making it a secure and reliable food source. The locusts emit significantly lower greenhouse gases, utilize less water, and take up fewer land resources. Of course, no insecticides are used. Even the food the grasshoppers eat is grown in greenhouses so no pesticides are used.
Hargol FoodTech has won (so far) ten international food and nutrition competitions: Whole locusts and a variety of flavored Biblical protein bars can be ordered on their website by clicking here.