Amazon Promotes New Pay By Palm - Another Precursor To The Mark Of The Beast? 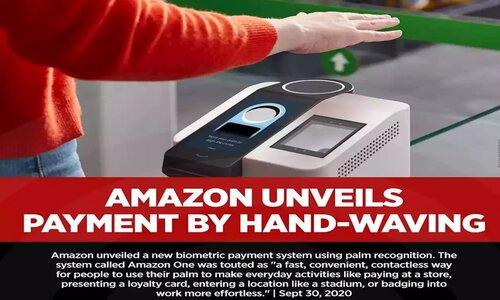 By Aaron Kesel/Activist Post October 02, 2020
Share this article:
Amazon has announced a new product for its Ring subsidiary company, a mail surveillance system. They also went a step beyond and released a new palm scanner point-of-sale system.
Amazon announced its rollout of Amazon One devices that use a customer's palm prints for identification and payment at physical retail stores. The devices are presently available for use in Seattle locations for Amazon Go stores, and the company wants to expand it to any retailer willing to partner with the mega-giant.
According to an announcement by Dilip Kumar, the vice president of Amazon's physical retail business, the Amazon One device creates even less payment friction in the company's cashier-less retail stores.
Instead of being identified by an account on their mobile phones, customers can simply walk into the store, scan their palm, shop for products, and the purchases will be automatically charged to a credit card.

A spokesperson for Amazon told Recode it has "no plans to use transaction information from third party locations for Amazon advertising or other purposes."
However, Amazon says it wants to use the tech to spread to third-party partners, and payments aren't the only function it has in mind for the system. Other use-cases discussed include a customer entering a location like a stadium, badging into work, and loyalty cards. It brings to mind a dystopian view of society.
If the Amazon One hand scanner wasn't enough, Amazon Ring just announced that it will be releasing a new in-home drone and mail monitoring system using a sensor. Activist Post reported last week on the in-home drone, noting how the autonomous drone "Always Home Cam" zooms around inside your home to give you a perspective of any room you want when you're not home.
The drone can also be commanded to fly on-demand or programmed to fly when a disturbance is detected by its linked Ring Alarm system. Once it's done flying, the Always Home Cam returns to its dock to charge its battery like a good robot.

The latter mail system is equally as privacy-invasive as a camera that flies around your home. The $30 Mailbox Sensor is similar to the Ring Motion Sensor accessory for Ring lighting products. The new Mailbox Sensor is a little sensor that relies on Amazon's Sidewalk technology to extend the range of your Wi-Fi network, reports CNET.
The Ring Mailbox Sensor is designed to send an alert to your phone when the door is opened; and it's supposed to work with other Ring products, such as using Ring doorbells and outdoor cameras to record footage when the mailbox is opened. This means that the cameras will trigger to record the mailbox when the sensor is tripped.
Ring is really fulfilling its goal of becoming a blanket surveillance system.
If Amazon's use of palm prints for identification and payment systems sounds like something you have read in the Book of Revelation you are correct.
The Book of Revelation warns that during the Tribulation every person will be required to accept a mark in their right hand which will be necessary for commerce.
"And the second beast required all people small and great, rich and poor, free and slave, to receive a mark on their right hand or on their forehead, so that no one could buy or sell unless he had the mark -- the name of the beast or the number of its name. Here is a call for wisdom: Let the one who has insight calculate the number of the beast, for it is the number of a man, and that number is six hundred sixty-six". Revelation 13:16-18

Many Christians are concerned that acceptance of such technology is conditioning people for when the actual 'mark of the beast" is implemented.
What often starts off as voluntary can just as easily become mandatory and whereas tech itself may be neutral, in the hands of the wrong person it could be extremely dangerous.  Imagine the technology of today in the hands of Hitler.
Christians have long debated the meaning of the "mark of the beast".  It still remains to be seen if the mark will be digital tattoos, microchips under the skin or some other form of biometric payment using the hand such as Amazon Pay, but there is no denying it, our generation appears to be the first in history to have the technology to fulfill this prophecy.
Originally published at Activist Post - reposted with permission.