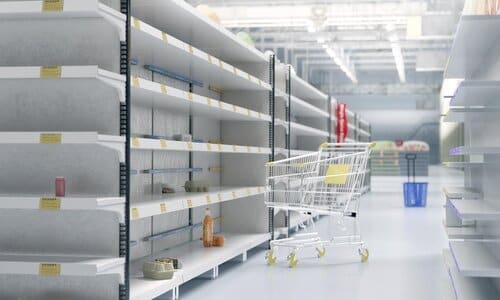 By Michael Snyder/End of the American Dream October 02, 2020
Share this article:
The head of the UN World Food Program has repeatedly warned us that we would soon be facing "famines of biblical proportions", and his predictions are now starting to become a reality.
We have already seen food riots in some parts of Africa, and it isn't too much of a surprise that certain portions of Asia are really hurting right now.
But I have to admit that I was kind of shocked when I came across an article about the "hunger crisis" that has erupted in Latin America.
According to Bloomberg, "a resurgence of poverty is bringing a vicious wave of hunger in a region that was supposed to have mostly eradicated that kind of malnutrition decades ago".
We are being told that food shortages are becoming acute from Mexico City all the way down to the southern tip of South America, and those that are the poorest are being hit the hardest.

Let me ask you a question.
What would you do if you didn't have any food to feed your family?
Fortunately, for the vast majority of my readers that is just a hypothetical question.  But for many families in Latin America, the unthinkable is now actually happening...
He couldn't feed his family. Matilde Alonso knew it was true but couldn't believe it. The pandemic had just hit Guatemala in full force and Alonso, a 34-year-old construction worker, was suddenly jobless.
He sat up all alone till late that night, his mind racing, and fought back tears. He had six mouths to feed, no income and no hope of receiving anything beyond the most meager of crisis-support checks -- some $130 -- from the cash-strapped government.
I once had a friend that is a hardcore prepper tell me that his worst nightmare would be for his daughter to tell him that she was hungry and he didn't have anything to give her.
Many of us can't even imagine being in Matilde Alonso's shoes.  Sadly, this is going to be happening to even more families soon, because the UN World Food Program is projecting that the number of people facing "severe food insecurity" in Latin American and Caribbean nations will rise by a whopping 270 percent in the months ahead.
Thankfully, for the moment the United States is in far better shape.  But there have been serious shortages of certain items throughout this pandemic, and many grocery stores have had a very difficult time trying to keep their shelves full.
For example, during my most recent trip to my local grocery store I noticed more empty shelves than I had ever seen before, and that greatly alarmed me.
And now we are being told that grocery stores all over the country are attempting to stockpile goods in an attempt "to avoid shortages during a second wave of coronavirus"...

Grocery stores across the United States are stocking up on products to avoid shortages during a second wave of coronavirus.
Household products -- including paper towels and Clorox wipes -- have been difficult to find at times during the pandemic, and if grocery stores aren't stocked up and prepared for second wave this winter, runs on products and shortages could happen again.
When even CNN starts admitting that more shortages are coming, that is a sign that it is very late in the game.
And the Wall Street Journal is reporting that some chains are actually putting together "pandemic pallets" in anticipation of more shortages...
According to the Wall Street Journal, Associated Food Stores has recently started building "pandemic pallets" to ensure cleaning and sanitizing products are readily available in its warehouses to prepare for high demand through the end of the year.
"We will never again operate our business as unprepared for something like this," Darin Peirce, vice president of retail operations for the cooperative of more than 400 stores told the outlet. If grocery stores sense something is coming and are preparing for another "wave" of this pandemic, it may be something worth taking note of.
Most of these grocery chains believe that another wave of COVID-19 is the worst case scenario that they could possibly be facing.  Sadly, that isn't even close to the truth.
We have entered a time when global food supplies are going to become increasingly stressed, and it is going to be absolutely critical to keep U.S. food production at the highest levels possible.
Unfortunately, U.S. farmers have been going bankrupt in staggering numbers during this downturn, and the federal assistance that was supposed to help them survive has mostly gone to "large, industrialized farms"...
Five months into the pandemic, farmers say the federal payments have done little to keep them afloat, as these favor large, industrialized farms over smaller family farms. In fact, initial payments under the Coronavirus Food Assistance Program - which provided $16 billion in direct support and $3 billion in purchases - revealed an uneven distribution of financial aid.

An NBC News analysis of the first 700,000 payments showed how corporate farms and foreign-owned operations received over $1.2 billion in coronavirus relief - or over 20 percent of the money - with average payments of almost $95,000. Smaller farms, meanwhile, had average payments of around $300. The figures did not take into account other struggling farmers who are ineligible for assistance.
Reading those numbers greatly frustrated me, because family farms have always been so critical to our success as a nation.
U.S. farm bankruptcies hit an eight-year high last year, and they are on pace to go even higher this year.
This should deeply alarm all of us, because we are going to need as much food production as possible during the years to come.
In 2020, we have just seen one major disaster after another all over the world, and many of these disasters have directly affected global food production.  For example, in my previous articles I haven't even mentioned the historic flooding that has been going on in China for months that is wiping out crops on a massive scale...
Experts from the global financial services group Nomura said that although the flooding is among the worst that China has experienced since 1998, it could still get worse in the weeks to come, with the nation poised to lose $1.7 billion in agricultural production.
However, since the start of the monsoon season, the area of flooded croplands have almost doubled. Nomura's estimates also do not include the potential loss of wheat, corn and other major crops. Therefore, China could be facing a far greater economic loss than current projections.
We really are facing a very serious global food crisis, and the number of people without sufficient food is only going to grow as the months roll along.
For now, most Americans still have plenty of food, and we should be very thankful for that.
But everyone should be able to see that global conditions are rapidly changing, and we should all be using this window of opportunity to prepare, because very, very challenging times are ahead of us.
Originally published at End Of The American Dream - reposted with permission.