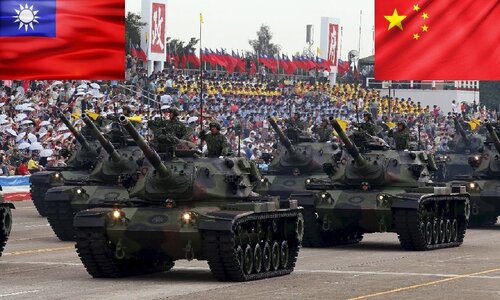 By Gordan Chang/Gatestone Institute October 08, 2020
Share this article:
China, violating previous understandings, has been sending large numbers of fighter aircraft and bombers into Taiwan's airspace this month.
At the same time, China's ruling Communist Party is issuing threats. The flights of military aircraft are not warnings, the Communist Party's Global Times newspaper stated in an editorial on September 18. "They are rehearsals on taking over Taiwan. What is needed is a political reason that can turn them into real battle to smash Taiwan independence forces."
Fortunately, bad weather is coming. The November-through-January period is not conducive to conducting invasions across the Taiwan Strait. Nonetheless, China is clearly gearing itself for war.
Beijing calls the island "sacred" Chinese territory, but Taiwan has never been part of communist China, the "People's Republic." In fact, Taiwan has never been formally recognized as part of any Chinese state. People on the island, in survey after survey, overwhelming consider themselves "Taiwanese," not "Chinese."

Beijing nevertheless insists it has sovereignty over Taiwan, which formally calls itself the Republic of China. The People's Republic has been sending planes near Taiwan's territory to make a point.
Last month, the message was directed at Washington. While U.S. Secretary of Health and Human Services Alex Azar visited Taiwan's capital, Taipei, China ordered aircraft to fly near the island.
This month, China's incursions have been larger. On the September 18, Beijing sent 18 aircraft across the median line, which divides the Taiwan Strait in two. The following day, 19 Chinese aircraft, including nuclear-capable H-6 bombers, flew into Taiwan airspace. The Chinese military in the past has flown H-6s on provocative "island encirclement patrols."
The large incursions on the 18th were especially significant. A Chinese fighter pilot got on the radio to deny that there was a median line, which for years both sides had respected to avoid accidental contact. The pilot, breaking practice, also made a political statement, calling Taiwan a "pawn" of "foreign forces."
Analysts wondered whether the belligerent transmissions were authorized or just the act of a rogue pilot. They did not have to wait long to find out. On September 21, Chinese Foreign Ministry spokesman Wang Wenbin announced "there is no so-called center line in the Taiwan Strait."
Since then, the situation has deteriorated. When U.S. Under Secretary of State for Economic Growth, Energy, and the Environment Keith Krach visited the island to attend the memorial service for former Taiwanese president Lee Teng-hui, known in China as the "godfather of Taiwan secessionism" and everywhere else as "Mr. Democracy," China's planes again flew to Taiwan's side of the median line.

Now, Beijing is sending aircraft near Taiwan "almost every day" and directing them to approach in all four directions.
At the same time, the Chinese are ramping up the rhetoric. "The U.S. and Taiwan must not misjudge the situation, or believe the exercise is a bluff," stated the same Global Times editorial. "Should they continue to make provocations, a war will inevitably break out."
"Deployment of the U.S. army to Taiwan means the start of a cross-Straits war," another editorial from the paper announced.
Ominously, Hu Xijin, the Global Times editor, wrote that China is "morally justified" to wage war on Taiwan.
"Hu Xijin is not just urging China to commence a war to murder millions of Taiwanese, he wants China to be able to kill millions of Americans as well," wrote China military analyst Richard Fisher in the Taipei Times on September 21.
Fisher, a senior fellow of the Virginia-based International Assessment and Strategy Center, told Gatestone on September 26 that Beijing "may not just yet have the overall ability to invade Taiwan," but it is "repeating dangerous military exercises" to "terrorize" Taiwan and "frighten" America.
In short, the Chinese leadership, by sending aircraft close to Taiwan, is risking an incident. In addition, as Beijing increases the chances of an encounter it is, with propaganda releases, justifying taking lives.
Why now?
One explanation is that China's leader needs a victory fast. The People's Liberation Army grabbed Indian territory in early May in Ladakh in the Himalayas while India's troops were unprepared for the surprise attack.
Since late August, India has recovered lost ground and, in the process, humiliated the Chinese, who have proved incapable of counterattacking. The prospect of further advances against fierce Indian troops is not high.
Especially after India, Xi Jinping looks exposed politically. Since becoming the Communist Party's general secretary in late 2012, he has accumulated almost unprecedented power, so he now has complete accountability. There is, inconveniently for him, no one else to blame for debacles. Furthermore, he has changed China's political system by raising the costs of failure.

Xi, therefore, knows that should he fail, he could lose everything -- power, freedom, assets, life.
The legitimacy of the Communist Party once depended on the continual delivery of prosperity. Now, however, Xi knows his economy, facing a wave of defaulting banks and enterprises, is stumbling. His society is also beset by a host of other problems from disease and environmental degradation, and declining demography. China, at the same time, is losing support around the world.
This is the classic case of an aggressive power facing a closing window of opportunity. China's official Xinhua News Agency in January ran a piece titled "Xi Stresses Racing Against Time to Reach Chinese Dream."
In these perilous circumstances for the Communist Party, its only sure basis of legitimacy is nationalism. Nationalism, as a practical matter, means military misadventure abroad.
China's ruler, therefore, needs something to distract restive Chinese people as well as unhappy senior leaders. We may think that Xi Jinping should be cautious, but from where he stands, he now has incentives to start a crisis, especially if he thinks President Trump, seeking re-election, will not respond.
That crisis, at least at this moment, looks as if it is going to be over Taiwan.
Originally published at Gatestone Institute - reposted with permission.

A report by the University of Oxford suggests we will face a robot job apocalypse predicting that 47 percent of U.S. jobs are at risk of b...

October 16, 2020Will The US Go The Way Of Venezuela? Scary Parallels

People want to believe that once 2020 is over, life will return to "normal" and that we're just having a really bad year. When you look a...

October 16, 2020Are You Prepared For The Imminent US Digital Dollar?

Given the fact that the dollar has lost so much of its value, it's not unreasonable to recognize that it's near the end of its run now and...

October 16, 2020One In Five Americans Could Be Out Of Money By Election Day

Consumer finance company Credit Karma has released a new survey showing that nearly one-quarter of U.S. consumers say they have less than ...