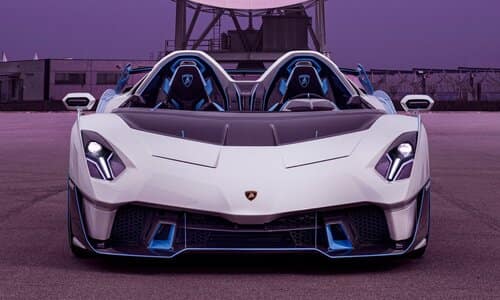 Automobili Lamborghini S.p.A. is an Italian supercar manufacturer headquartered in Sant'Agata Bolognese. It is owned by Audi AG. And although quite recently there was some talk that the German concern is going to get rid of the Italian brand with one of the most recognizable car logos in the world, these rumors are not confirmed yet.

Today Lamborghini is one of the leaders among manufacturers of supercars, which presented to the world impressive cars and innovative concept cars. Cars of the brand cannot be confused with others, they are positioned as aggressive and masculine cars for the chosen ones.

Lamborghini has unveiled the SC20 supercar, and it is not just another special edition of the iconic Aventador that will be produced in limited editions. SC20 was designed and produces in a single copy, by special order of a secret customer.

"The SC20 is a combination of sophisticated engineering, Italian craftsmanship, sportiness, and cutting-edge design. It is also an example of using our V12 engine and carbon fiber in a radical open-top car that unmistakably carries the Lamborghini DNA," says Maurizio Reggiani.

The exclusive car was the continuation of the ideas laid down in the Aventador J and Veneno. And the designers also drew inspiration from the open Diablo VT Roadster from the 90s. Curiously enough, the car's front splitter is styled after the track-ready Huracan GT3 EVO, and the plastic of the sides here is reminiscent of the Essenza SCV12. Additionally, a carbon-fiber antifender with three settings of the angle of the attack appeared on the stern of the car. These components are designed to provide high downforce and optimal aerodynamics.

Even though the SC20 is based on the Aventador, all body panels of the new model are unique. Even the lighting equipment is made specifically for this car.

Technologically, there are not so many differences from the "donor". It uses a proprietary 6.5-liter V12, working without a supercharger in the old way. It develops 770 hp at 8500 rpm and 720 Nm at 6750. Seven-speed "robot" and all-wheel drive are preserved. The interior also shares many similarities with the Aventador, although there are 3D-printed air deflectors and solid aluminum handles.

Lamborghini SC20 has an exclusive white body paint "Bianco Fu" and several components of blue color "Blue Cepheus", which has never been applied to production cars of the Italian brand. This makes the iconic Lamborghini logo shine even brighter than usual. The front and rear of the open-top two-door are 20- and 21-inch forged aluminum wheels with central locking.

The carbon fiber body is designed so that the aerodynamics allows comfortable driving of the roadster without a windshield: only a tiny transparent fairing is provided at the front and sides.

The interior of the speedster is mainly done in black but has eye-catching white and blue accents. Other interior features include unique carbon fiber seats with combined leather and Alcantara trim. The interior of the Lamborghini SC20 also has a decor of carbon fiber, inserts that decorate the doors, the front panel, the steering wheel, and the center console. Interestingly, the ventilation deflectors here are made using 3D-printing technology.