Turkey Is The Next Iran 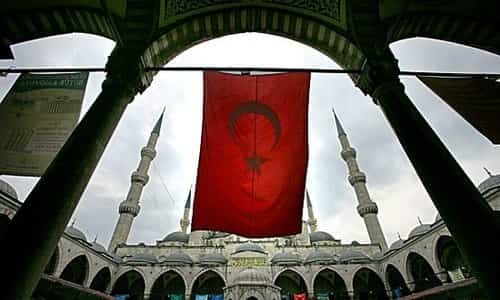 By Dan Schueftan/JNS.org October 14, 2020
Share this article:
Bernard Lewis, the preeminent Middle East researcher of the past few generations, said after Turkish President Recep Tayyip Erdoğan rose to power that Iran could turn into Turkey and Turkey might morph into Iran.
Lewis meant that after the mullah regime was ousted, Iran might fulfill the hope for moderation and contribution that were once hung on Turkey, whereas Erdoğan could drive the modern and moderate Turkey he inherited into destructive radicalism in the style of the Islamic Revolution. For now, the threat from Ankara is materializing, but not the hopes for Tehran.
In addition to the disaster he has brought down on his own country, Erdoğan's megalomaniacal policies have outraged his neighbors in the Fertile Crescent, the Arabia Peninsula and the Mediterranean Basin. The damage he is causing is being discovered in Europe.

His policy is hurting American and Israeli interests. Hamas, Qatar, Azerbaijan and the government of Fayez al-Sarraj in Tripoli are his only allies.
In Europe, he poses a multifaceted threat. The NATO alliance was established by democratic nations to address the Soviet danger. Turkey was a little unusual, but gradually developed democratic characteristics, and NATO could depend on its large military. Recently, we have been seeing a stark contrast between the democratic characteristics of most NATO members and Turkey's regime of oppression.
There are hundreds of online casinos in Singapore to choose from, but few that have signup bonuses and made it onto the list of the webs best! Playing online casino games is one of the most exciting and exhilarating pastimes and when gambling at top rated sites you are assured of an exceptional experience every time.
Erdoğan's close ties with Russia, and acquisition of an air defense system that poses a threat to NATO aircraft, testify to his intentions. Erdoğan's steps to eradicate government functionaries and weaken Turkey's armed forces erode its value as a military asset. His policy is ruining Turkey's credibility; it is now a Trojan horse in NATO.
Erdoğan isn't even trying to hide the threat to European society and politics in two sensitive areas: enclaves of Turks and refugees. He is blatantly encouraging a process of radicalization among the million Turks who have emigrated to Europe since the 1970s, mainly to Germany.

That radicalization demands that they remain loyal to Turkey and their Islamic culture, at the expense of their citizenship and process of integrating into their new home countries.
In the fall of 2015, Erdoğan encouraged a wave of about a million refugees to Europe, mostly from Syria, Afghanistan and Pakistan. Given the Europeans' helplessness in addressing the matter, he struck a "protection" deal with German Chancellor Angela Merkel--he would stop the influx of refugees for a billion euros. Since then, he has been using his ability to reopen the dam as a way of extorting benefits and money from the frightened Europeans.
The danger he poses to American interests is clear, and it's hard to understand why President Trump accepts his outrageous behavior. The damage he has done to NATO hurts the United States, too.
Weakening European society through radicalized Muslim citizens and a flood of refugees also hurts Europe's ability to stand up to Russia and bolsters their already-strong tendency for pacification. Erdoğan's battle against the Kurds hurts the United States' trusted allies in Syrian and Iraq and sends a message to local forces that the Americans cannot be depended upon.
We also need to add the threats the Muslim Brotherhood--with Erdoğan's encouragement--poses to pro-American governments in Egypt, Saudi Arabia, the Persian Gulf and Jordan, and his hostile policy toward Israel. Nor does the United States want Turkish hegemony in the Mediterranean Sea.
The only American punishment meted out to Erdoğan so far--a refusal to sell him F-35 aircraft because he bought a missile system from the Russians--is no deterrent.

Israel has a long list of problems with the anti-Semitic megalomaniac from Ankara. He supports Hamas, he tried to break the maritime weapons blockade on the Gaza Strip and allows terrorists to operate in his country under Turkish passports.
He threatens Turkey's most important Arab allies, wages a pan-Islamic war against Israel in Jerusalem and sends his agents to fight it. In the Mediterranean, he threatens Israel's economic assets as well as its allies.
Erdoğan is hated and isolated. Turkey is vulnerable mostly in the economic sector. About a month ago, Moody's lowered Turkey's credit rating to B2, the lowest in the 30 years it has been measured and five steps below the rank it needs to attract investment.
Aside from his nationalist incitement and oppressive measures, Erdoğan is holding on because the economic situation remains tolerable. This is where he can be reined in, but for that to happen, we need the Americans to take the lead. Trump hasn't suggested it yet and Joe Biden will almost certainly not want anything to do with it.
Originally published at JNS.org - reposted with permission.