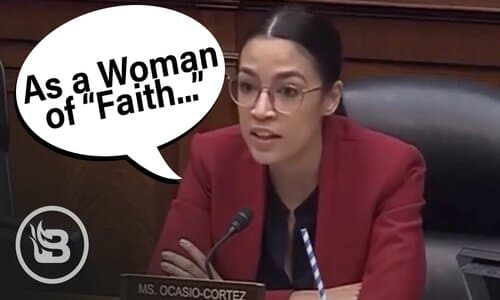 By Jonathon Van Maren/Bridgehead.ca October 14, 2020
Share this article:
In 2020, the Democrats are now a political party that repudiates virtually every Christian orthodoxy with regard to gender and marriage.
They believe that it should be legal to kill a child in the womb up until birth, and that the feticide should be funded by the taxpayer. And just to add insult to injury, they are willing to state that those who still hold to the same beliefs that Christians have held for 2,000 years are "bigots" and no better than the racists who once twisted Scripture to defend slavery.
As I explained in my 2016 book The Culture War, the Left does not claim that there is no morality so much as they claim that traditionalist Christians are on the wrong side of it.

Joe Biden has been trumpeting his alleged Catholic credentials (he is sure to put "practicing" in front of "Catholic" lest anyone should assume that he doesn't take his faith seriously), and Kamala Harris also refers to herself as a "woman of faith." Of course, the only time you'll hear the Bible actually get brought up is when they wish to use to bludgeon their ideological opponents with it.
Democrats ignore everything the Bible has to say about marriage, and sexuality, and murder. But they will cherry-pick here and there in order to claim that Christians are...well, not Christian.
At the moment, the Internet is all abuzz with a rant that Congresswoman Alexandria Ocasio-Cortez delivered in Congress back in February (National Review covered it then), claiming that traditionalist Christians are haters and that Christ would be ashamed of them. AOC, who is a "Biden Catholic," was addressing the committee on oversight and reform hearing examining LGBT rights:

If Christ himself walked through these doors and said what he said thousands of years ago - that we should love our neighbour and our enemy, that we should welcome the stranger, fight for the least of us, that it is easier... for a camel to go through the eye of a needle than for a rich man to get into a kingdom of heaven - he would be maligned as a radical and rejected from these doors.
It is part of my faith that all people are holy and all people are sacred. Unconditionally. I am tired of communities of faith being weaponised and being mischaracterised because the only time religious freedom is invoked is in the name of bigotry and discrimination.
This speech is going viral for a second time after AOC tweeted it out again with the caption: "Sick and tired of Republicans who co-opt faith as an excuse to advance bigotry and barbarism. Fact is, if today Christ himself came to the floor of Congress and repeated his teachings, many would malign him as a radical and eject him from the chamber."

Invoking God to call those who hold to the view of marriage held by virtually everyone prior to two decades ago "bigots" and "barbarians" is pretty gutsy, especially considering the sheer gruesomeness of the abortion industry AOC is so dedicated to.
Which isn't to say, of course, that God endorses one party or another. The Bible records Jesus as saying "My kingdom is not of this world" (John 18:36), so attempting to recruit the Divine into politics is a fool's errand. But what we do know is that God frowns on the rampant killing of little children that He created--and that vulnerable children in the womb are, without doubt, the "least of these."
As long as the Democrats are championing a kill count of 65 million tiny babies, perhaps AOC should skip her sermons calling on us to "love our neighbor" and to "fight for the least of us"--and reflect on the irony of demanding that we should all "love our enemy" in a speech condemning pro-life politicians as "bigots."
Originally published at The Bridgehead - reposted with permission.