Are You Prepared For The Imminent US Digital Dollar? 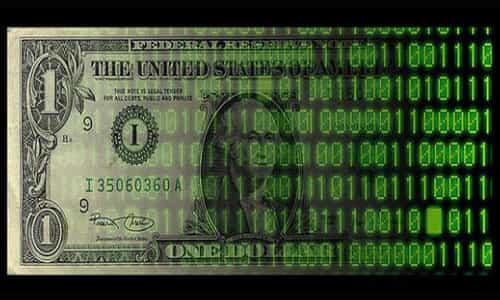 By Neenah Payne/Activist Post October 16, 2020
Share this article:
All Americans know everything costs a LOT more than it used to. However, many people don't realize that inflation is driven by how much the value of the dollar has declined in the last 100 years. The chart below shows that the dollar has lost almost all its value. End of the US Dollar?
The U.S. dollar became the dominant currency in the global economy soon after World War I. The Bretton Woods accord in 1944 solidified its position at the top. Since the dollar has been the world's reserve currency throughout their lives, many Americans assume it will continue to be so forever - or at least for the foreseeable future.
However, as the chart below shows, there have been several global reserve currencies in the last 700 years - with an average span of 94 years - and two for only 80 years. The U.S. dollar's dominance will end when a combination of factors causes investors, governments, and markets to abandon it.
The U.S. can accelerate the dollar's loss of status as the global reserve currency - and has been doing so by escalating debt, increasing inflation (which is now official Fed policy), declining domestic savings rates, and rising deficit. There have been discussions for several years about replacing the dollar with a variety of currencies including the "Amero" for the North American Union to correspond to the "euro" in the European Union and the International Monetary Fund's "Special Drawing Rights" (SDRs) - a basket of leading world currencies.
Given the fact that the dollar has lost so much of its value, it's not unreasonable to recognize that it's near the end of its run now and to consider what may replace it - and when. It's also smart to prepare for that transition now as signs continue to suggest a replacement may be coming soon.

One Bill was already proposed earlier this year by Representative Rashida Tlaib (D-MI) who floated the idea of a digital dollar to speed up the distriution of COVID relief payments.
Many have criticized the speed with which the current financial system distributed the one-time payments of $1,200 and if further distributions are bottlenecked we may see growing support in Congress for implementing such a system where something more efficient is needed for recurring monthly payments.
The Inevitable, Imminent US Digital Dollar
Just over twelve months ago, few thought the creation of a new US digital dollar...would soon be on the policy and legislative "front burner" in Congress, the Federal Reserve, and other regulatory bodies..... But over the past twelve months there were several major developments that together have radically shifted forward the probability of introducing a broadly held and transacted US digital dollar:
- Facebook's ambitious global Libra currency was announced in mid-June 2019, and it would be underpinned by blockchain technology...to service Facebook's billions of users.
- China began testing in April 2020 its digital yuan, the DCEP (Digital Currency Electronic Payment)
- US-China strategic competition and geopolitical tensions escalated
- The coronavirus pandemic struck, painfully demonstrating the antiquated nature of US monetary and financial infrastructure
- The ongoing growth in stablecoin and cryptoasset use, which present ever-growing competition to traditional fiat currencies.
- Because Facebook is a global company, the world's banks are afraid people around the world might switch to Facebook's Libra digital currency. Amazon also has a digital currency. Coins by Facebook and Amazon are called "stablecoins". JP Morgan Chase came out with its own digital coin in 2016. This key and growing shift in currency is happening outside the awareness of many Americans.

In late-March US digital dollar legislation was first introduced in Congress, and a subsequent growing stream of Congressional testimony, policy research papers, and various lobbying initiatives and proposals indicate growing momentum behind the creation of a US digital dollar....
The interest in a US digital dollar, and central bank digital currency more generally, was inspired early-on by the success of cryptocurrencies like bitcoin (BTC) and its underlying technology.....Bitcoin has reliably operated for over 11 years now, and surveys show awareness of bitcoin registering at over 80% in many countries. Tens of millions of people around the world own bitcoin, and it has a market value at present of approximately ~$175 billion USD.
While it is no longer credible to completely dismiss bitcoin's extraordinary success, the vast majority of people still (quite understandably) do not yet use bitcoin, and this is due at least in part because they find cryptocurrency to be confusing.
Indeed, the way bitcoin is primarily used today -- less as a currency for payments and more as a scarce, "hard" asset that is frequently compared to gold -- has led some including former-Bank of England Governor Mark Carney to state that bitcoin is misleadingly labeled when referred to as a currency. Instead of being called "cryptocurrency", Carney and others believe a more accurate classification label for bitcoin is "cryptoasset"....
Increasingly, a US digital dollar is viewed not only as inevitable, but necessarily imminent.... it already is clear that the lack of a US digital dollar had a severe negative impact on the ability of the government and Federal Reserve to address the current pandemic.
A US-government supported digital dollar (and wallet software) would have been extremely helpful in meeting the goal of rapidly deploying financial assistance to hundreds of millions of American citizens during this crisis.
Beyond speed, a US digital dollar would also offer a host of other benefits compared to mailing checks and other payment methods, including:
Efficiency: Reducing the cost of payment delivery, which may run into the tens of millions with postal costs, etc. for checks.
Financial inclusion: Facilitate payment to individuals lacking access to bank accounts or low-cost check-cashing services.
Support the most vulnerable: Help ensure payment to some of those most in need who lack a physical mailing address, or those who have relocated recently (eg students).
Efficacy: The receipt and use of digital payments can be more easily tracked to ensure individuals have received financial support and solve the significant "lost check" problem.

Such benefits, which are arguably just the tip of the total US digital dollar benefits iceberg....combined with the need to respond to competitive challengers like the digital yuan, Libra and decentralized cryptocurrencies like bitcoin, make the case in favor of a digital dollar extremely compelling.
The following 2020 headlines show how close we may be to a digital dollar now.
- Forbes 3/24/20: Shock U.S. Digital Dollar Proposals Set Bitcoin And Crypto Prices Alight
- Forbes 7/1/20: US Moves Closer to Digital Dollar reports: "On June 30th, the Senate Banking Committee held a hearing on the future of the digital dollar. The pressures to create a digital USD are mounting as China recently began testing its own digital currency - the DCEP, which will be included in popular applications like WeChat and AliPay. Of particular concern is widespread adoption of a digital yuan in emerging markets and in international trade."
- Wall Street Journal: The Coming Currency War: Digital Money vs. the Dollar - "Central banks are getting closer to issuing their own digital currency. If they do, the dollar might finally face real competition as the world's dominant currency."
- Coindesk 8/13/20: The Federal Reserve Is Experimenting With a Digital Dollar
- Bitcoin.com 8/14/20: US Federal Reserve Reveals Building a Digital Dollar Codebase With MIT "In addition to the Fed investigating a CBDC, Congress has proposed a number of bills discussing the invocation of a digital dollar this year. A Digital Dollar Foundation was also created in the U.S. this year."
- The Circle Is Complete: Bank of Japan Joins Fed and ECB in Preparing Rollout of Digital Currency. This 10/9/20 article says "the world's central banks are quietly preparing to unleash digital currencies on an unsuspecting population."
Originally published at Activist Post - reposted with permission.