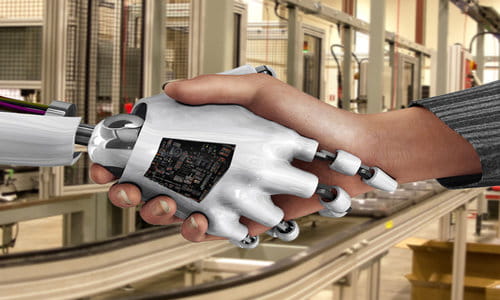 By Danny Razor/Activist Post October 19, 2020
Share this article:
A robot that makes smoothies was showcased at a Walmart in California signaling the rise of automated workers.
The Mind Unleashed has previously reported on how automated robots were beginning to take over various different jobs, including flipping burgers with Miso Robotics' Flippy. Now, Walmart has partially got involved in the trend. A new start-up company called, "Blendid" showcased its product at the Fremont Walmart in California this week opening a kiosk, Yahoo News reported.
The stall is open seven days a week and is pitched as a way for customers to place contactless orders for a smoothie. Customers place their orders for a 12-ounce delicious drink and then an autonomous robot whips it up. What's more, the drink is made in just 3 minutes or less from the time it's placed.

Digital Trends recently questioned the CEO Vipin Jain about how the robot works. Jain explained that customers use an app scanning a simple QR code at the kiosk or via the Blendid app to order. If that doesn't impress you, how about artificial intelligence that remembers your taste preferences?
Consumers use their cell phone to order by scanning a QR code at the kiosk or via the Blendid app," Vipin Jain, Blendid's CEO and co-founder, told Digital Trends. "They browse our menu of smoothies made from whole fruits, and vegetables. Once they select a drink, they customize it to their personal taste and health preferences, by modifying the amount of each ingredient as desired.
Then they place their order, and Blendid robot gets to work preparing their drink. Once the drink is ready, they receive a text with instructions for a contactless drink pickup. The robot serves the drink to them when they confirm the pickup."
While a robot taking over a job like making a smoothie might seem small, the fact Walmart has an automated kiosk in one of its California stores is a larger signal of the automation trend to come.
In fact, it was previously reported by Fox News in July that, Walmart was looking to remove all cashiers and standard conveyor belt lines from its stores and is testing a pilot in one of its superstores in Fayetteville, Arkansas in the short term.

CNN previously reported that grocers - big and small chains alike - are turning to robots for performing various tasks like cleaning floors, stocking shelves, and delivering groceries to shoppers. The CV crisis could even prompt online retail warehouses like Amazon to invest more into automation technology as well.
Walmart also isn't the first business to discuss using automation. Last year international fast-food chain McDonald's reported they would begin employing automated fryer robots throughout their different branches across the world.
Former McDonald's USA CEO Ed Rensi told Fox Business, "It's cheaper to buy a $35,000 robotic arm than it is to hire an employee who's inefficient making $15 an hour bagging French fries." McDonald's has also introduced touchscreen ordering kiosks to some of its stores.
Restaurant chains that are using automation include McDonald's, KFC, Panera, Wendy's, Dunkin' Donuts, and Arby's according to Business Insider.
Robots aren't just taking over restaurants, a report by the McKinsey Global Institute indicates there are 800 million careers (or 30 percent of the global job force)--from doctors to accountants, lawyers to journalists--that will be lost to automation by 2030. The report concludes that hundreds of millions of people worldwide will have to find new jobs or learn new skills.
A report by the University of Oxford suggests we will face a robot job apocalypse predicting that 47 percent of U.S. jobs are at risk of being replaced by robots and Artificial Intelligence over the next fifteen to twenty years.
However, with the current ongoing pandemic workers might find they are replaced quicker. Especially, any type of work that requires physical contact with a customer.
It shouldn't be surprising for the reader that's exactly what a report by A3, Association For Advancing Automation, detailed earlier this year. Stating all the ways that artificial intelligence and automation is being used in different industries to combat Covid.

Oxford Economics also published its own report warning that accelerating technological advances in automation, engineering, energy storage, artificial intelligence, and machine learning have the potential to reshape the world in 2020 through 2030s, displacing at least 20 million workers.
With Covid as a catalyst to speed up the deployment of automated machines, we can probably safely say that number will be much more severe. It seems I am not the only one to share that opinion; a recent MarketWatch article written by Johannes Moenius, a professor of global business and the director of the Institute for Spatial Economic Analysis at the University of Redlands, agrees with this author's conclusion stating "at least 50 million jobs could be automated in just essential industries."
In fact, the Brookings Institution said in a report last month that "any Covid-related recession is likely to bring about a spike in labor-replacing automation ... Automation happens in bursts, concentrated especially in bad times such as in the wake of economic shocks, when humans become relatively more expensive as firms' revenues rapidly decline."
You can watch a video of Blendid in action below: