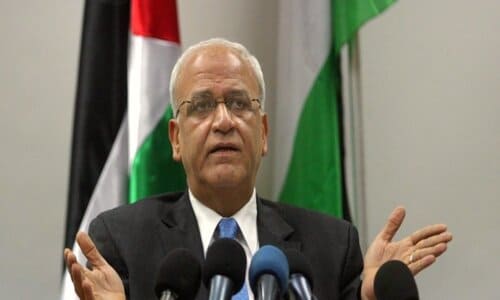 By Stephen Flatow/JNS.org October 20, 2020
Share this article:
Sure, it's ironic that a Palestinian leader who accused Israel of spreading the coronavirus has checked himself into an Israeli hospital now that he is afflicted with it. But the implications of this episode are much more significant than another chuckle over Palestinian hypocrisy.
This week's two-face is Saeb Erekat, the secretary-general of the PLO executive committee. He has served as the PLO's representative to various negotiations, and as Yasser Arafat's spokesman to the foreign news media. Among the blood libels that Erekat has spread against Israel was his loudly publicized claim in 2002 that Israel "massacred" more than 500 Palestinian Arabs in Jenin.
The actual number was 53, and they were terrorists who were killed in battle.

A more recent anti-Israel slander from Erekat was his announcement, in the official Palestinian Authority newspaper Al-Hayat Al-Jadida on March 20, that Israelis were "spitting on Palestinian cars and property in order to transfer the corona disease to them" (translation by Palestinian Media Watch).
When Erekat himself came down with the disease last week, he had many Palestinian Arab hospitals from which to choose. He could have opted to be treated at the hospital closest to his home, which is the Jericho Government Hospital.
Or he could have gone to one of the 15 hospitals in other P.A.-occupied areas, such as the "Martyr Yasser Arafat Government Hospital" in Salfit. Or one of the five hospitals in predominantly Arab neighborhoods in eastern Jerusalem.
But no, Erekat insisted on being taken to Hadassah Hospital in the Jerusalem neighborhood of Ein Kerem. And the kind folks at Hadassah took him in, despite all the Jewish blood on his hands from all those years of terrorist attacks perpetrated by the organization of which he was, and is, a senior representative.
I'm sure that was a wise decision by Erekat, from a medical point of view. No doubt any Israeli hospital is better equipped than any of the P.A.'s hospitals. If you have COVID-19, Jerusalem (or Tel Aviv or Haifa) is the place to go, not Ramallah. But the question is: Why?

It's not because Israel prohibits the P.A. from training doctors. It doesn't. And it's not because some Israeli blockade prevents the P.A. from importing medical equipment. There's no such blockade.
Rather, it's because the P.A. prefers to spend its money on guns, not butter. Or in this case--guns and terrorists' salaries, not ventilators.
The PA has one of the largest per-capita security forces in the world. The Palestinian Arab "Shehab" News Agency reported last year that the PA has "65,000 troops"--that is, policemen and various "security" units that function as a de facto army. The PA spent more than $1-billion on those forces in 2018, according to Shehab.
What in the world does the P.A. need 65,000 troops for? It's not like the P.A. has ever fought any wars, or is threatened by any country in the region. According to the Oslo accords, the P.A.'s security forces are supposed to apprehend terrorists, but they have never taken that obligation seriously, which is why the Israeli army has to keep going into P.A. areas, to capture the terrorists whom the P.A. security forces leave untouched.
Exact percentages are difficult to come by, but according to a February 2015 P.A. Ministry of Finance report, "budget allocations to the security services in Palestine's 2014 general budget amounted to 28 percent" of the total budget.

And that figure might actually have been even higher. Hassan Khreisheh, vice president of the P.A.'s Legislative Council, told the Arab media outlet Al-Monitor last year that "the security expenditures are much higher, reaching 35 percent of the public budget."
Another big chunk of the P.A.'s annual budget is used to pay imprisoned terrorists and the families of dead terrorists. Even The Washington Post, which is strongly sympathetic to the Palestinian cause, has acknowledged that in 2017, the P.A. paid $160 million to terrorists in Israeli prisons, and another $183 million to terrorists' families. That's a total investment of $343 million in the P.A.'s "pay to slay" terror program.
Imagine how many Palestinian Arab lives might have been saved if the P.A. had spent even part of that money on medicine and equipment to combat the coronavirus. Why, even Saeb Erekat might agree to be treated in a P.A. hospital!
The issue is important because there are some elements in the Democratic Party who argue that if they win the White House, U.S. funding to the P.A. should be resumed.
The reality of how the P.A. chooses to spend its money, however, offers a sober reminder of what a terrible mistake it would be to resume the old, failed policy of throwing American taxpayer dollars down that black hole known as the P.A. bank account.
Originally published at JNS.org - reposted with permission.