"Why Are You Killing Christians?" Trump Asks Nigeria's President 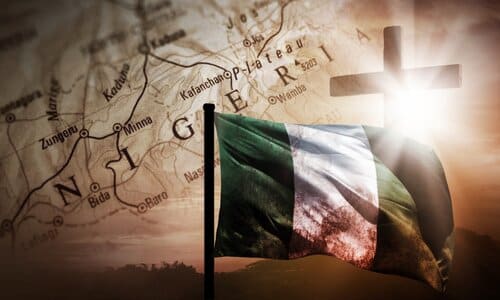 By Raymond Ibrahim/Gatestone Institute October 26, 2020
Share this article:
"Why are you killing Christians?" US President Donald J. Trump apparently shocked his Nigerian counterpart, Muhammadu Buhari, by asking this question the first time they met in the White House in April 2018. The Nigerian president admitted this, according to a September 8, 2020 report, toward the end of a recent talk with his cabinet members:
"When I was in his office, only myself and himself, with Allah as my witness, he looked at me in the face and said 'why are you killing Christians?' I wonder, if you were the person how you would react? I hope what I was feeling inside did not betray my emotion..."
He should not have been shocked. Several international observers characterize what Nigerian Christians experience not just as "persecution" but as a "pure genocide."

Since 2009, "not less than 32,000 Christians have been butchered to death by the country's main Jihadists," according to a May 2020 report. Hundreds more have been killed since then. Earlier this year, Christian Solidarity International issued a "Genocide Warning for Christians in Nigeria" in response to the "rising tide of violence directed against Nigerian Christians and others classified as 'infidels' by Islamist militants...."
Under Buhari, who became Nigeria's president in 2015, the carnage of Christians has only accelerated. According to a March 8, 2020 report, titled, "Nigeria: A Killing Field of Defenseless Christians,"
Available statistics have shown that between 11,500 and 12,000 Christian deaths were recorded in the past 57 months or since June 2015 when the present central [Buhari-led] government of Nigeria came on board. Out of this figure, Jihadist Fulani herdsmen accounted for 7,400 Christian deaths, Boko Haram 4,000 and the 'Highway Bandits' 150-200."
In just the first four months of 2020, Fulani herdsmen and other terrorists "hacked to death ... no fewer than 620 defenseless Christians," and engaged in the "wanton burning or destruction of their centers of worship and learning":
"The atrocities against Christians have gone unchecked and risen to alarming apogee with the country's security forces and concerned political actors looking the other way or colluding with the Jihadists. Houses burnt or destroyed during the period are in their hundreds; likewise dozens of Christian worship and learning centers."
How have formerly simple and unarmed Fulani herdsmen managed to kill, since 2015, nearly twice as many Christians as the "professional" terrorists of Boko Haram -- and exponentially more Christians than under Buhari's (Christian) predecessor, President Goodluck Jonathan? "Because," according to numerous Christian leaders in Nigeria, "President Buhari is also of the Fulani ethnic group," to quote Nigerian bishop Matthew Ishaya Audu.

The bishop is only one of a growing chorus of voices accusing the Muslim president not only of turning a blind eye to his clansmen's slaughter of Christians, but actively exacerbating it -- including with fighter jets. A few examples:
The Buhari government is "using the levers of power to secure the supremacy of Islam... The only difference between the government and Boko Haram is that Boko Haram is holding the bomb." -- Bishop Matthew Hassan Kukah.
Buhari "is openly pursuing an anti-Christian agenda that has resulted in countless murders of Christians all over the nation and destruction of vulnerable Christian communities." -- Bosun Emmanuel, secretary of the National Christian Elders Forum.
"Under President Buhari, the murderous Fulani herdsmen enjoyed unprecedented protection and favoritism... Rather than arrest and prosecute the Fulani herdsmen, security forces usually manned by Muslims from the North offer them protection as they unleash terror with impunity on the Nigerian people." -- Musa Asake, general secretary of the Christian Association of Nigeria.
In a statement issued earlier this year, the Christian Association of Nigeria, an umbrella group representing most denominations, repeated that "the federal government under President Muhammadu Buhari" is "colluding" with the Islamic terrorists "to exterminate Christians in Nigeria."
Even the average persecuted Christian is aware of Buhari's alleged role. After Muslim Fulani killed five Christians in a mini-store, Ibrahim Agu Iliya, a local Christian, explained why the terrorists were able to shoot for a full ten minutes -- despite the presence of armed security -- before absconding without a trace:
"These Muslim Fulani herdsmen have been attacking our communities because we are Christians. Their desire is to take over our lands, force us to become Muslims, and if we decline, they kill us.... The government's inability to stop these Muslim Fulani herdsmen is because the government is being controlled by Fulani political leaders headed by Muhammadu Buhari, Nigeria's president, who's also a Fulani man."

Some Nigerian leaders blame Buhari's rise to power on "the evil called Barack Obama" -- in the words of Femi Fani-Kayode, Nigeria's former Minister of Culture and Tourism, on February 12:
"What Obama, John Kerry and Hilary Clinton did to Nigeria by funding and supporting Buhari in the 2015 presidential election and helping Boko Haram in 2014/2015 was sheer wickedness and the blood of all those killed by the Buhari administration, his Fulani herdsmen and Boko Haram over the last 5 years are on their hands."
It was doubtless these disturbing statistics and accusations against Buhari that prompted Trump to ask why he was "slaughtering Christians in Nigeria."
How did Buhari respond? He blamed "climate change and population growth."
"I tried and explained to him," continued Buhari, that "this has got nothing to do with ethnicity or religion. It is a cultural thing."
Not only does such an argument ignore that culture often emerges from the blending of ethnicity and religion; it also fails to answer the central question: "Since the government and its apologists are claiming the killings have no religious undertones," the Christian Association of Nigeria asked, "why are the terrorists and herdsmen targeting the predominantly Christian communities and Christian leaders?"
Similarly, as members of the Christian Association of Nigeria evidently wonder:
"How can it be a [secular or economic] clash when one group [Muslims] is persistently attacking, killing, maiming, destroying, and the other group [Christians] is persistently being killed, maimed and their places of worship destroyed?"
As Sister Monica Chikwe once explained, "It's tough to tell Nigerian Christians this isn't a religious conflict since what they see are Fulani fighters clad entirely in black, chanting 'Allahu Akbar!' and screaming 'Death to Christians.'"
Originally published at Gatestone Institute - reposted with permission.