Petra Unearthed: A Citadel For The End Of Days 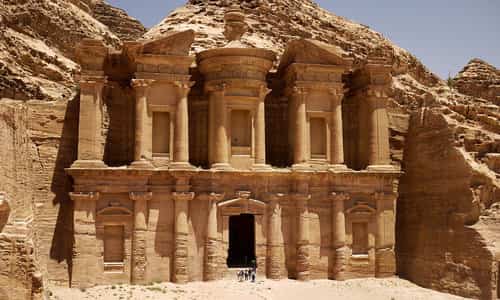 By PNW Staff June 22, 2016
Share this article:
Could new discoveries in Petra, the lost city of rock, indicate the site of Israel's fortress in the end times? War rages in Iraq and Syria while terrorist armies threaten Turkey, Saudi Arabia, Jordan, Israel and even Europe and the United States.

The self-proclaimed Islamic State has, as their stated goal, to bring Christian (infidel) armies into a final conflict that they believe will bring the tribulation in Dabiq, Syria, a little over 500 miles from the ancient fortress of Petra.
It isn't hard to conclude that the events are accelerating now which herald the end of days, especially with the new archeological discovery in Jordan that provides new mysteries to the ancient city of Petra, also known as Sela.
The ruins of Petra are found south of Amman and its strategic significance can be found in the origins of its name in both Greek and Hebrew, Petra and Sela the word for rock in both languages. Sela, as it is known in the Bible, was literally carved from stone and served as both a defensive position and trade hub for millennia.
Believed to have been built by the Nabateans as their capital in 312 BCE, shortly after the time of Alexander the Great, it was rediscovered in 1812 and only today with satellite imagery have archeologists been able to piece together some of the discoveries made on the ground.
Remarkable for being a city carved into the cliffs, the Bible describes in the books of Obediah and Jeremiah the stone cities carved from the mountain by the Nabateans, descendants of the Biblical Edom. Rome would later conquer Petra and garrison it, recognizing its value for trade as well as its natural qualities as a fortress.
Ancient peoples often situated fortresses on hilltops, and there are several such strong points near Petra, while trade centers occupied valleys where travel was easier. Petra is able to fulfill both roles, accessible to trade while its natural rock faces served as a choke point for invading armies of the ancient world and could defend against bombs and artillery of the modern world, even radiation, some experts speculate.
But if the city lies in ruins, why are recent discoveries significant? Biblical prophecy suggests a yet future role for this city in the period of time known as "The Great Tribulation".
This 7-year period is when the Antichrist rules the world and eventually unleashes his wrath against Israel.
In Matthew 24:15-16 Jesus warns, "when you see the abomination of desolation spoken of by the prophet Daniel, standing in the holy place (let the reader understand), then let those who are in Judea flee to the mountains."
Prophetic passages like Micah 2:12 and Isaiah 63:1-6 describe the area of Petra in Jordan as one of the potential places where Jews will flee when the Antichrist begins persecution. It is this area that mysteriously remains free of the Antichrist reign.
"He will enter the glorious land of Israel, and many nations will fall, but Moab, Edom, and the best part of Ammon will escape," Daniel 11:41 says.
Moab, Edom and Ammon are all in Jordan. In fact, Ammon which is now known as Amman, is the capital and most populous city of Jordan.  It is unclear why Jordan would be spared from the rule of the Antichrist however WorldNetDaily might have some insights based on a tour they took their many years ago.
In 2000, WorldNetDaily traveled to Petra with the Amman-based Mossad intelligence agent Avi Rubin -- a former airborne commando in the Israel Defense Force. Rubin explained that Petra might be the ultimate defensive position in a regional war.
"It is an outstanding defensive position. Airborne assault would be most difficult. It is what I would call a natural defensive position. The Roman legions, the Crusaders, the Arabs and now the IDF, Iraq and the Jordanian army all recognized this," said Rubin.
"The most important defensive feature is called 'the Shiq,' which is about 2,000 meters long. [Today, the passage is marked by the 'Indiana Jones' souvenir shop.] It is a narrow passageway which leads into the city. It has very high, sheer walls which will protect the Israeli population as they enter the city from the west. The rocks of Petra can help protect from gunfire, bombing, artillery and perhaps even absorb some radiation."
Rubin said that both the IDF and the Mossad had examined Petra from a strategic and military perspective.

Amos 9:11-12 states that "'On that day I will raise up the tabernacle of David, which has fallen down, and repair its damages; I will raise up its ruins, And rebuild it as in the days of old; That they may possess the remnant of Edom, and all the Gentiles who are called by My name,' Says the Lord who does this thing."
In verses 13 and 14 of the Book of Amos, it goes on to instruct, "'Behold, the days are coming,' says the Lord," and "I will bring back the captives of My people Israel; They shall build the waste cities and inhabit them." Could Petra, the remnant of Edom, be one such "waste city"?
These ruins, which to many people are known through the "Indiana Jones and the Last Crusade" movie have been studied since they were discovered by the Swiss in 1812 are now finally being understood in a new light thanks to the use of satellite imagery, drone photography and modern survey techniques.
Archeologists Sarah Parcak, a National Geographic fellow, and Christopher Tuttle, with the Council of American Overseas Research Centers, have recently located a unique platform structure using previously unavailable methods. The platform measures 184 by 161 feet but contains a second platform, built on top that includes columns and a staircase.

"We know it's large, it's significant, it's important. It probably would have had some kind of a public function," archaeologist Sarah Parcak told NPR. "Could it be used for religious purposes? Was it some sort of public administrative structure? I wish I knew."
Perhaps it is not a coincidence, that just now as global conflict accelerates, the city of Petra is receiving new attention.
What is clear however is that there are far more secrets and signs beneath the rock than we once believed.