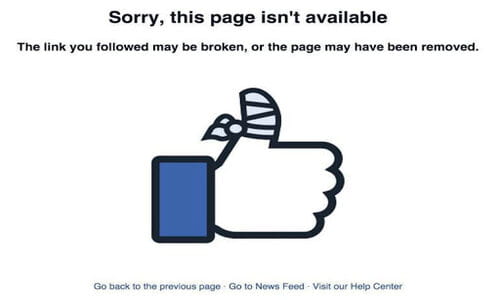 By Peter Sprigg/FRC October 29, 2020
Share this article:
Most Americans -- Democrats and Republicans -- know that social media engages in political censorship. And you would have to be naïve not to see that conservative viewpoints are the chief victims -- as documented daily at https://censortrack.org/ (although some still try to deny it).
Some of the complaints involve subtle discrimination -- what shows up in someone's news feed for example. But this week, one Christian organization has suffered the Facebook equivalent of capital punishment, by having all of their content removed. Try to access the Facebook page for Restored Hope Network (RHN), and all you will see is the ominous message, "This Page Isn't Available. The link may be broken, or the page may have been removed."

Facebook's ax came down on RHN with no advance notice, and no explanation. Restored Hope Network (their website, fortunately, is still up) is the world's leading network of Christian ministries serving those with unwanted same-sex attractions.
They believe that through a combination of psychological insight and spiritual transformation, it is possible to see a reduction in such attractions, and many have testified to experiencing such change. In addition, they hold that any believer in Christ has a right to seek the help of others in living a life that conforms to the moral teachings of Scripture.
LGBT activists, however, have dubbed such sexual orientation change efforts (SOCE) as "conversion therapy" (a term never used by those in the field), and are waging war upon it. Facebook is obviously responding to pressure from such activists, who claim (falsely) that there is no evidence such counseling is effective and abundant evidence that it is harmful.

A Facebook official in Europe announced in July a policy to bar content promoting so-called "conversion therapy." A few days later, the left-wing media watchdog Media Matters gave its own recommendation of some groups it thought Facebook should censor -- including Restored Hope Network.
They included three examples of RHN Facebook posts -- none of which support the idea that allowing people to seek change is a form of "hate speech." One features a quote from Dr. Linda Seiler, who formerly identified as transgender, who states, "Regular science shows you're not hardwired, born this way."
Recent research debunking the theory of a "gay gene" shows Seiler is right. Another advertises a video by Joe Dallas, a long-time ex-gay leader, "Why Am I Gay? Why Can't I Change?" and says that "women and men in our congregations are asking that very question."
This is clearly directed at the church, and censoring it is blatant anti-Christian bigotry.
Finally, a promo for an RHN conference features Anne Paulk, a former lesbian who is the Executive Director of Restored Hope Network, saying, "Homosexuality is a relational deficit that needs a relational solution." While some may take offense at the word "deficit," this was a statement about the origins of same-sex attractions, and the "solution" for people who voluntarily seek to overcome them.

This focus on the causes of same-sex attraction is squarely within the realm of mainstream scientific debate. Even the American Psychological Association, though critical of SOCE, has said: "Much research has examined the possible genetic, hormonal, developmental, social and cultural influences on sexual orientation... Many think that nature and nurture both play complex roles..."
When grilled about "the cancel culture mob" at a congressional hearing in July, Facebook founder Mark Zuckerberg said, "I believe strongly in free expression. Giving people a voice is an important part of what our services do, and I'm very worried about some of the forces of illiberalism that I see in this country that are pushing against free expression." If Zuckerberg meant what he said, he should un-cancel Restored Hope Network immediately.
Originally published at Family Research Council - reposted with permission.