Preparing For The National Meltdown No Matter Who Wins 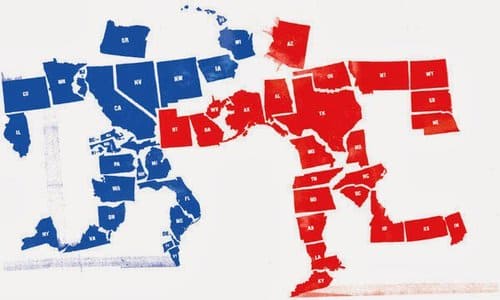 By Michael Snyder/Economic Collapse Blog October 29, 2020
Share this article:
Right now we are experiencing the calm before the storm.  Many Biden supporters believe that a Trump victory would literally be the worst thing that could possibly happen to our country, but at the moment most of them are quite confident that Biden will win.
Likewise, many Trump supporters are absolutely convinced that we will plunge into a horrifying socialist abyss if Biden wins, but for now most of them are convinced that the polls are wrong and that Trump will pull out another victory in November.
So with just a shot time left until Election Day, most Americans that really care about politics are pacified because they believe that a positive outcome is right around the corner.
But soon that will change, and tens of millions of Americans will simultaneously melt down emotionally right in front of our eyes.

I think that just about everyone realizes that this national temper tantrum is coming.  It is just that most of those that deeply care about politics assume that it will happen to the other side.
At this point, even Facebook is preparing for the worst.  In fact, they are getting ready to implement "emergency measures" that are usually reserved for the most "at-risk" countries...
As the U.S. braces for election-related unrest next month, Facebook executives are implementing emergency measures reserved for "at-risk" countries in a company-wide effort to bring down the online temperature.
The Wall Street Journal reported Sunday that the social media giant plans to limit the spread of viral content and lower the benchmark for suppressing potentially inflammatory posts using internal tools previously deployed in Sri Lanka and Myanmar.
So what would those "emergency measures" look like?  Well, that could potentially even include manipulating your news feed to alter what sort of content you are allowed to see...
Facebook has a number of options it could take including "slowing the spread of viral content and lowering the bar for suppressing potentially inflammatory posts" and "tweaking the news feed to change what types of content users see," the Wall Street Journal reported.
Of course Facebook has already been manipulating our news feeds for a very long time, but that is a topic for another article.
Personally, I absolutely detest all of the censorship that the big social media companies have been doing, and I am not surprised that they are preparing to go even further.

According to Facebook, these new "emergency measures" will be implemented if there is "election-related violence"...
However, the social media colossus only plans to put these restrictions in place in the event of election-related violence (something many others are fearful of and preparing for). However, during a staff meeting CEO Mark Zuckerberg said "a decisive victory from someone" could "be helpful for clarity and for not having violence or civil unrest after the election" which would reduce Facebook's need to step in.
Considering the fact that we are seeing election-related violence almost constantly now, I would say that there is a pretty good chance that Facebook will actually proceed with these emergency measures.
Meanwhile, the Washington Post is also deeply concerned about what this election may do to our nation.  In a very long article that they just published, they discussed the fact that both sides are convinced that "the wrong outcome will bring disaster"...
In almost every generation, politicians pose certain elections as the most important of their time. But the 2020 vote is taking place with the country in a historically dark mood -- low on hope, running on spiritual empty, convinced that the wrong outcome will bring disaster.
"I've never seen anything like it," said Frank Luntz, a Republican political consultant who has been convening focus groups of undecided voters for seven presidential cycles. "Even the most balanced, mainstream people are talking about this election in language that is more caffeinated and cataclysmic than anything I've ever heard."
Emotions were definitely running high in 2016, but we have never seen anything quite like this.
Most Democrats believe that Trump and his supporters are deeply evil, and likewise most Republicans believe that Biden and his supporters are deeply evil.
And of course there are also many that are entirely convinced that all of them are deeply evil.
When you have a nation that is this deeply divided, how is anyone ever going to be able to bring us together in unity?

It has been said that a house divided with surely fall, and at this point our divisions have brought us to the verge of national collapse.  Here is more from the Washington Post...
But now, the worry on the right that a Democratic win would plunge the nation into catastrophic socialism and the fear on the left that a Trump victory would produce a turn toward totalitarianism have created "a perilous moment -- the idea that if the other side wins, we're in for it," said Peter Stearns, a historian of emotions at George Mason University.
"The two sides have come to view each other not as opponents, but as deeply evil," he said. "And that's happening when trust in institutions has collapsed and each group is choosing not to live near each other. It seems there's no middle ground."
But as I pointed out at the beginning of this article, for now both sides are relatively calm because they both believe that they are going to end up winning.
In 2016, the big national polls were dead wrong and Trump pulled out a close victory when the mainstream media had assured everyone that it was inevitable that Hillary Clinton would win.
And once again this year there are indications that the big national polls may be flawed and that Trump may be doing significantly better than the mainstream media is telling us.
On the other hand, Hillary Clinton never came close to the 50 percent mark in most national polls in 2016, and Joe Biden has consistently been above that level in recent weeks.  Democratic operatives would have us believe that indicates that there are far fewer undecided voters this time around.
So I guess we will just have to wait until the real results start coming in to see who was right and who was wrong.
Because so many Americans are voting by mail, it is going to take a lot longer than usual to count all the votes, and a number of key swing states are likely to be very close.  If the results are close enough, it may take weeks before we have an official winner.
Once an official winner is finally declared, there will be tens of millions of Americans in deep emotional pain.
When all of those deeply hurting people start lashing out, you won't want to be anywhere around.
Originally published at The Economic Collapse Blog - reposted with permission.