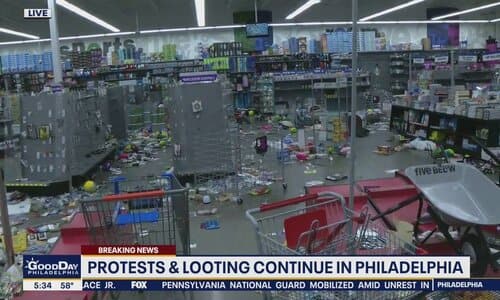 By Tony Perkins/Family Research Council October 31, 2020
Share this article:
Philadelphia is burning, 14 more officers were injured, and what is Joe Biden talking about? Transgender bathrooms.
With absolute tone-deafness, the former vice president spent Wednesday afternoon talking to Pennsylvania reporters about his extreme LGBT priorities instead of the chaos breaking out on city streets.
His "day one" agenda -- which would end religious freedom as we know it -- has been a bizarre fixation for the Democratic candidate, but beware: it's a sincere one.

The man who outed Barack Obama on same-sex marriage in 2012 has been a true loyalist in the cause, insisting eight years ago (when most Democrats wouldn't touch the issue) that transgenderism is the "civil rights issue of our time."
Unlike his other moves to the far-Left, this radical insistence that we ignore science, biological norms, empower children to mutilate their bodies, and force schools, businesses, and churches to bow at the Left's alter of transgenderism is real.
And Biden himself has made it quite clear: it will be the cornerstone of his administration.
There is "no room for compromise," he warned, on "transgender rights." That means there's no room for compromise when it comes to abolishing girls' sports, forcing employers to pay the sky-high bills for hormone therapy and gender reassignment surgery, destroying Christian schools, Catholic hospitals, and nonprofit charities from food banks to homeless shelters.

We're talking about a piece of legislation, the Equality Act, that hunts down and punishes the same evangelicals whose vote he claims to want! One that also ends girls' and boys' bathrooms, Christian counseling, privacy laws, conscience protections, medical ethics, and parents' rights.
If you can imagine a man in every girls' shower and a drag queen in every library, that's Joe Biden's priority. "This is our soul, da**it," he has said. "This is who we have to be..."
"I will just flat-out change the law," Biden told a mom with a transgender-identifying third grader. A man who would encourage the sterilization and surgical maiming of a young, impressionable child is no moderate. He is promoting a level of LGBT fanatism that rivals anyone in U.S. politics. As Abigail Shrier pointed out in this powerful interview, he's even putting himself at odds with progressive parents.
And don't buy the line that he respects your opinion to the contrary. When Joe Biden stood on stage in the second presidential debate and insisted that he would be an "American president" who represents "all of you," just remember what he said about conservatives in 2018.
The same man who sanctimoniously said he didn't see "blue states and red states" but "the United States" made his disgust of anyone who disagrees with his fringe agenda crystal clear. They're "virulent people," he said with contempt, "the dregs of society."
Does that sound like a man who will bring "decency" and "civility" to the country?
This is not the Joe Biden you thought you knew in the U.S. Senate. In fact, the Wall Street Journal is so concerned about the dangerous agenda lurking behind the former vice president that the editors decided to spell out the gory details for anyone foolish enough to believe the lie that he'll govern from the middle.

"The former Vice President is running as a reassuring moderate, a man of good character who can reunite the country and crush Covid-19 after the disruptive Trump Presidency. Yet he also is running on the most Left-wing policy program in decades.
Voters have little idea about these policies because Mr. Biden mentions them only in the most vague, general terms. The press barely reports them. Americans may think they're voting for Joe's persona, but they will get the platform of Kamala Harris, Nancy Pelosi, Elizabeth Warren and Bernie Sanders..."
A rude awakening awaits anyone who believe the cheerful lie that Joe will govern from the middle.
On issues as fundamental as basic biology, the middle is a place he's never visited -- nor will he, with Kamala Harris by his side.  For the truth about the transgender agenda and how it affects kids, make sure you watch and share Abigail Shrier's segment on the topic.