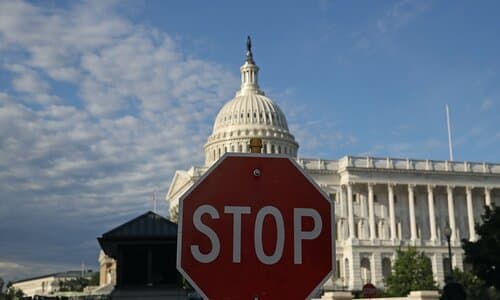 By Jonathon Van Maren/Bridgehead.ca November 06, 2020
Share this article:
As I noted yesterday, there was a lot of good news on election night. Over at The Week, Democrat Damon Linker wrote a scathing analysis titled "The Left Just Got Crushed," and his take should encourage all conservatives as we await the final presidential results:
Biden is on track to be a weak, ineffectual president governing at the mercy of Mitch McConnell's Machiavellian machinations. So much for the Democratic fantasy -- the one that seemingly never dies -- of unobstructed rule. Democrats didn't just want to win and govern in the name of a deeply divided nation's fractured sense of the common good. No, they wanted to lead a moral revolution, to transform the country -- not only enacting a long list of new policies, but making a series of institutional changes that would entrench their power far into the future.
Pack the Supreme Court. Add left-leaning states. Break up others to give the left huge margins in the Senate. Get rid of the Electoral College. Abolish the police. Rewrite the nation's history, with white supremacy and racism placed "at the very center." Ensure "equity" not just in opportunity but in outcomes. Hell, maybe they'd even establish a Truth and Reconciliation Commission to teach everyone who voted for or supported the 45th president just how evil they really are...

Yes, Trump and the Republican cheerleading section online and on cable news and talk radio harped on every extreme proposal. But this wasn't just a function of the fallacy of composition, where one loony activist says something off the wall and the GOP amplifies it far beyond reason in order to tar the opposition unfairly.
These were prominent Democrats -- progressive politicians, activists, and scholars and prize-winning journalists at leading cultural institutions -- talking this way. Joe Biden himself usually did the smart thing and tried to distance himself from the most radical proposals. But in the end it wasn't enough to mollify fears of an ascendant left hell bent on entrenching itself in power and enacting institutional reforms that would enable it to lead a moral, political, and cultural revolution.
And therein lies a paradox that should be obvious but apparently isn't: Democrats live in a country with a large, passionate opposition. Arrogant talk of demographic inevitabilities and transformative changes to lock Republicans out of power in the name of "democracy" has the effect of inspiring that opposition to unite against them, rendering political success less assured and more tenuous.
There will be no court packing. No added states. Nothing from the toxic progressive-fantasy wishlist will come anywhere close to passing. Instead, we will have grinding, obstructive gridlock. Some will demand that Biden push through progressive priorities by executive order.
But every time he does -- like every incident of urban rioting and looting, every effort to placate the left-wing "Squad" in the House, every micro-targeted identity-politics box-checking display of intersectional moral preening and finger-wagging -- the country will move closer to witnessing a conservative backlash that results in Republicans taking control of the House and increasing their margin in the Senate in November 2022, rendering the Biden administration even more fully dead in the water.

In short, Linker says, it is time for the Democrats to realize that half of America cannot simply be crushed--and that this election, with its "blue wave" that never came, is a stunning repudiation of the revolution Democrats desperately want to unleash:
So please, Democrats, look in the mirror and show a little humility. You're not nearly as self-evidently wonderful or widely loved as you'd like to believe. You are not destined to prevail anywhere. You share a country with a large group of people who hate your guts, and who aren't going to submit to your rule or go along with your giddy plans to remake the nation in your image.
It's time to start acting like you understand this implacable fact and all it implies about the limits of your power and the parameters of the possible. American politics is a war of attrition right now. The sooner Democrats learn to live with that fact, the better.
There is a growing consensus in the media that Democrat plans for America have been foiled. As Bloomberg put it, "many of the fondest hopes of [Biden's] party and darkest fears of his opponents will be unrealized." Having failed to retake the Senate (and lost ground in the House), "every inch of liberal legislative gains will be an uphill struggle. Court packing is dead. If the 6-3 Republican advantage on the Supreme Court changes, it will have to be the old-fashioned way."
Over at The American Conservative, Rod Dreher put it this way:
This election was a massive repudiation of Wokeness and identity politics. It should give conservative politicians the courage to go on the attack against it within institutions. If Trump holds the executive branch, the Justice Department, the EEOC, the Education Department, and others ought to put the fear of God into the likes of Smith College and Woke Capitalists. Despite what Stacey Abrams and other leading Democrats want to believe, there can be no illusion that the future of America is identity politics.

Rusty Reno over at First Things agrees, noting that populism has prevailed, and that an extraordinary opportunity for new GOP coalitions exists so long as conservatives learn the right lessons from the last four years:
2016 shocked our leaders. Whatever the final outcome, this week reminds us that a substantial portion of the American electorate--enough to put a man in the White House--no longer takes guidance from our cultural and political establishment.
As a consequence, these Americans are disenfranchised--not in an electoral sense (Trump may end up winning), but in a cultural and ideological sense. As the last four years have shown, this substantial element of the electorate is deprived of a richly elaborated and coordinated social and political agenda by which to focus their anger and frustration... This is likely to remain the case.
Which means that when Trump leaves the scene (whether in January 2021 or after a second term), a vast body of voters will remain available for Republican politicians who are willing to venture beyond the safety of elite-authorized views. The task for intellectuals and activists on the right is to craft a vision for the future of the country--one that addresses rather than ignores the reasons why so many voters chose someone thoroughly opposed by the Great and the Good.
I'll reiterate what I said yesterday: I feel good about what happened the election thus far. All of the Doomsday scenarios appear to have been averted--the Equality Act, the expansion of the Supreme Court, enshrining Roe v. Wade in statute, and so on.
The judges entrenched by Trump both on the Supreme Court and elsewhere are lifetime appointments, and even if Biden does what he can with executive orders (if he is elected), he'll be prevented from doing permanent damage that cannot be undone by a future Republican president which, despite Democrat promises that demography is destiny, is possible, if not likely.
On Monday, many of us were poised for the Democrats to unleash a moral revolution. The Democrats were certainly hoping to do so--but the American people stopped them in their tracks.
Originally published at The Bridgehead - reposted with permission.