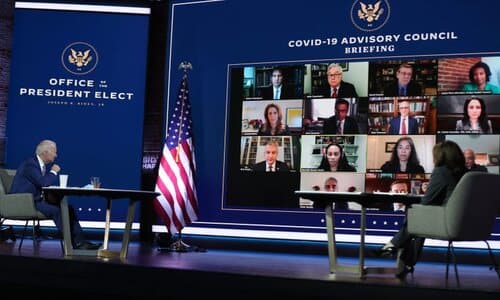 By Adam Eliyahu Berkowitz/Breaking Israel News November 11, 2020
Share this article:
On Monday morning, the Democratic candidate for the presidency, Joe Biden, announced his proposed 13-person coronavirus task force. A closer look reveals that some of the members of that task force have a predisposition towards allowing (or perhaps even inducing) the most at-risk group, the elderly, to simply die.
BIDEN'S CORONAVIRUS TASK FORCE: MEDICAL ETHICS?
"Our work begins with getting COVID under control," Biden said in his address on Saturday. "That plan will be built on bedrock science. It will be constructed out of compassion, empathy, and concern."
His appointments to the task force do not seem to reflect these traits of compassion.
One appointee, Dr. Ezekiel Emanuel. There is no question that Dr. Emanuel, who was assigned several prominent roles in the Obama administration, is eminently qualified. He is the chair of the Department of Medical Ethics and Health Policy at the University of Pennsylvania.

He did a  residency in internal medicine at Boston's Beth Israel Hospital and his oncology fellowship at the Dana-Farber Cancer Institute. He brings with him experience in public health as an Associate Professor of Medicine, Social Medicine and Clinical Epidemiology at Harvard Medical School.
But it is precisely his "expertise" in medical ethics that is troubling to many. In his book on medical ethics titled The Ends of Human Life,  Emanuel argued that a doctor's oath would never allow him to administer a lethal injection for capital punishment as a doctor, although the issue would be different if he were asked to serve on a firing squad not as a doctor but rather as a citizen.
He said that in the case of mercy killing there are rare cases where the medical obligation to relieve suffering would be in tension with the obligation to save a life, and that a different argument (an argument that intentional killing "should not be used to achieve the legitimate ends of medicine") would be required instead.
In one example, he described the case of an AIDS patient, he discussed the issues of bed-allocation based on expected chances of survival and the cost of long-term care. In the book, he also discussed the "moral dilemma" posed by babies born with serious birth defects and brain-damaged patients on respirators
His conclusion was that  "liberal communitarianism" could be the answer, a process by which "citizens... should be given rights needed to participate in democratic deliberations based on a 'common conception of the good life'" Under this system, vouchers could be granted through "Community Health Programs " each of which would decide which services would be covered as basic, and which services would not be covered.
It should be emphasized that Emanuel claims to oppose legalizing euthanasia. He is, as noted above, an expert with vast experience in a multitude of difficult cases forming nuanced views on life or death issues that are not black or white.
He has been the focus of controversy and some of his opponents have misconstrued his policies. In one article he co-wrote in The Lancet in 2009 discussing different approaches to allocation of very scarce medical interventions such as organs and vaccines, Ezekiel favored an approach that heavily favored a decision-making process weighted in favor of "saving the most years of life. "
In a March 12 New York Times op-ed he co-authored Emanuel applied this principle to the current pandemic, arguing that the fast-spreading coronavirus could require hospitals to make health care rationing decisions. In such a case, Ezekiel argued, health care should be determined not on a coincidental "first-come, first-serve". Rationed health care should be given to those "who are likely to get the greatest benefit from care" and "[t]he goal should be saving as many people as possible."
DR. EZEKIEL: LIFE AFTER 75 NOT WORTH LIVING
This belief is also reflected in his perception of old age. Ezekiel believes that after age 75, life is not worth living, and the pursuit of longevity is not a worthwhile goal for health care policy. This belief was expressed in a 2014 essay in The Atlantic:
Here is a simple truth that many of us seem to resist: living too long is also a loss. It renders many of us, if not disabled, then faltering and declining, a state that may not be worse than death but is nonetheless deprived. It robs us of our creativity and ability to contribute to work, society, the world. It transforms how people experience us, relate to us, and, most important, remember us. We are no longer remembered as vibrant and engaged but as feeble, ineffectual, even pathetic.

By the time I reach 75, I will have lived a complete life. I will have loved and been loved. My children will be grown and in the midst of their own rich lives. I will have seen my grandchildren born and beginning their lives. I will have pursued my life's projects and made whatever contributions, important or not, I am going to make. And hopefully, I will not have too many mental and physical limitations. Dying at 75 will not be a tragedy.
Once I have lived to 75, my approach to my health care will completely change. I won't actively end my life. But I won't try to prolong it, either. Today, when the doctor recommends a test or treatment, especially one that will extend our lives, it becomes incumbent upon us to give a good reason why we don't want it. The momentum of medicine and family means we will almost invariably get it...
But 75 defines a clear point in time: for me, 2032. It removes the fuzziness of trying to live as long as possible. Its specificity forces us to think about the end of our lives and engage with the deepest existential questions and ponder what we want to leave our children and grandchildren, our community, our fellow Americans, the world. The deadline also forces each of us to ask whether our consumption is worth our contribution.
It should also be noted that Emanuel is an advocate of guaranteed universal health care which is associated with legalized euthanasia in many countries.
EUTHANASIA AND SOCIALIZED MEDICINE
Abortions and assisted suicides are both prohibited by the Noahide Law which prohibits the spilling of blood. This is based on a verse in Genesis.
Whoever sheds the blood of man, By man shall his blood be shed; For in His image Did Hashem make man. Genesis 9:6
Ideally, euthanasia is performed at the patient's request by passive means, withholding treatment necessary for the continuance of life. Euthanasia can also be carried out actively by lethal injection. Passive voluntary euthanasia is legal throughout the US per Cruzan v. Director, Missouri Department of Health.
When the patient actively brings about his or her own death by lethal injection with the assistance of a physician, the term assisted suicide is often used instead. Assisted suicide is legal in Switzerland and the U.S. states of California, Oregon, Washington, Montana, and Vermont.

Non-voluntary euthanasia is when the patient is unable to give his consent or against his will. This is technically illegal in all countries but there have been cases in which the state and legal system have usurped the position of the parents and decided to euthanize a child.
In discussions concerning healthcare reform, Canada is often held up as a model for the success of socialized medicine but the issue of euthanasia is rarely discussed. Euthanasia has now become an official program in the Canadian healthcare system called Medical Assistance in Dying (MAiD). Signs instructing patients in how to access the program via its toll-free number are prominently displayed in some hospital urgent care waiting rooms.
European countries with socialized healthcare are adopting euthanasia and many are broadening the scope of assisted suicide as an option. Though not all countries with universal health care have legalized euthanasia, all of the countries that have legalized euthanasia (Netherlands, Belgium, Columbia, Luxembourg, Canada, Switzerland, and Germany) have universal health care. There are currently six states in the U.S. with legalized euthanasia.
The UN Human Rights Committee wants to impose the universal legalization of abortion and euthanasia. It is sadly ironic that in order to do so, they must rewrite their International Covenant on Civil and Political Rights drafted in 1966 which states that "every human being has the inherent right to life. This right shall be protected by law. No one shall be arbitrarily deprived of his life." This would allow for the UN adoption of abortion and euthanasia as human rights.
PROTECTING THE ELDERLY: A BIBLICAL IMPERATIVE
Dr. Emanuel's views on old-age are disturbing, even more so when applied to the allocation of epidemiological health resources and end-of-life healthcare. In an interview last year on the subject, Rabbi Pinchas Winston, a prominent end-of-days author, noted a particularly disturbing aspect of euthanasia.
"It is unthinkable but many of these cases require a child giving permission to kill their parent," Rabbi Winston said. "Society seems to be moving in this direction as the connection between parent and child falls by the wayside. Abortion is a mother rejecting her child and euthanasia may be a child rejecting their parent."
Rabbi Winston pointed out that respecting a parent is one of the Ten Commandments and explicitly related to lengthening life.
Honor your father and your mother, that you may long endure on the land that Hashem your God is assigning to you. Exodus 20:12
"Suffering is an important part of life," Rabbi Winston said. "It may be difficult to accept but even suffering is from God. True humanity, true mercy and love, is long-term and may take years to work out. To cut that short is man's desire for comfort, not a desire to be humane. The Torah fights against that. If you take away man's divinity then all you are left with is a pursuit of comfort."
BIDEN ADMINISTRATION POLICY
Dr. Ezekiel is not an outlier in Biden's coronavirus task force. One of the chairmen is Dr. David Kessler, a former FDA commissioner. He is a leader in the hospice movement leader and an advocate for physician-assisted suicide.
It should also be noted that another task force appointee, Dr. Vivek Murthy who, when he served as the Surgeon General from 2014 until 2017, advocated for stricter laws enforcing vaccination of children. In an interview with CNN, he said he was "concerned" that vaccine exemptions for religious and other reasons "in some states is too permissive."
Originally published at Breaking Israel News - reposted with permission.