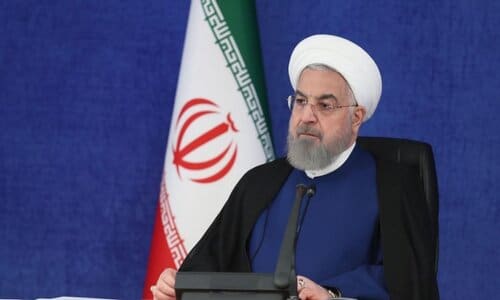 By David Suissa/JNS.org November 13, 2020
Share this article:
Well, that didn't take long. Whether Joe Biden becomes the next American president remains to be seen, Iran is already refusing to renegotiate the Joint Comprehensive Plan of Action (JCPOA), also known as the Iran nuclear deal, which U.S. President Donald Trump abandoned in 2018 in favor of tougher sanctions.
Trump's "maximum pressure" approach has severely hurt Iran, both economically and militarily. One would think, then, that Iran would jump at the chance to get back in the deal, especially since Biden has already expressed his desire to do so.
But there's a hitch: Biden has his own demands. As Tom O'Connor reports in Newsweek, "Biden has pledged to return, but only if Iran restored some of the commitments it has since walked away from due to other participants' failure to normalize trade ties with the Islamic Republic in the wake of the U.S. exit."

These commitments include "restricting uranium enrichment back down to 3.67 percent, halting production at the Fordow Fuel Enrichment Plant and [stopping the installation] of advanced centrifuges."
Quoting Biden's official foreign-policy page, O'Connor adds, "If Tehran returns to compliance with the deal, President Biden would re-enter the agreement, using hard-nosed diplomacy and support from our allies to strengthen and extend it, while more effectively pushing back against Iran's other destabilizing activities."
Now compare this "hard-nosed" warning to recent statements from Iranian officials, who not only refuse to renegotiate but, according to Newsweek, are "eager to pressure Washington to be held accountable for billions of dollars in lost revenue due to the unilateral U.S. sanctions imposed by the Trump administration after the U.S. departed the agreement."
Do you see a Battle Royale shaping up?
So do the Iranian mullahs, which is why they're racing to exploit the #1 weapon in the art of gaining leverage in negotiations: Saying no.

Perhaps they're hoping that a Biden administration will repeat the overeager routine of the Obama administration, which appeared desperate to notch a foreign-policy victory in former U.S. President Barack Obama's waning months. The blunder was not so much the eagerness itself, but showing that eagerness to a cunning adversary who took full advantage.
It's no coincidence that we ended up with a deal that freed up tens of billions in sanctions relief to the world's #1 sponsor of terror while permitting a "sunset clause" that would effectively allow Iran to build a nuclear weapon after a 10-15 year period. When you've been around for 5,000 years, what's another 10 or 15?
I suspect Iran anticipates Biden to be a little tougher than Obama. But by refusing to renegotiate and instead trying to recoup billions--money that will surely help support terror activities--they will severely test Biden's commitment to "hard-nosed" diplomacy and pushback against "Iran's other destabilizing activities."
If you just look at these two starting positions, the parties appear very far apart in any renegotiation of the JCPA. We can only hope that whatever hand a Biden team would decide to play, it won't be the overeager one.
Originally published at JNS.org - reposted with permission.