Lessons For Today From The Early Church Under Caesar 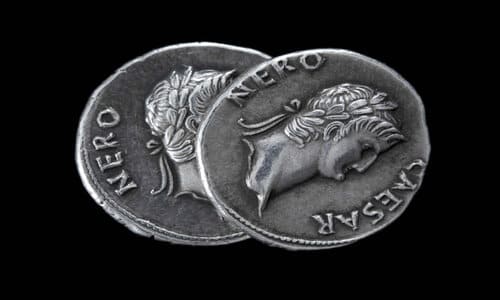 By Michael Brown/AskDrBrown.org November 13, 2020
Share this article:
We have been blessed with many liberties here in America, many of them unknown throughout human history. And we should diligently guard those liberties. It would be a terrible tragedy if we lost them, especially for the generations that will follow. Few things are as precious as our freedoms.
At the same time, as followers of Jesus, it's easy for us to lose our perspective because of those very liberties and freedoms. It's easy for us to become dependent on the government. Or to put our trust in a worldly system. Or to believe that human limitations can put limitations on God. Perish the thought.
Meet Nero and Caligula
With this in mind, we do well to think back to the situation of the first century church, living in the Roman Empire and subject to the Roman emperor, meaning men like Caligula (37-41 AD) and Nero (54-68).
According to one history website, "Caligula was Rome's most tyrannical emperor. His reign from 37-41 AD is filled with murder and debauchery, to levels even his infamous nephew Nero could not reach. The great-great grandson of Julius Caesar certainly left his mark by his possible madness and definitely horrific acts."

Another website states, "Historical accounts of Caligula may vary, but nearly all historians agreed on one dark fact: this deranged emperor placed very little value on human life. In one twisted story, Caligula was supposedly meant to sacrifice a bull to the gods by hitting it over the head with a huge mallet. At the last minute, Caligula had an even worse idea -- he turned and struck the priest instead."
This was the leader of the empire.
As for Nero, where do we start? According to the historian Tacitus, "to stop the rumor that he had set Rome on fire, he [Emperor Nero] falsely charged with guilt, and punished with the most fearful tortures, the persons commonly called Christians, who were generally hated for their enormities ... . Accordingly first those were arrested who confessed they were Christians; next on their information, a vast multitude were convicted, not so much on the charge of burning the city, as of 'hating the human race.'" (Yes, these early Christians were called "haters.")
Tacitus continues: "In their very deaths they were made the subjects of sport: for they were covered with the hides of wild beasts, and worried to death by dogs, or nailed to crosses, or set fire to, and when the day waned, burned to serve for the evening lights."
Yet the Church Thrived
Picture this happening in your city to your friends and family members.
Yet it was during the reigns of Caligula and Nero, among others, that the early church thrived. It was during these times of intense, unspeakable cruelty and persecution, that the gospel message flourished and grew.
And it was while the demented, murderous Nero was emperor that Paul wrote these words: "Let every person be subject to the governing authorities. For there is no authority except from God, and those that exist have been instituted by God" (Romans 13:1).

Of course, Paul did not call for unqualified submission to governing authorities, as in cases where the authorities command you to do evil.
Accordingly, if you were a Christian living in Hitler's Germany and were commanded to turn in any Jews you knew, the right thing would be disobedience -- disobedience to man but obedience to God. We always submit to the highest authority.
Growth Under Persecution
But that's now what I want to focus on. Instead, I want to draw our attention to the attitude of believers under a dictatorial regime. You cannot vote. You cannot take legal action against the government. You cannot protest (unless you want to be killed in the process). You cannot change "the system." Such matters are out of your hands.
But you can do something much more powerful. You can spread the gospel. You can advance God's countercultural, spiritual kingdom. You can liberate people's hearts and minds. You can bring healing and redemption. You can be an agent of eternal change. You can challenge the system from the ground up.
And that's what these early believers did, turning their world upside down.
The ultimate battle is a spiritual battle, and that battle can be waged regardless of what kind of government we're under.

In fact, it is often during the hardest times that the church grows the most. Just look at the explosive growth of the Church in Communist China over the last 70-80 years. Or consider the church in Muslim Iran, which is growing as rapidly as any church in the world.
The church often does much better under persecution than under prosperity.
That's why it doesn't surprise me that the most precious, devoted Christians I have met in the world are Christians under persecution. Conversely, it doesn't surprise that, quite often, the most complacent Christians I've met have been Christians in the midst of abundant prosperity.
That's why the church became much more compromised and worldly once Constantine Christianized the Roman Empire. With the good came the bad. Governmental backing now produced a foreign mixture, as the Church became an appendage of a still-worldly empire.
Freedom and prosperity are gifts that can be easily abused.
It's true, of course, that at different times in history (including recently), radical Islam has virtually wiped out entire Christian populations in some parts of the world. And it's true that no one in their right mind would want to bequeath brutal persecution and mass killing on the generations to come.
Do Not Put Your Trust in the Arm of Flesh
To repeat: we must guard the freedoms and liberties God has given us here in America.
But let's also be realistic. Just as Donald Trump is not Jesus, Joe Biden is not the devil. Neither is he Nero.
Biden may support gay "marriage" and transgender activism, but Nero "castrated a boy named Sporus to make him womanlike, and then married him in a traditional ceremony, which included a bridal veil and a dowry, according to the Roman historian and biographer Suetonius (circa A.D. 69)."
And I do not believe for a moment that Biden would call for Christians to be set on fire and burned alive to illuminate the night. Please! (And for the record, we still do not officially know who our next president will be.)
So, while we work hard to preserve our freedoms and push back against those who seek to take them from us, we must never put our trust in the arm of flesh.
Paul's counsel was simple: "First of all, then, I urge that supplications, prayers, intercessions, and thanksgivings be made for all people, for kings and all who are in high positions, that we may lead a peaceful and quiet life, godly and dignified in every way. This is good, and it is pleasing in the sight of God our Savior, who desires all people to be saved and to come to the knowledge of the truth" (1 Timothy 2:1-4).
Here in America, we should get involved in the political system as much as we are called to and have the opportunity to do so.
But our trust is placed elsewhere. The invisible kingdom is advancing, and no power in heaven or on earth can stop it.
Peter and Paul and a host of other first century Christians, all killed for their faith, would add their hearty Amen.
Originally published at AskDrBrown.org - reposted with permission.