Progressives Have A Message For America: Unify Or Else! 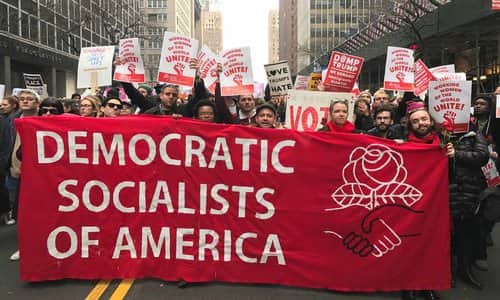 By Jonathon Van Maren/Bridgehead.ca November 18, 2020
Share this article:
Predictably, the time for America to unify is immediately after the Democrats feel assured that a Democrat will be in the White House on January 20, 2021. Also predictably, they have entirely forgotten about the past four years.
They are now claiming, as if none of us have had access to the media outlets that so faithfully stump for them, that they "accepted" Trump's presidency, and that thus it is downright unAmerican for suspicious conservatives to launch a #NotMyPresident social media campaign. Wait, that was them. Last time. Awkward. Moving on.
If Republicans hold onto the Senate after the two Georgia runoff races, then perhaps Mitch Mconnell will be able to prevent Joe Biden from going whole hog on the Equality Act, and court-packing, and the rest of the transformation he and Kamala Harris have planned.
But if they achieve the power they desire--and be assured, they will be pouring money into Georgia like desperate bidders--the backlash they want to unleash will be something to behold.

In case anyone thinks that is hyperbolic, let's look at some evidence for that assertion.
Joe Biden is considering California Attorney General Xavier Becerra for the AG position. Becerra is currently prosecuting undercover journalists David Daleiden and Sandra Merritt, who released an exposé that resulted in the closure of two California companies that dealt in aborted baby body parts.
If Becerra gets his way, these two journalists could end up behind bars for recording people without consent, falsifying documents, and--get this--eavesdropping. As SFLA's Kristan Hawkins put it in Twitter: "They will come after the pro-life movement one day. We must save the Senate."
Biden's running mate Kamala Harris was Becerra's predecessor, and when the Center for Medical Progress release their exposé of Planned Parenthood's sale of baby body parts, Harris sprang into action. While taking Planned Parenthood's donations for her Senate campaign, she ordered a raid on David Daleiden's home.
As Daleiden put it: "Kamala Harris, at the behest of her political patron -- Planned Parenthood -- targeted me for criminal punishment solely because of the content of the message that I was publishing and speaking at the time as you mentioned the undercover video series showing top-level Planned Parenthood officials callously negotiating the harvesting and sale of tiny aborted baby hearts and lungs and livers and brains."
Imagine, if you will, what abortion activists like that will do if they achieve the power they seek.

Don't think the Democrats are going to forgive and forget these last four years, either--or even the fact that the Blue Wave they predicted for 2020 washed up weakly on the DC beach. Michelle Obama tweeted that we need to "connect" on "what unites us"--but that it is important to "remember that tens of millions of people voted for the status quo, even when it meant supporting lies, hate, chaos, and division."
Which, I'm sure you'll agree, sounds like someone eager to work with the hateful, divisive, and chaotic liars that stole the Democratic birthright for four long years. As Alexandra DeSanctis of National Review put it: "Unify with us, you liars and haters!"
That's pretty tame compared to the rant sportscaster and unhinged leftist Keith Olbermann launched into on his YouTube channel shortly before the election.
Beating Trump, he bellowed, isn't even close to enough: "He, and his enablers, and his supporters, and his collaborators, and the Mike Lees and the William Barrs ... and the Mike Pences, and the Rudy Giulianis and the Kyle Rittenhouses and the Amy Coney Barretts must be prosecuted and convicted and removed from our society while we try to rebuild it and to rebuild the world Trump has destroyed by turning it over to a virus."
This is the same guy, by the way, who tweeted on November 5 that "It is necessary to remove, and arrest, the president of the United States. Tonight."
I'm not sure how tens of millions of people are going to be "removed from society" or how Amy Coney Barrett or William Barr or Mike Pence for that matter can get prosecuted and convicted--or even what Olbermann wants them prosecuted for. But you'll notice that fascism is a sneaky little bugger. It creeps up on those who claim to hate it, and suddenly pops out of their mouths while they're too worked up to notice.
For Olbermann, his hatred is evidence enough that these people are guilty of crimes. As Stalin's infamous enforcer Beria once noted: "Show me the man and I'll find you the crime."
The only reason Democratic triumphalism hasn't set in yet is because they have not yet gotten hold of the tools they need to finish the job. They need the Senate for that, and so the Eye of Sauron has swung to Georgia. But imagine, if you will, what happens when "unifiers" like this are in the driver's seat.

Touré is an African American Black Lives Matter activist seeking to build a better society, and this was his take on the election: "If you're a Trumper I hope the pain and anxiety you feel now is excruciating. You voted against America and for a cult leader who has no redeeming or admirable qualities. He's a cretin who cares nothing about this country and you don't either. You deserve all the pain and more."
To that end, the Trump Accountability Project was set up to pinpoint and purge anyone who worked with the Trump Administration. The founders now say that the project will remain inactive due to Biden's call for unity. Put me down as unconvinced.
CNN is already condemning anyone in the GOP who is awaiting the outcome of the Trump Campaign's lawsuits before joining them in congratulating Joe Biden, and Jake Tapper warned that those still holding out hope for a Trump win should consider how their social media behavior might look to future employers, whatever that means.
Cancel culture is alive and well, and progressives are simply biding their time in order to persuade Georgian voters that they aren't as extreme as Keith Olbermann makes them look.
For all the progressive accusations leveled at Trump voters, consider this observation by British commentator Douglas Murray, who spent the weeks prior to Election Day on a journalism tour across America. "Perhaps we can now drop the 'both sides' equivalence and admit why US cities boarded-up last week?" he noted. "Fears of looting and arson were only if Trump got re-elected.
A self-questioning left would reflect here: Are you happy about having become the side of implicit, expected violence?"
In short, the progressives have a message for America: Unify--or else
Originally published at The Bridgehead - reposted with permission.