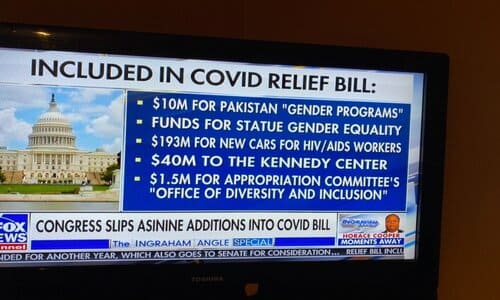 By PNW Staff December 23, 2020
Share this article:
The United States Congress just passed yet another 'Covid relief' bill. Billions of dollars will be given away to foreign countries as part of the bill, begging the question: is it even a "stimulus" bill at all?
Technically it includes general spending provisions for Fiscal Year 2021 (to avoid yet another government shut down).
But the biggest chunk of it is COVID relief, which comprises nearly $1 trillion of the spending. The total bill is more than FIVE THOUSAND PAGES, and it embodies the old political phrase, "Never let a crisis go to waste."
If the purpose of the bill really is to provide relief to Americans, then the bill should (in theory) be a few paragraphs at most.
What is being discovered is ... it's full of spending that has nothing to do with the well being of the American people.
This bill is literally 5,593 pages... and contains some of the most absurd provisions imaginable.

For starters, Americans will receive $600 in 'relief'.
So, you're not allowed to operate your business and earn a living for yourself. And in exchange, the government will will send you enough money to buy some new clothes so you can stay warm while you stand in line at the soup kitchen.
But it won't just be U.S. citizens that will be receiving free money.  According to Michelle Hackman of the Wall Street Journal, families of illegal immigrants will now be eligible as well...
Family members of unauthorized immigrants are now eligible to get stimulus checks under the $900 billion deal reached last night. That eligibility is retroactive, so adults excluded last time could get up to $1800 now
And of course there are the pet projects of politicians that come at the expense of so many programs for the common person such as another $40 million that will be allocated "for the necessary expenses for the operation, maintenance and security" of The Kennedy Center, which received $25 million in another COVID relief bill earlier this year. By the way, the Kennedy Center is currently closed.
Also $154 million for the National Gallery of Art.  Nearly $200 million so that federal HIV/AIDS workers overseas can buy cars and car insurance.  The bill creates a Women's History Museum and an American Latino Museum as part of the Smithsonian. Overall, the Smithsonian gets $1 billion. The bill also lays the groundwork for a "climate security advisory council".
And just how much more money can we waste: There's actually a commission tasked with educating "consumers about the dangers associated with using or storing portable fuel containers for flammable liquids near an open flame."
And for the bizarre - see the important "Statement Of Policy Regarding The Succession Or Reincarnation Of The Dalai Lama."  No joke. This is really in there.
It's the oldest trick in Washington: Take a bill that symbolically is overwhelmingly supported by the American people on its title alone (COVID relief for those struggling due to the pandemic). Then attach every pet project possible, in this case by combining it with an omnibus spending bill, and away we go.
Not surprisingly, the bill passed the House by a vote of 359 to 53.

I would like to applaud the 53 members of the House that tried to stand up and do the right thing, because this bill should have never been passed.
Here is a showcase of just some of the utter waste in this bill:
$10 million of taxpayer money (page 1,486) will be given to the government of Pakistan SPECIFICALLY for gender studies programs.
Page 1,461 of the bill, authorizes nearly $135 million for BURMA (aka Myanmar) "to promote ethnic and religious tolerance . . . in Kachin, Karen, Rakhine, and Shan states".
What bureaucrat could possibly come up with something so absurd? You get $600. But a bunch of corrupt generals in Burma get to rake in US taxpayer funds under the guise of ethnic and religious tolerance... but ONLY in FOUR out of Burma's 14 states.
(Tough luck if you're a Burmese warlord living in the state of Bago or Yangon... because obviously it would be ridiculous to give those states any money.)
Another $45 million of taxpayer money (page 1,491) will be awarded to key government officials in Central America- places like El Salvador, Honduras, and Guatemala- in order to "combat corruption".
You can't make this stuff up- they are giving money to corrupt politicians to fund anti-corruption programs. It's genius!
They're giving boatloads of money to plenty of foreign countries, including Ukraine ($453 million), Sudan ($700 million), the Republic of Georgia ($132 million), Bangladesh ($198 million), Vietnam ($170 million), and several others.
Then there's the small matter of $33 million for "democracy programs" in Venezuela. I'm sure Nicholas Maduro will use those funds well.
(The real irony is that, while allocated $33 million for Venezuela on page 1498, page 1347 of the bill expressly prohibits any funding for Venezuela. Unbelievable.)
1.3 billion will go to Egypt and the Egyptian Military which will go out and buy almost exclusively Russian Military equipment

Perhaps most noteworthy is that Members of Congress didn't receive the final bill yesterday until roughly two hours before the scheduled vote.
Now, Anne Jones, the six-time World Speed Reading Competition champion is able to read an average of 4,200 words per minute with 67% comprehension.
So it would take her more than nine hours to read this bill in its entirety, and she'd still lose about a third of it.
There's no way anyone in Congress was able to read this bill, or even thumb through enough of it to understand the big picture. And yet they still voted in favor of it, costing taxpayers another trillion dollars.
And that led a very angry Alexandria Ocasio-Cortez to take to Twitter and lament,
"This is why Congress needs time to actually read this package before voting on it. Members of Congress have not read this bill. It's over 5000 pages, arrived at 2pm today, and we are told to expect a vote on it in 2 hours. This isn't governance. It's hostage-taking."
For once I actually agree with AOC. This is an absurd process that exemplifies everything wrong with government: it's wasteful, ignorant, out of touch, oblivious, embarrassing, shameful, and corrupt.  Ironically, AOC went on to vote in favor of the bill.
It is going to take weeks before we learn all of the insidious things that were snuck into this bill, because that is how long it is going to take for ordinary citizens to read it.
As an aside, Joe Biden praised the process by which the bill was passed, saying "I applaud the bipartisan Congressional economic relief package" and called it "a model for the challenging work ahead."
Something tells me he didn't read the bill either.
President Donald Trump has already slammed the bill that Congress expects him to sign, saying that they need to send him a bill that gives Americans significantly more money.
"Despite all of this wasteful spending and much more, the $900 billion package provides hard-working taxpayers with only $600 each in relief payments and not enough money is given to small businesses and in particular restaurants, whose owners have suffered so grievously," Trump said. "Congress found plenty of money for foreign countries, lobbyists, and special interests while sending the bare minimum to the American people who need it. It wasn't their fault, it was China's fault, not their fault."
"I'm asking Congress to amend this bill and increase the ridiculously low $600 to $2,000 or $4,000 for a couple," Trump continued. "I'm also asking Congress to immediately get rid of the wasteful and unnecessary items from this legislation and to send me a suitable bill or else the next administration will have to deliver a COVID relief package."
Sadly this is unlikely to happen as the bill passed both houses of Congress with veto-proof majorities but perhaps the American people will finally see laid bare the politics of corruption on both sides of the isle.