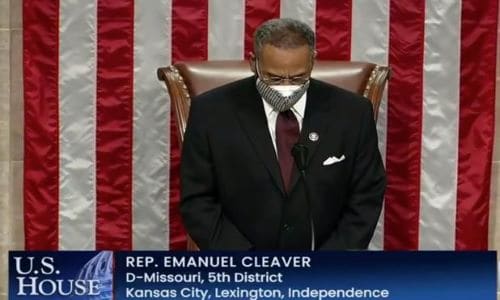 By Michael Brown/AskDrBrown.org January 05, 2021
Share this article:
In case you haven't heard, House Democrats want to remove all gendered language from their legislation, while the prayer to open the 117th Congress ended with, "Amen and A-woman." I kid you not. Who would make up something so insane?
A PC Prayer
Let's start with the PC prayer, which has to be seen to be believed. Rep. Emanuel Cleaver (D-MO), who is an ordained United Methodist minister ironically, opened the session by praying in the name of a Hindu god and twisting the word "amen" into a promotion of gender equality.
Though his prayer was full of explicitly Christian themes, terminology, and references, Cleaver closed it by appealing to the deities of "many different faiths," implying they are all the same.
"We ask it in the name of the monotheistic God, Brahma, and 'god' known by many names by many different faiths," said Cleaver.

And it concludes with, "Amen and A-woman," as if the "men" of "Amen" was somehow a gendered term. How patriarchal and bigoted to use the "men" word in prayer!
Of course, "Amen" comes from the common Semitic root '-m-n, with the word itself meaning, "So be it." And it is used in Jewish, Christian, and Islamic liturgy, being found in Hebrew, Greek, Latin, and Arabic (along with English and many other languages).
But who said being PC had anything to do with truth or reality? To the contrary, it is quite often based on the denial of reality, or, in this case, complete ignorance of a common word.
Learning New Phrases?
Following the logic of this prayer, we would have to learn new phrases like, "making awomends," since "making amends" contains the dreaded m- word. Or, we would have to learn to be "awomenable," lest we allow a male-dominated word like "amenable" to remain on the books. (Go ahead and make up your own list of words containing "men." This is madness.)
Not to be outdone, though, House Democrats have revealed their new, "future-focused" rules, which include the following: "In clause 8(c)(3) of rule XXIII, gendered terms, such as 'father, mother, son, daughter, brother, sister, uncle, aunt, first cousin, nephew, niece, husband, wife, father-in-law, mother-in-law, son-in-law, daughter-in-law, brother-in-law, sister-in-law, stepfather, stepmother, stepson, stepdaughter, stepbrother, stepsister, half-brother, half-sister, grandson, or granddaughter' will be removed.

"In their place, terms such as 'parent, child, sibling, parent's sibling, first cousin, sibling's child, spouse, parent-in-law, child-in-law, sibling-in-law, stepparent, stepchild, stepsibling, half-sibling, or grandchild' will be used, instead."
Inclusivity Gone Amuck
So, this is what the future looks like? This is what it means to be inclusive?
A particular highlight of the new rules is this: "The Office of the Whistleblower Ombudsman, for instance, is renamed in the rules to the 'Office of the Whistleblower Ombuds.'"
How can you not love this? How creative! How futuristic! How absurd!
The best response was that of the House Minority Leader Kevin McCarthy who tweeted, "This is stupid.
"Signed,
"A father, son, and brother."
Well said. Stupid it is.
A 'Bolder Agenda'
For others, however, these were bold and commendable reforms. As expressed by Rep. Ilhan Omar (with reference to the entire rules package, in particular, with regard to Medicare), "End of Nov, the Progressive Caucus decided on a set of progressive rules reform priorities: Paygo reform and MTR reform ranked high on that list.
So grateful to Chairman @RepMcGovern for helping us secure these reforms and setting the stage for us to push for bolder agenda."
But as easy as it is to poke fun at this ridiculous proposal, it is highly significant when one of our major government institutions wants to remove all gendered language. As the saying goes, this does not end well.
Where Culture is Headed
Looking to Canada as a case in point, the Religious Tolerance website reported that, "The Ontario Court of Appeals issued a decision on 2003-JUN-10 requiring the province of Ontario to provide marriage licenses to, and to register the marriages of, same-sex couples.

However, 73 pieces of existing legislation in the province violated this court ruling by referring to wife, husband, widow, widower, and similar sex-related terms. In order to bring the legislation in synchronism with the court decision which legalized SSM [same-sex marriage], each of these laws had to be amended to include gender-neutral language."
You might say, "So, what's the big deal. This is just technical, legal language. It hardly affects the person on the street."
Not so. This reflects both a mindset and a legal logic, and these things reflect where a culture is headed.
Consequently, over time, these things do trickle down, especially in the wake of the wave of transgender activism, where the war on gender-specific language becomes more pitched.
Compelled Speech
That's why, in 2016, Canada passed Bill C-16, which critics claim was all about compelled speech, specifically with regard to charges of hate speech for failure to comply with transgender preferences.
The most famous critic was Prof. Jordan Peterson who rose to international fame when he said in an October 2016 interview, "If they fine me, I won't pay it. If they put me in jail, I'll go on a hunger strike. I'm not doing this. I'm not using the words that other people require me to use. Especially if they're made up by radical left-wing ideologues."
Having studied the methods of totalitarian regimes for many years, Peterson drew the line when it came to compelled speech. He knew all that it implied.
Hate Speech and Gender Madness
As to where this kind of legislation can go, in 2019, I spoke face to face with a Canadian man involved in a legal dispute over his daughter's desire to transition to male. Not only did the court rule that he could not interfere with her getting hormone treatments, but he was forbidden to call his own daughter by her given, female name or to use female pronouns with reference to her, even in private, under penalty of immediate arrest.
And we have recently documented the new "hate speech" laws in Norway.
So, as laughable as the "A-woman" prayer might be, and as absurd as the House's "gender-inclusive" rules might be, we should take both with complete seriousness and say, "Not on my watch."
We can be compassionate to people in their struggles without engaging in gender madness.
Originally published at AskDrBrown.org - reposted with permission.