Big Tech Censors Are Coming For The Pro-Lifers Next 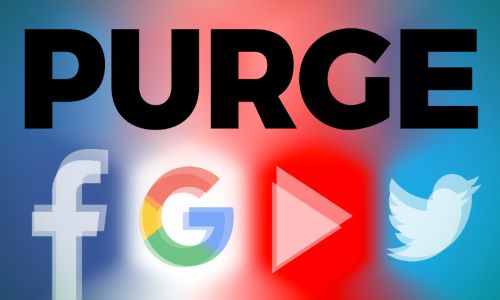 By Jonathon Van Maren/Bridgehead.ca January 18, 2021
Share this article:
Big Tech is coming for pro-lifers, and it will not be long before we face a choice: either we can self-censor and modify our views, steering carefully between progressive pylons, or we can end up kicked off platforms accessible only to those with the correct perspectives.
Progressives now have both power and pretext, and I have no doubt that they'll use them both in spades.
This has been a long time coming. Twitter's code of conduct already demands that users refrain from "deadnaming," misgendering, or using the wrong pronouns--and Twitter is more than happy to permanently ban those who refuse to play along with gender ideology.
If you call Caitlyn Bruce, you're gone. Theoretically, you could be kicked off simply for stating a fact about Bruce before he was Caitlyn. It might not make sense, but them's the rules.

Pro-life activists, perhaps because the anti-abortion cause has fared better than that of traditional marriage, have suffered less (although some) censorship on digital platforms when posting about abortion. I suspect that is about to change.
Big Tech will be both eager to please progressive politicians in order to avoid government regulation as well as happy to have an excuse to get rid of those with unpopular views.
With the president of the United States banned from social media for "incitement"--a standard that does not apply, for example, to Iran's ayatollahs--this standard will most likely be applied, haphazardly, to pro-lifers articulating difficult and painful truths about the nature of abortion.
Abortion is an act of violence that results in the death of a pre-born child. There have also been, over the decades, a handful of fringe extremists who have perpetrated violence against abortionists.
It is thus simple, in this era of heightened paranoia and progressive opportunity, for the abortion industry to claim that simply telling the truth about their work constitutes "incitement" or "violence."

Abortion activists like Joyce Arthur of the Abortion Rights Coalition of Canada have been doing this for years (ignoring the reality that in Canada, violence is perpetrated almost exclusively against pro-lifers.) So have plenty of abortion workers in the United States.
But with Big Tech looking to crack down, abortion activists sense an opportunity to silence those who tell the truth about the violence they perpetrate daily against the most defenseless humans in our society.
Case in point is the response of abortionist Leah Torres to a tweet made by Live Action founder Lila Rose, who noted on January 7 that "Abortion is violence." Torres responded with a tweet clearly meant to bait the Big Tech censors into coming for Rose: "This is violent rhetoric. It is objectively false and meant to incite others to commit crimes against clinics, patients, and health care providers. This is what domestic terrorism looks like."
Torres, incidentally, made comments that went viral several years ago, describing the violence inherent to abortion. "You know fetuses can't scream, right?" she wrote. "I transect the cord [first] so there's really no opportunity, if they're even far enough along to have a larynx."

She later deleted the comment. Abortion is violence by definition. But Torres and her comrades in the abortion industry are hoping that by labeling the truth about abortion "violence" and "domestic terrorism," they can persuade social media platforms to de-platform pro-life leaders like Rose for "incitement."
I hope this won't happen, but we appear to be facing a perfect storm. Big Tech has set a new standard for de-platforming, and progressives who have long seethed about having to share the digital public square with those they hate sense their opportunity.
Over the coming months, we'll see them accuse pro-life and pro-family leaders of violence. We'll see them trot out fringe figures in order to discredit an entire movement of millions.
We'll see them call on Big Tech to exile pro-lifers and pro-family activists from privately-owned platforms where most cultural discussions now unfold. And in all likelihood, we'll see Big Tech buckle, and pro-lifers banished.
Originally published at The Bridgehead - reposted with permission.