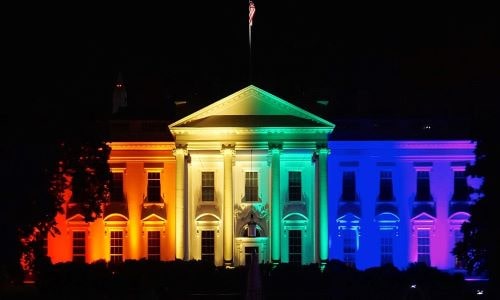 By Jonathon Van Maren/Bridgehead.ca February 11, 2021
Share this article:
Biden’s executive orders are going to have far-reaching consequences, and the progressives are back in the driver’s seat and in control of the internationalist swamp.
The United States, under Democratic presidents, is not so much a “beacon of freedom and democracy” as it is a neo-colonial power, pushing the radical LGBT agenda and abortion on nations it considers less evolved.
Obama was famously told to take his views and shove off by various African leaders, and now Biden, despite his advanced age, is primed to push even further. From Austin Ruse at C-Fam:

This week, President Biden signed an executive order that will promote homosexuality and transgenderism as a centerpiece of U.S. foreign policy. The document directs “all U.S. government departments and agencies engaged abroad to ensure that U.S. diplomacy and foreign assistance promote and protect the human rights of lesbian, gay, bisexual, transgender, queer, and intersex persons around the world.”
Of most concern to human rights advocates around the world is the provision of $10 million in the upcoming fiscal year to fund the “Global Equality Fund” that will allow the U.S. government to blacklist foreign religious leaders who speak out in favor of the natural family and against the LGBT ascendancy.
These human rights advocates could be blocked in the same way certain Russian oligarchs are blocked from entering the United States.
This new Executive Order is part of President Biden’s payback to homosexual elites for their support of his candidacy. In December, thirty wealthy left-wing groups, calling themselves the Council for Global Equality, issued a list of demands, including passage of the Equality Act that would force Christian homeless shelters to place men with women.

The group demanded that Biden strike down Mexico City Policy that forbids U.S. money from going to abortion-friendly groups overseas, which he did in the opening days of his presidency. The group also calls for a global effort to combat what they call “anti-gender” groups around the world.
This presumably would include American groups that work overseas, including C-Fam (publisher of the Friday Fax), Alliance Defending Freedom, Concerned Women for America, the Heritage Foundation, and other mainstream conservative and pro-life groups.
The proposed blacklist could affect people like Anne Kioko of Kenya, who has led the fight there in favor of the natural family. It could also affect Ignacio Arsuaga, founder and president of CitizenGo, a grassroots petition organization with millions of followers. Kioko and Arsuaga have worked closely with U.S. groups at the United Nations.
Human rights advocates are additionally concerned that pushing the LGBT agenda in U.S. foreign policy will come at the expense of Christians.
President Obama, for instance, changed the State Department Office on Religious Freedom to include homosexual issues. Christians were pushed out of the office, and the annual religious persecution report came to include attacks on Christians and Jews who defend the natural family.

It should be understood that sexual orientation and gender identity are not recognized categories of nondiscrimination in international law. The phrase does not appear in any hard-law treaties.
It appears in a few nonbinding documents, specifically documents from the UN in Geneva calling for research into violence against homosexuals. Senior UN bureaucrats and treaty monitoring bodies have said SOGI is a category of nondiscrimination, but their comments are not binding or normative.
The question becomes, will there be a blacklist of Christian, Jewish, and Muslim leaders who will be blocked from entering the United States? Will Biden push for foreign governments to allow boys into female sports? How far will President Biden go to thank the homosexual elite for their money and votes during the last campaign?
We’ll all find out together.
Originally published at The Bridgehead - reposted with permission.