We Knew This Was Coming: Pastor Fined For Speaking Out Against Homosexuality 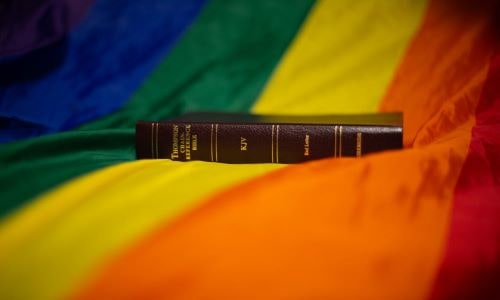 By Jonathon Van Maren/Bridgehead.ca February 15, 2021
Share this article:
In a stunning sentence late last year, a court in Bremen, Germany, sentenced Rev. Olaf Latzel of St. Martini (part of the Evangelical Church in Germany: EKD) to a fine of €8,100 for "inciting hatred" against homosexuals in private remarks made to church couples.
During the seminar, Latzel defended the biblical definitions of gender and sexuality, condemning the Berlin Pride March and referring to gender ideology as "an attack against God's order of Creation."
Latzel's defense lawyer called the sentence, which the pastor is appealing, a "catastrophe," and warned that free speech was under threat: "While today this is about a view found in the Bible, tomorrow it will be about any other opinion."
Latzel's lawyer told the court that the Bremen pastor was condemning behavior rather than people, but the judge stated that the "homosexual orientation of a person is a part of his personality."
Some Protestant leaders in Bremen appear to be more concerned by how biblical teachings reflect on their popularity, rather than by threats to their ability to proclaim the Gospel, announcing in response to the sentence that they "condemned in the strongest terms" Latzel's words.

The EKD is a largely liberal denomination, and Latzel's traditional views have made him a controversial figure for some time. St. Martini church, where Latzel serves as pastor, has even had services interrupted by LGBT activists.
To discuss the implications of this ongoing case, I reached out to Manfred Müller with the German office of Voice of the Martyrs.
Müller told me that Latzel was prosecuted in a "political show trial" in "a huge public space rented in order for many people to attend the public spectacle." His case, Müller said, needs international attention.
What is the significance of this case? Is there a precedent for it?
There is no precedent for it. It's the other way around: This will serve as a precedent for future cases. That makes it so significant. We have seen this coming for a long time. Even a few years ago some conservative Christian might have already said: If I were to imagine persecution coming to Germany, I might imagine it along the lines of moral -- especially sexual -- ethics.
Now, with Olaf Latzel, for the first time a German court restricts religious freedom (Article 4, Basic Law) for the benefit of the homosexual lobby. Or to put it in more neutral terms: to protect the feelings and rights of homosexuals.

At the expense of freedom of speech, religious freedom etc., homosexual rights are protected. This will have consequences (if the judgment will hold against the appeal) for churches in Germany that reject gay blessings and weddings. This could, for example, in the future cause them to lose their status [as charitable organizations]. That would [be] a huge financial disadvantage.
What is the potential outcome for other conservative clergy members?
Already: intimidation to take a biblical stand on this issue. In addition, new realities will be created in the regional church, meaning that in the future pastors with a critical attitude towards blessing homosexual couples or even conducting weddings will not be admitted to the church as clergy.
Before being employed, an interview could be held asking them about their stance on those issues. Thus, facts are created and pastors with a biblical view of homosexuality will then no longer exist.
How was Latzel's trial a "show trial" -- a very loaded word in the German context?
By relocating the trial to the public arena (a local theater) instead of the courtroom, thus allowing for more people to attend. Plus, the rush to judgment in the media and the prejudice by all the involved parties. All that created prejudgment and pressure on the judge to make the "right" decision.
How was the trial unfair?
The whole accusation does not hold. There was never the intention to publish what Olaf Latzel shared in this internal Bible study group for couples. It was a closed event. No way that this could or even should have served to spark public hate, let alone "incitement of the masses" (the accusation).

So to begin with, the seminar was not public. It should never be on the internet (actually the recording of the event records Pastor Latzel himself saying this at the beginning: This is not to be published.) In the talk Pastor Latzel always speaks of "homosexuality," not of "homosexuals," differentiating between sin and sinner. This differentiation has not been taken into account by the court, which would have been absolutely necessary for the verdict.
Can anything be done to redress the situation?
Jesus is Lord. HE can change anything and everything. Speak but one word. He only has to speak one word. That is why prayer is so important. If folks could just pray for our Brother Latzel.
Also, pressure. International pressure. It might be helpful to write letters to the church.
How does this bode ill for the future?
The position for those who are faithful to the Bible and for conservative congregations will change and has already become more difficult. We should not forget that the church Pastor Latzel is serving, the St. Martini church in Bremen, is also being harassed.
In Germany, the Pietists were seen as crown jewels of society (in Württemberg). But today they are no longer considered socially acceptable.
Originally published at The Bridgehead - reposted with permission.