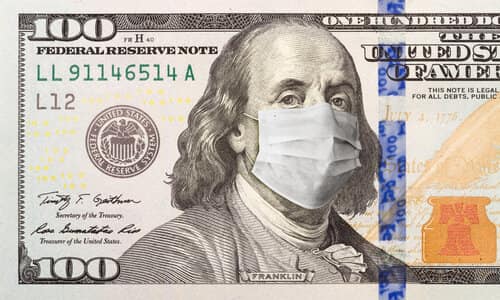 By Brad Polumbo/Activist Post February 19, 2021
Share this article:
President Biden has not backed down from his $1.9 trillion COVID-19 spending proposal, and House Democrats are pushing full steam ahead on making his vision a legislative reality.
But a top budget watchdog just warned that the budget-busting legislation, which costs roughly $13,260 per federal taxpayer, is full of spending that has nothing to do with the pandemic.
"Only about 1 percent of the entire package goes toward COVID vaccines, and 5 percent is truly focused on public health needs surrounding the pandemic," the Committee for a Responsible Federal Budget (CRFB) warned on Wednesday.

"Meanwhile, nearly half of the package will be spent on poorly targeted rebate checks and state and local government aid, including to households and governments that have experienced little or no financial loss during this crisis," the report continues.
Even some of the money that is ostensibly related to COVID-19, like billions intended to help schools reopen, is highly misleading. For example, as CRFB senior policy director Marc Goldwein notes, much of this money for "school reopening" is actually allocated for 2023 and 2024, long past when all schools will have reopened.
More broadly, the committee reports that at least $300 billion of the bill's spending, 15 percent, is allocated toward long-standing policy priorities that have no direct relation to the COVID-19 pandemic.
"The bill includes a number of other long-standing priorities, such as expanding the child tax credit and earned income tax credit, increasing Affordable Care Act subsidies, and boosting the minimum wage," CRFB president Maya MacGuineas says. "These policies don't belong in a COVID relief package, and should be fully offset if retained."

That Congress would co-opt the COVID-19 crisis to push partisan priorities and hand out wasteful slush-funds will understandably appall many Americans. But it shouldn't really come as a surprise. Washington's propensity for waste, cronyism, and profligacy is no secret at this point.
Senator Rand Paul's annual "Waste Report" documents examples of profligate government waste every year. Of the countless billions in total waste documented by the senator's office, memorable examples include subsidizing frog mating, taxpayer support for the Pakistani film industry, studying nicotine-addicted fish, funding for Sri Lankan think tanks, and taxpayer money spent to combat truancy... in the Philippines.
Waste is a feature, not a bug, of how Congress routinely handles our money. And it's also, sadly, par for the course that legislators slip unrelated provisions into bills seen as "must-pass" to quietly force through changes they know would never become law as stand-alone legislation.
For example, Congress passed a massive "omnibus" spending bill paired with COVID-19 relief legislation in December. The legislation was 5,500+ pages long and given to most members of Congress hours before the vote was scheduled. It was full of bizarre expenditures--like more than $40 million for the Kennedy Center and seemingly random foreign aid funding.

In reality, none of it is random. The money for "school reopening" long after schools are reopened is really a generic handout for teachers' unions--which donate heavily to many members of Congress--masquerading as emergency COVID relief.
Similarly, each odd pet project or earmark can usually be tracked to a particular interest group or individual with sway over a given politician. This is, unfortunately, simply the status quo of how the federal government operates.
So, it's utterly unsurprising that policymakers are taking this same pork-filled approach with the latest legislation. But the Committee for a Responsible Federal Budget's warning suggests it could be even worse this time than in past bills.
We already knew that Biden's budget-busting COVID-19 "stimulus" proposal wasn't actually going to stimulate the economy and itself contains job-killing provisions. Now we know that much of it isn't even related to COVID-19 at all.
Originally published at Activist Post - reposted with permission.