Will Obama Be The Next UN General-Secretary? 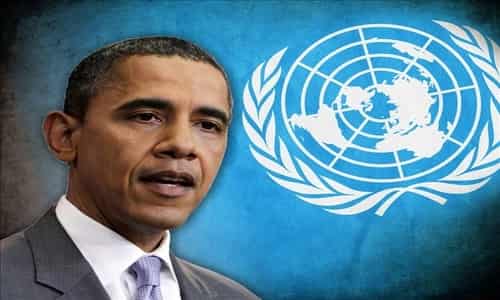 By Kade Hawkins January 10, 2016
Share this article:
Is it possible we could see Hillary Clinton as the 45th President of the United States while former President Barack Obama sits as the acting Secretary General of the United Nations?
This nightmare scenario for conservatives is beginning to gain some traction as rumors are emerging that Israel is taking preventive action to make sure this never happens.
Current UN Secretary-General, Ban Ki-moon's term is scheduled to end December 31, 2016, coincidentally, 21 days before President Obama's term in office is also to end.
According to the Kuwaiti newspaper Al-Jarida, "informed sources" tell them Obama has already floated the idea of running for Secretary-General with some Democrats, Republicans, and Jewish officials in the US, although none has gone on record of discussing such a possibility.
Al-Jarida claimed this information set off alarm bells in Tel Aviv, where government officials view Obama as being responsible for allowing Iran to achieve a path to nuclear weapons.
The sources claimed that once Netanyahu got wind of Obamas plans, the prime minister began to make efforts to torpedo what he has referred to as "the Obama project."
"Wasnt eight years of having Obama in office enough? Netanyahu is quoted as telling associates. "Eight years during which he ignored Israel? And now he wants to be in a position that is liable to cause us hardships in the international arena."
Tensions between Obama and Netanyahu have been no secret over the years as the US has moved farther away from supporting Israel's positions on a multitude of issues. That being said, some analysts doubt that a newspaper in Kuwait, a country who had no direct ties with Israel, would be privy to such inside information from Israeli sources.
However, a recent editorial in Canada's National Post has suggested that many of Obama's policies towards Islam have been made with this larger agenda in mind. Barbara Kay and Robert Cutler make some startling suggestions in their piece,
"Obama will still be a young man when he leaves the presidency. His multiple policy failures (which are failures by his own self-imposed yardsticks: Russia, Iran, Israel-Palestine, Syria) will not have diminished the capacious ego that he brought, and which brought him, to the White House.
"What post-presidency career would Obama consider worthy of his future attention and efforts? Few jobs of Olympian prestige are available, and his self-admittedly vast self-esteem might diminish the list still further. Ambassador to Kenya? We think not. No, we agree with a number of other observers that Obama has his sights set on the office of United Nations Secretary-General".
"If there is a litmus test for becoming UN Secretary-General, then that is winning the approval of the 57 members of the Organization of Islamic Cooperation (nearly 30 per cent of all UN members). For seven years, Obama appears to have bent over backwards to avoid hard truths that may offend them."
Secretaries General serve for five-year terms that can be renewed indefinitely, although none so far has held office for more than two terms. If Obama runs and does win the office, anti-Obama advocates will have much to talk about for potentially decades to come.
If Obama is truly interested in becoming Secretary-General whatever his ultimate motivations may be, he will have a limited timeframe to start making those intentions known.
U.N. officials say they hope a list of candidates will be completed by March and that the Security Council will begin its selection process in July.
This also marks the first year the world body's 193 members were directly encouraged to consider putting forward a woman for the top position.
The 15-member Security Council, including veto powers China, Russia, the United States, Britain and France, traditionally considers an undisclosed list behind closed doors and recommends a candidate to be elected by the General Assembly.
The United Nations is attempting to be more transparent with its selection process and is announcing candidates that have been put forward for selection.
Thus far only two candidates have been put forward, former U.N. General Assembly President Srgjan Kerim of Macedonia and Croatian Foreign Minister Vesna Pusic.
Such an open campaign for Obama to be put forward for this position could play to his advantage as he is still very popular in many countries around the world. However, issues of fairness and tradition will come into play as the job customarily rotates between regions, with Eastern Europe next on the list.
No former leader of a major power or permanent member of the Security Council, which includes the US, has ever been elected to the post of UN Secretary General. Although not a direct policy, it has been this way for 70 years to keep any one country from having too much global influence.
The odds would seem to be stacked against Obama being able to secure such a position, but in a world of rapidly changing traditions and alliances, anything is possible.