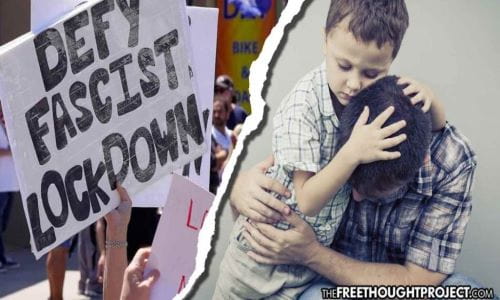 By Matt Agorist/Activist Post March 11, 2021
Share this article:
A terrifying ruling has been made in a child custody case which used the father's beliefs over the COVID-19 pandemic to remove his children from his custody.
The father used to have his children from Friday to Sunday in split custody. However, the court ruled the father's beliefs about the pandemic are a danger to his children and he will now only be able to see them at a supervised government access center where he is required to abide by all the conditions imposed by the facility "as a precondition to access."
Ontario Superior Court Justice George W. King said the man's anti-masking beliefs, along with his participation in anti-lockdown protests were cause to remove the children from his custody.

"The health and welfare of the children (and by extension their principal caregiver) should not be jeopardized because of his public behavior in promotion of his opinions," he wrote, according to CBC. The outlet did not name the father involved in the case to protect the identity of the children.
In some Orwellian act of doublethink, the court ruled that the father is free to have whatever beliefs he wishes and to lawfully express them, but just not as a father.
"I have concluded that the respondent's behavior is dictated by his world view. Everything else is subordinate to that view, including, but not limited to, his love for his children," the decision by Justice King read.
Even human rights attorneys are agreeing with the court. According to CBC, Yavar Hameed, an Ottawa-based human rights lawyer, said that people do have the right to express themselves but that expression is limited at the point where harm can come to another person.

"So it's not just a matter of freedom of conscience, freedom of expression protected by the charter of rights and freedoms, it's expressions that simply might relate because of the underlying actions on the safety of another person," he said.
"The long-term effects of the pandemic and of delayed treatments to persons with other health conditions is currently unmeasurable," justice King wrote.
This ruling sets a rather ominous precedent over parents' beliefs and the court deciding whether or not they are allowed custody of their children.
In the future this precedent could be used to deem other beliefs held by parents as a reason to take their children away. "Disagree with the government? We can now take your kids to keep them safe."  See how that works.
We have already seen how some foster parents who opposed the gender transition of the children in their care have have lost custody.  And of course that's if you already have kids.  What if you wanted to adopt?

You will be denied the right to adopt in the first place at many agencies if they find out you are a Bible believing Christian who believes marriage should only be between a man and a woman or that biological sex actually determines if you are male or female.
Should parents need to fear losing custody of their children for holding to beliefs that can now be considered "hateful" and in turn "harmful" to children.  Just ask the father in Toronto who is now under police investigation for a "hate crime" for opposing the flying of the rainbow flag at his children's Christian school.
Parental rights are going to come under attack like we have never seen before and the recent Covid ruling may have just opened the doors wide open.
Originally published at Activist Post - reposted with permission.