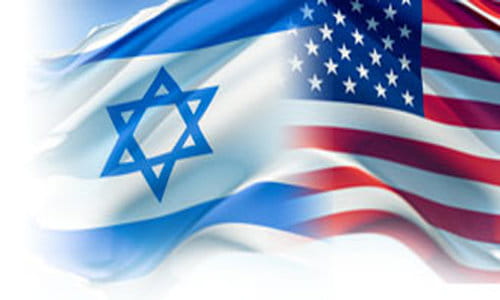 By Lamb/Lion Ministries March 24, 2021
Share this article:
Americans continue to favor Israel over the Palestinians, yet their support for the Palestinian Authority has increased to 30 percent, according to a Gallup annual World Affairs poll published on Friday.
Favorability of Israel remains high, at 75 percent, the poll revealed.
The poll also indicated that since 2018, the percentage of Americans wanting more pressure placed on the Palestinians to resolve their conflict with Israel has dropped from 50 percent to 44 percent, while that of Americans wanting more pressure exerted on Israel has increased from 27 percent to 34 percent.
Gallup says that this is the highest level of demand for pressuring Israel since 2007. Over the same period, the percentage in favor of the United States putting more pressure on both parties, or on neither, has declined from 21 percent to 14 percent.
The majority of those favoring pressure on Israel are Democrats at 53 percent, while 17 percent of Republicans and 31 percent of independents favor doing so.

Should Christians Really Support Israel?
God is fulfilling promises today that were made to the Jewish people thousands of years ago. These promises rest on a series of legal agreements, called covenants, made between God and the Jewish people, that center on the land of Israel.
The cornerstone covenant -- the Abrahamic Covenant -- grants the title deed to the land of Israel to the descendants of the line of Abraham, Isaac, and Jacob. This unconditional, irrevocable, and everlasting promise was literally sealed in blood (Genesis 12:1-7; 13:14-18; 17:7; 1 Chronicles 16:17-18; Psalm 105:8-11; Romans 9:4)!
God's Land Covenant promised that Israel will one day become the prime nation of the world, that is, as long as the Jewish people remain obedient to God (Deuteronomy 28:1,13).
The Davidic Covenant promises an eternal King who will descend from the line of King David. One day this Messiah will rule over the entire world from Jerusalem (2 Samuel 7:10-16).
For hundreds of years, Christians have believed that because God said so, we should naturally support the nation of Israel. Seems pretty self-explanatory, wouldn't you say?
Well, not so, says a particular group of Christians, Christians who meet at conferences with names like Christ at the Checkpoint. They question, "Should Christians really support Israel?"
Let's debunk seven of their most popular myths for why Christians should not support the nation of Israel.

Myth #1: "The Jews killed Jesus!"
Those who accuse the Jews of killing Jesus seem to have purposefully forgotten that the Bible says, "Indeed Herod and Pontius Pilate met together with the Gentiles and the people of Israel in this city to conspire against your holy servant Jesus" (Acts 4:27-28).
So, not only did both Jews and Gentiles participate in murdering Jesus, but in truth, we are all sinners, and therefore all of us are responsible for Jesus dying on the cross. But, reality check, Jesus Himself clearly stated that He alone laid down His life, and that no one took it from Him (John 10:15-18).
Myth #2: "The Jews have been disinherited because of their unbelief."
The Jews may have been evicted from their land -- twice -- due to their rebellion against God. But, as Psalm 105 explains, God guaranteed in His Abrahamic Covenant that the land of Israel unconditionally and forever belongs to the children of Jacob. And, as the Apostle Paul argued in Romans 9-11, "Did God reject his people? By no means! I am an Israelite myself... Did they stumble so as to fall beyond recovery? Not at all!"
And so, no, God has neither disinherited the Jewish people nor revoked His land covenants.
Myth #3: "The Church has replaced Israel and now receives her inheritance."
Not according to the Apostle Paul! He tells the story of an olive tree whose branches were pruned off due to unbelief, and wild vines grafted on (Romans 11). But, when the natural branches began believing again, they would be grafted back on the tree. Salvation may have come to the wild olive vines -- the Church -- but God still has salvation planned for the natural branches -- a believing Israel who will call Jesus Savior.
Myth #4: "The Jews regathering back to the land of Israel can't be from God because they haven't repented and accepted Jesus as their Messiah."
The Jews returning to Israel in unbelief is exactly what God foretold would happen. Isaiah prophesied the Jews would be regathered a second time from the nations of the world, and Ezekiel made it clear that the Jews would regather in unbelief in order for God Himself to give them a new heart towards Him (Isaiah 11:10-12; Ezekiel 36:22-28).

It's no accident of history that a people dispossessed from their country for 1,900 years could ever have kept their ethnic identity and rebirthed their nation two millennia later. Such a thing has never happened! And this is the nation of the Bible we're talking about. Therefore, the regathering of the Jews can only be a miracle from God.
Myth #5: "To support Israel is to support every action of the Israeli government."
Nobody supports every action of any government, even their own. Supporting Israel is to support the redemptive work God is doing in bringing a remnant of their people to salvation in Christ and ultimately into the fulfilment of His covenants.
Myth #6: "The Jews stole the Palestinians' land and live there illegally."
First off, the Abrahamic Covenant grants the Jews the eternal deed to the land of Israel. Second, when the Jews began returning in the early 20th Century, there was no such thing as a Palestinian. The handful of Arabs living in that wasteland sold the land back to the Jews at exorbitant prices.
And third, Israel was created legally in response to a United Nations declaration passed in November 1947, which authorized the establishment of a Jewish state in the land the Romans had renamed Palestine. You can't steal land that's already legally yours!
Myth #7: "To support Israel is to hate the Palestinian people."
Contrary to Arab propaganda, those who call themselves Palestinians enjoy more freedoms and rights in Israel than if they lived in any Muslim nation. For it's not the Jews who hate and abuse the Palestinians, but their own terrorist leaders who steal billions of their foreign aid and deny refugees access back to their own home countries of Syria and Jordan.
Why, the Palestinians have been afforded several opportunities since 1948 to create another Palestinian state besides Jordan, but each time they have rejected those offers and instead responded with violence. Why? Because their ultimate goal is the annihilation of Israel. So, who exactly is hating who here?
With those myths busted, let's look at some of the reasons why Christians should support Israel:
1. Democracy
The nation of Israel is the only Western-style democracy in a sea of Islamic tyranny. Supporting Israel is to support the only nation in the Middle East which offers religious freedom and human rights to women.
2. Defense
Israel protects the West and Christianity by standing as the first line of defense against violent, radical Islam.
3. Economics
Israel contributes to the world a mind-boggling amount of food, medicines, and cutting-edge technologies that raise the standard of living throughout the world.
4. Blessing
When it comes to supporting the nation of Israel, God promised in Genesis 12, "I will bless those who bless you, and I will curse him who curses you..." Supporting Israel incurs God's blessing.
5. Biblical
It rather goes without saying that it is biblically correct for Christians to support God. Since God loves the Jewish people and wants them to return to Him, then shouldn't Christians want this as well? Loving Israel expresses our love for God.
6. Prophetic
And finally, whether you love or hate the nation of Israel, or even the Jewish people, regardless of what we mere mortals think -- Bible prophecy will be fulfilled. God's will will be done, and there's just no stopping it. After all, who could ever stand against the Living God and expect to win (Psalm 76:7; Hebrews 10:31)?
So, in conclusion, it's not "Should Christians really support Israel?" but rather -- Christians must support Israel!
Originally published at Lamb & Lion Ministries - reposted with permission.