Health & Human Services Has Been Weaponized For Transgender Advocacy 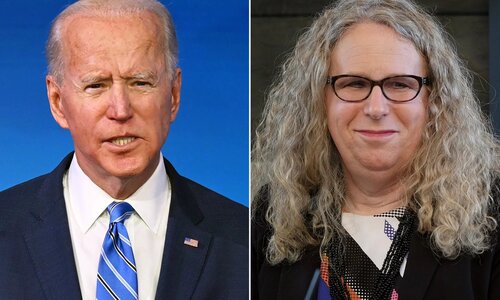 By Tony Perkins/Family Research Council April 01, 2021
Share this article:
The Biden administration made history last week, but not the kind that most Americans will celebrate. In a tight, near party-line vote, the Senate confirmed the president's transgender pick for deputy secretary of HHS, Rachel Levine -- whose idea of "health care" is sterilizing and mutilating young children.
"This is a scary time in American history," former HHS leader Roger Severino said. And after Levine's first statement on the job, that might be an understatement.
"As I prepare to take my oath of office and begin serving as assistant secretary for Health," the former Pennsylvania health official said, "I would like to take this opportunity to address members of the LGBTQ community... In particular, I want to address transgender youth. I know that each and every day you confront many difficult challenges.

Sadly, some of the challenges you face are from people who would seek to use your identity and circumstance as a weapon. It hurts. I know. I cannot promise you that these attacks will immediately cease," he went on, "but I will do everything I can to support you and advocate for you. What I can tell you is that there is a place for you in America and in our government. Our 'more perfect union' includes you, too."
By a 52-48 vote (with Republican Senators Lisa Murkowski of Alaska and Susan Collins of Maine defecting), the Senate sent one of the most radical LGBT extremists to the top levels of American government. As several people, including Senator Rand Paul (R-Ky.) have pointed out, it's not just Levine's personal story that concerns people, but his desire to use the government's largest budget to promote his dangerous agenda.
Senator Paul pressed repeatedly in Levine's confirmation hearing if he thought "minors were capable of making such a life-changing decision as changing one's sex?" Levine replied evasively, insisting that transgender medicine "is a very complex and nuanced field with robust research and standards of care."
Apparently, it's not so "nuanced" anymore, as Levine found a way on day one to announce his intentions to radically remake HHS as a weapon for transgender advocacy. He couldn't answer that question in the hearing, but he more than answered them with his direct appeal to America's children.

"Biden says he's going to be listening to the scientists. 'Listen to the science,' [they tell us.] We've heard this so many times," Severino shook his head. "But Dr. Levine, I fear, is going to put a transgender ideology first ahead of biological realities -- which, of course, matter tremendously when it comes to the practice of medicine, the advancement of science...
When I was at HHS, we rolled back a transgender mandate under Obamacare. We examined all the science. HHS itself has said that it's not going to issue a national coverage determination or sex reassignment surgeries because the data is not in, and there's not enough to support it yet. I'm afraid that Dr. Levine will come in with an agenda to start radicalizing the practice of medicine, to pursue this ideology that's not supported by sufficient science."
During Roger's time at the agency where Levine is now second-in-command, he met the new deputy. Back then, he explains, Levine wasn't so coy about what he believed about young people. When the HHS team asked about minors and transgender treatment, "I heard it directly," Severino explained, "and the answer was: 'Yes, yes, minors should be given cross-sex hormones and surgery when they have gender dysphoria'..."
"The activism runs deep," he warns. "It was evasive to the point of being disingenuous, not to answer Senator Paul when asked directly when I knew what the answer was, because I've heard it when the shoe was on the other foot and those doctors wanted to keep the Obama transgender mandate in place.
This is scary times when we're going to see this push, especially when it comes to minor children, 12 to 18, to have radical surgeries that will sterilize them. And you cannot turn back. And I'm afraid that's where HHS may be going if Levine gets confirmed."
Obviously, Roger said, everyone deserves to be treated with dignity and respect. Everyone needs to be shown kindness and compassion -- including Rachel Levine. But this is a serious question when it comes to minors (88 to 98 percent of whom grow out of their gender confusion), especially if the Left's only answer is "running downhill toward permanent surgeries and hormones, even sometimes against the wishes of parents. That's the wrong choice for public policy and health care."

Fortunately, several states have begun to recognize that -- and a bipartisan coalition has introduced a wave of bills to stop whatever Levine does on the national stage from crossing over certain borders. Arkansas State Rep. Robin Lundstrum (R), one of the sponsors of the model SAFE (Save Adolescents from Experimentation) Act, says that her state is doing everything it can to make sure that children under the age of 18 "cannot have sex change surgery or chemical castration."
On Wednesday's "Washington Watch," she pointed to the long list of decisions that society doesn't our kids to make. "We don't allow children to have illegal drugs. We don't allow children to smoke or drink. This bill protects the children of Arkansas from these type of procedures and allows them to get to [age 18] where they can make adult decisions and protect those children."
The response from the legislature, Robin said, has been "great." "In the House it passed by 70 votes, and now it's gone to the Senate committee -- and it passed overwhelmingly in the Senate committee. The bill also allows for counseling.
It doesn't deny any health procedures or anything like that. Unfortunately, a lot of people tried to make it into something that it's not. But I'm really thankful that members have... looked at the bill and read the bill. And the bill was very well done. I can't take credit for it. It's a group effort and I'm excited. I hope it passes."
One of the things she's most heartened by is that this isn't just a partisan effort. In the long list of states that have introduced these bills, both sides are trying to work together. "I reached out to a Democrat in Williamsburg and just asked him to give me a shout. I want to encourage him, because he's writing a similar bill. So this type of bill that crosses party lines. This isn't about Republican or Democrat, about protecting children."
Her hope, like most Americans, is that people pull together and realize what this is about. "It's about keeping children safe. Let them become an adult. A lot of good things can happen."
Originally published at Family Research Council - reposted with permission.