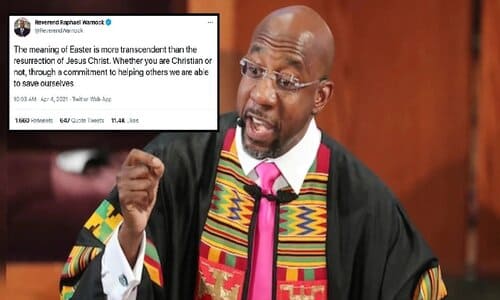 By PNW Staff April 06, 2021
Share this article:
Democratic Sen. Raphael Warnock of Georgia would probably like to have been known as a man who helped propel the Democrats to a Senate majority.  Instead, his legacy among Christians at least will be that of a heretic who literally reversed the very meaning of Easter with His Easter tweet.
"The meaning of Easter is more transcendent than the resurrection of Jesus Christ," said Warnock in the Tweet on Easter Sunday.
"Whether you are Christian or not, through a commitment to helping others we are able to save ourselves," he added.
The former pastor of Ebenezer Baptist Church where Martin Luther King Jr. once preached was lambasted on social media in response.

Christians of all stripes and backgrounds called out the heretical nature of his post, which flies in the face of the repeated and resounding message of the Gospel, which is that -- no matter how hard we try or how diligently we work -- salvation is forever beyond our reach, outside the person and sacrifice of Jesus. If human beings could earn their way into right relationship with God, Jesus' sacrifice on the cross would have been for nought.
A small sampling of responses from social media:
"With all due respect, this is literally the opposite of what the Gospel says. Ephesians 2 states that clearly. Faith alone, Christ alone," tweeted Jason Romano, an author and the director of media at Sports Spectrum. "Love God, Love others. We should always help others. But ... that's not how we're saved. Romans, Ephesians, the Gospels all make it clear we can't save ourselves. If we could, then Jesus dying on the cross for nothing."
Mark Jackson, the pastor of Oakhurst Baptist Church in Clarksdale, Miss., responded to Warnock by tweeting, "You sir have totally missed the meaning of this day. Without the resurrection of Christ, there is no hope of salvation at all. There is no greater meaning of this day than that of the resurrection of the Lord Jesus Christ."
"No, actually, that's the meaning," replied Dan McLaughlin of National Review.
"What kind of Reverend would say something like this. Jesus Christ died and then rose again to take the sins of the world away. You are poisoning the minds of Christians for political purposes," responded Samuel Williams, a disabled veteran.
"This is a great example of the classic heresy of Pelagianism: humans have the free will to achieve human perfection without divine grace," replied another critic.
"You know this is literal heresy, right?" asked Conrad Close.

Easter does not, in fact, transcend the resurrection of Christ. The resurrection is the entire point of the holiday. There is nothing more important, certainly not to Christians and certainly not on Easter Sunday itself. There's a reason why Easter is the most important holy day in the liturgical season, more important even than Christmas. Without Christ's resurrection, there is no salvation.
As St. Paul put it in his first letter to the Corinthians, "And if Christ has not been raised, our preaching is useless and so is your faith.."
Allie Stuckey, an author and host of the podcast "Relatable," added, "There is nothing more transcendent than the resurrection of the God-man, Jesus. Literally: His resurrection transcends our finite conceptions of science and rationality, that the Word became flesh, dwelt among us, then was slain for our sins only to conquer death three days later?"
Andrew Walker, an ethics and public theology professor at The Southern Baptist Theological Seminary, said Warnock's tweet is an example of "basic theological liberalism" that is "completely at odds with the direct witness and essence of the New Testament," adding, "There is no salvation in the senator's tweet whatsoever."
California-based Pastor Darrell B. Harrison argued, "This is what the heresy of liberation theology does -- reduces the significance of the resurrection of Jesus Christ, the Son of God, to self-salvific moralism and thereby making ourselves God."
It's worth noting, of course, that the apostle Paul addressed this very issue in his letter to Christians in Ephesus (Ephesians 2:4-10):
But God, being rich in mercy, because of the great love with which he loved us, even when we were dead in our trespasses, made us alive together with Christ -- by grace you have been saved -- and raised us up with him and seated us with him in the heavenly places in Christ Jesus, so that in the coming ages he might show the immeasurable riches of his grace in kindness toward us in Christ Jesus.

For by grace you have been saved through faith. And this is not your own doing; it is the gift of God, not a result of works, so that no one may boast. For we are his workmanship, created in Christ Jesus for good works, which God prepared beforehand, that we should walk in them.
Without responding to the onslaught of criticism Sunday afternoon, the reverend-turned-senator decided to delete his controversial tweet.
This is not the first time Warnock, a longtime civil rights activist and Georgia's first black senator, has faced criticism for controversial comments.
Warnock was called out by black pastors in December for supporting abortion in what they saw as a betrayal of traditional Christian and Biblical values.
"We implore you to uphold the Biblical defense of life and to fight against the systemic racism of abortion," read the letter from 25 black pastors.
Laurie Cardoza-Moore, the founder of Proclaiming Justice to the Nations, responded in an op-ed for The Christian Post to comments Warnock made in the past referring to Jesus as a "poor Palestinian prophet."
"The word Palestine does not appear one time throughout the New Testament and the Philistines referenced in the Old Testament became extinct during Biblical times," wrote Cardoza-Moore, who leads an evangelical Christian organization that encourages Christians to stand with Israel and the Jewish People against the rise of global anti-Semitism
"It appears that Warnock is more interested in pushing a subversive political agenda than teaching God's word," she remarked. "Warnock's teachings are a fusion of two anti-Semitic doctrines that have led to the murder of countless Jews throughout history: Replacement Theology and Liberation Theology."
She added, "The fact that Warnock pushes the Palestinian Jesus narrative is indicative of his broader perspective."
"His spin doctors are working around the clock to cover his past and paint him as an heir of Rev. Martin Luther King Jr, a Zionist and staunch ally of Israel, when he is actually cut from the same cloth as his teacher Rev. Jeremiah Wright," Cardoza-Moore stated.
Warnock is a graduate of Union Theological Seminary, which has also come under fire for it's promotion of apologizing to plants for the sins of climate change.