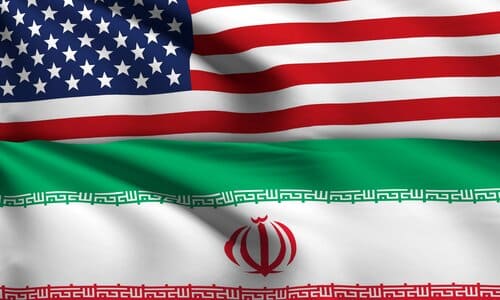 By Ariel Ben Solomon/JNS.org April 13, 2021
Share this article:
The renewal of indirect talks last week between the United States and Iran to revive the 2015 nuclear deal--the Joint Comprehensive Plan of Action (JCPOA)--appears to have escalated tensions in the Middle East, as Israel makes it clear to its ally that it will not accept Iranian nuclear capability.
Israeli media reported on Sunday that its Mossad intelligence agency was behind a blackout on Iran's underground Natanz nuclear facility in what seems to be a major setback for its nuclear program.
Ali Akbar Salehi, head of the Atomic Energy Organization of Iran, blamed Israel and called the act a "desperate move" and "nuclear terrorism," reported the AP.

The sabotage of the Iranian nuclear facility also could add difficulties to the U.S.-Iran negotiations.
John Hannah, a senior fellow at the Jewish Institute for National Security of America, told JNS that at the heart of the administration's plan to rejoin the JCPOA, none of President Joe Biden's advisers want to admit that there is no deal without removing terrorism-related sanctions.
"The fact is there's no way back to the deal unless the United States is willing to accept Iran's demand that massive sanctions relief be granted to the central pillars of its regionwide terrorist enterprise: its Central Bank, oil sector and the IRGC [Islamic Revolutionary Guard Corps]," he said.
"There's no escaping the reality that at the core of the administration's Iran strategy is a devil's bargain that will funnel billions of dollars into Iran's imperial project across the Middle East in exchange for little more than a temporary reprieve from Iran's relentless march towards nuclear-weapons capability."
The renewed talks come as tensions remain high with Israel and other Arabs states, and as the International Atomic Energy Agency continues to chart Iran's growing nuclear advances.

On Friday, the U.N. nuclear watchdog noted a new breach by Iran of the nuclear deal with world powers at the same time talks were going on to renew the agreement, according to a report shown to Reuters.
The report said that Iran was recovering scrap fuel plates with uranium enriched to nearly 20 percent, which was previously agreed to be "unrecoverable."
'America has caved'
Harold Rhode, a longtime former adviser on Islamic affairs in the U.S. Defense Department of Defense, said "the Iranians are having a field day humiliating us."
America has "shown weakness--the more Iran demands, the more the United States gives in," he added.
Iran began enriching uranium at Natanz last month using advanced IR-4 centrifuges, according to a new report by the International Atomic Energy Agency.
Rhode said that U.S. allies in the region, such as Israel, Saudi Arabia, the United Arab Emirates and Egypt, are looking for other alternatives. The media of our allies in the region "are full of articles which, taken in their cultural context, indicate that the United States betrayed them and that China is making a bid to replace America as the world's superpower."
The United States called talks in Vienna with Iran "indirect."

Rhode said it may make "American negotiators feel good about themselves, but to our allies that have relied on the United States for protection and to enforce the international order, the word 'indirect' and 'direct' make no difference since the result is the same. America has caved."
As a result, he added, "more Arab countries are looking to Israel to assume American's role, though they would never say so publicly."
Earlier this month, The New York Times reported that Israel had informed the United States that it was responsible for an attack against the Iranian vessel, the MV Saviz. Quoting an unnamed U.S. official, the report stated that Israel claimed that it was retaliation for Iranian attacks against Israeli ships in recent months.
Rhode said no one believed that it was an American attack at the time.
He stated: "Israel has the guts and ability to do so. America has the ability but has lost its way."
Originally published at JNS.org - reposted with permission.