Covid Detection Microchips Beneath The Skin - From Science Fiction To Reality 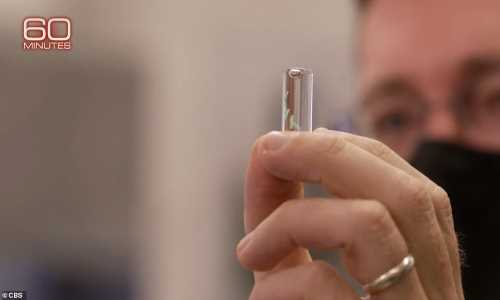 By PNW Staff April 13, 2021
Share this article:
As the debate over Vaccination passports continues to heat up - the Pentagon has just added a whole new level of concern over privacy and government control with revelations that is has created a microchip to be inserted under the skin, which can detect COVID-19 infections.
Retired Colonel Matt Hepburn revealed the device on 60 minutes Sunday night. 'You put it underneath your skin and what that tells you is that there are chemical reactions going on inside the body, and that signal means you are going to have symptoms tomorrow,' he explained.
'It's like a "check engine" light,' said Hepburn.
'Sailors would get the signal, then self-administer a blood draw and test themselves on site.
'We can have that information in three to five minutes.
'As you truncate that time, as you diagnose and treat, what you do is you stop the infection in its tracks.'
He said they were inspired by the struggle to stem the virus' spread onboard the USS Theodore Roosevelt, where 1,271 crew members tested positive for the coronavirus.

If current vaccination rates in the military are any indication however, many troops may not be too eager to jump on the microchip bandwagon.
Research shows that so far a third of troops have refused to take the vaccine.  Many indicated they were concerned over long term health affects but also, ironically, that it might contain a microchip devised to monitor them or be used for some type of of government control.
This is not the first time researchers have come up with a method to help manage and detect covid or show proof of vaccinations.
Researchers had previously found a way to leave a "mark" under the skin that will enable medical authorities to know whether someone has been vaccinated or not.  This "mark" is created using a specialized dye that is not visible to the naked eye, and the dye is delivered under the skin as part of the vaccination process.
If that sounds quite creepy to you, that is because it is very creepy.  Scientists at MIT wanted to create an easy method for keeping track of vaccinations in parts of the world where electronic databases are not commonly used, and what they came up with is extremely alarming...
MIT researchers have now developed a novel way to record a patient's vaccination history: storing the data in a pattern of dye, invisible to the naked eye, that is delivered under the skin at the same time as the vaccine.

"In areas where paper vaccination cards are often lost or do not exist at all, and electronic databases are unheard of, this technology could enable the rapid and anonymous detection of patient vaccination history to ensure that every child is vaccinated," says Kevin McHugh, a former MIT postdoc who is now an assistant professor of bioengineering at Rice University.
Unsurprisingly, the MIT article announcing this discovery stated that this research had been funded "by the Bill and Melinda Gates Foundation and the Koch Institute Support (core) Grant from the National Cancer Institute".
In order to see the "mark" that has been left behind by the specialized dye, authorities will need a "specially equipped smartphone", and we are being told that the "mark" can be read for at least five years after the initial injection...
The researchers showed that their dye, which consists of nanocrystals called quantum dots, can remain for at least five years under the skin, where it emits near-IR light that can be detected by a specially equipped smartphone.
To many, this invention may sound like a much less painful method to deliver vaccines and a great way to keep track of who has been vaccinated.
But for many others, this sort of technology is a giant move in the wrong direction.  In addition to being a gross violation of our privacy rights, many are concerned that we could eventually be approaching the days warned about in Revelation chapter 13...
16 And he causeth all, both small and great, rich and poor, free and bond, to receive a mark in their right hand, or in their foreheads:
17 And that no man might buy or sell, save he that had the mark, or the name of the beast, or the number of his name.
18 Here is wisdom. Let him that hath understanding count the number of the beast: for it is the number of a man; and his number is Six hundred threescore and six.

According to the Bible, someday people will not be able to perform basic day to day activities without a mark, often called the Mark of the Beast.
And even now, we are being warned that those that do not take a COVID vaccine may not be able to live normal lives.  Just consider what Ontario's Chief Medical Officer Dr. David Williams just said...
"What we can do is to say sometimes for access or ease of getting into certain settings, if you don't have vaccination then you're not allowed into that setting without other protection materials," said Williams.
"What may be mandatory is proof of...vaccination in order to have latitude and freedom to move around...without wearing other types of personal protective equipment," he added.
We are going to need proof that we have been vaccinated "in order to have latitude and freedom to move around"?
The news is full of stories each week that contrast vaccination issues with restrictions of freedoms.  This week New Zealand Prime Minister Jacinda Ardern has said border workers who refuse to take the C0VID-19 vaccine will lose their jobs.
Another story that caught a lot of people off guard was how only vaccinated people were being allowed to evacuate the island of St Vincent (due to volcanic activity) via cruise ship.  Those not vaccinated had to find alternative means.
Even such issues as shared parental custody has become a hot topic when one parent refuses to vaccinate.  Look for lots more controversy in the days ahead.
Will we eventually get to a point where we are not allowed to go to work and our kids are not allowed to go to school without a COVID vaccine?  Or perhaps you will not be allowed into a public place to conduct business without proof?
And could such restrictions foreshadow a day when an even more sinister scheme appears on the global stage?
These are such unusual times, and while vaccinations and microchip technology by themselves may not be the Mark of the Beast, this may be a preview of what is to come.