7 Reasons Why Vaccine Passports Are A Dangerous Idea 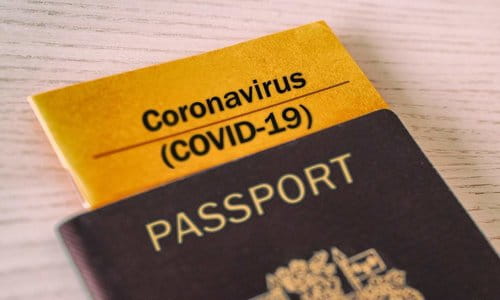 By Patrick Wood/Activist Post April 15, 2021
Share this article:
As the use of vaccine passports snowballs around the world, concerns about their potential reach and implications are growing.
Vaccine passports (or passes or certificates) are being rushed through around the world, including in places where most people have not even been able to get a vaccine yet. They are being touted as a way of jump-starting the global economy by providing a means for people to prove their vaccinated status, allowing them to travel, shop, go to the gym, attend sporting and cultural events and conduct other indoor activities.
Countries like Israel, Saudi Arabia, and Singapore have already introduced vaccine passports in the last couple of months.
Of course, the use of the word "passport" is deceptive. "Passport" implies a document endorsed by a state that establishes citizenship and guarantees diplomatic protection. A traditional passport does not require the bearer to participate in a vaccine program, although immunity certificates have existed for diseases such as Yellow Fever.
Another difference is that a vaccine passport is likely to come in the form of a digital document. The potential scope of its application is also far broader than that of a normal passport. It could be required not only to establish identity and vaccine status at national borders but also to travel, access public buildings and basic services within one's own country of residence.

In countries that already have an established national health service, such as the UK and Israel, the vaccine passport has been mandated at state level. In the US tech and health-care companies are firmly in the driving seat. At least 17 alternative programs are currently under development.
As for the EU, it has proposed issuing "digital green certificates" that would allow EU residents to travel freely across the 27-nation bloc by the summer as long as they have been vaccinated, tested negative for COVID-19 or recovered from the disease. It's worth noting that the EU has been studying the feasibility of creating a common EU vaccination card since early 2019.
International Initiatives
There are also initiatives taking place internationally such as the Smart Vaccination Certificate Working Group, whose partners include WHO, UNICEF, ITU and the European Commission. The group "is focused on establishing key specifications, standards and a trust framework for a digital vaccination certificate to facilitate implementation of effective and interoperable digital solutions that support COVID-19 vaccine delivery and monitoring, with intended applicability to other vaccines."
Another initiative is the CommonPass digital health app being developed by the Commons Project Foundation (CPJ), which was founded by the Rockefeller Foundation and is supported by the World Economic Forum.
The CommonPass is both a framework and an app that "will allow individuals to access their lab results and vaccination records, and consent to have that information used to validate their COVID status without revealing any other underlying personal health information."
Then there's ID2020, a nongovernmental organization that advocates for digital IDs for the billion undocumented people worldwide and under-served groups like refugees. In 2019, ID2020 launched a new digital identity program in collaboration with the government of Bangladesh and the Global Alliance for Vaccines and Immunization (GAVI).
It is now involved in the Good Health Pass Collaborative, "an open, inclusive, cross-sector initiative, bringing together leading companies and organizations from the technology, health, and travel sectors".
Pause for Thought
Some of these initiatives are already being piloted by companies, including airlines, and local or regional authorities. All Nippons Airways has started a test of the CommonPass on its flights from Tokyo Haneda to New York. Last week New York unveiled its Excelsior pass, which is based on technology from IBM.
Other states are likely to follow suit. France has also just completed a month-long trial of a health passport app for Air France passengers travelling to Martninique and Guadeloupe.
The speed at which these initiatives are being rushed out should give pause for thought. Just as with contact tracing apps, the rollout is haphazard and rife with conflicts of interest. The technology is unproven and the privacy issues are glaring. Below are seven reasons why I believe vaccine passports should worry us. Perhaps you can think of more.
1. We still don't know how effective or safe the vaccines are.
The ostensible goal behind the vaccine passport is to provide proof that a person has taken an officially approved vaccine and therefore poses less of a contagion risk.
Yet we still don't know just how effective or safe each vaccine is. Naturally, the efficacy levels of each vaccine vary. As WHO itself concedes, there is still uncertainty over whether inoculation actually prevents transmission of the virus.
We also have no idea how long the immunity -- partial or otherwise -- provided by each vaccine lasts. What's more, some of the vaccines appear to have reduced efficacy against some variants, including the B.1.351 strain (originally identified in South Africa).
It's not just the potential lack of efficacy that should have us worried. There are also big safety concerns. Numerous adverse reactions have already been reported around the world.

In the case of the vaccines developed by AstraZeneca and Johnson & Johnson, concerns about blood clotting side effects have led some countries to restrict or even suspend their use.
In the US, the latest VAERs data released on April 12 showed over 46,000 reports of adverse events following COVID vaccines. Women have been disproportionately affected, accounting for 77% of cases.
Many are experiencing abnormal menstruation, raising fears that the vaccines could even affect fertility.
2. Vaccine geopolitics.
To all intents and purposes the West is already locked in a new cold war with China and Russia. Tensions are escalating on an almost daily basis.
Against such a backdrop, it's hardly beyond the realms of possibility that at some point down the line countries or companies in the West will refuse to recognise vaccines certificates that are based on Russian or Chinese vaccines, and vice versa. The justifications for doing so will grow as bad news continues to emerge about the efficacy and safety of vaccines.
Over the past weekend Western news sources reported that George Fu Gao, director of the Chinese Center for Disease Prevention and Control, had publicly acknowledged that Chinese-made vaccines currently offer low efficacy against the virus. "We will solve the issue that current vaccines do not have very high protection rates," he said, adding that adjusting the dosage or sequential immunisation and mixing vaccines might boost efficacy.
Since then China has backtracked on the comments. But the episode nonetheless raises serious questions for those nations relying heavily on the Chinese jab, including many in Latin America.
If Chinese vaccines are not as effective as originally thought, it's perfectly feasible that some countries in the West will refuse to acknowledge vaccine passes sporting the name of a Chinese vaccine. As such, rather than freeing up global travel, vaccine passports could up erecting new barriers.
3. The potential for mission creep.
To begin with, SMART Health Cards are likely to include a person's complete name, gender, birth date, mobile phone number, and email address in addition to vaccination information. But although advertised as digital vaccination records, they are clearly intended to be used for much more.
Public information on the protocol notes that SMART Health Cards are "building blocks that can be used across health care," including managing a complete immunization record that goes far beyond COVID-19 vaccines, sharing data with public-health agencies, and communication with health-care providers.