Scientists Recreating Days Of The Nephilim With Species Mixing 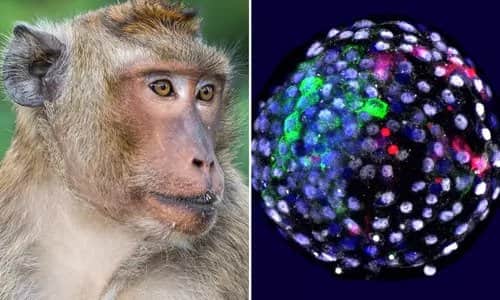 By Adam Eliyahu Berkowitz/Israel 365 News April 21, 2021
Share this article:
Researchers are injecting human stem cells into monkey embryos and even scientists are disturbed by the ethical implications. For the Biblically minded, the implications are clear.
MIXING MONKEY AND HUMAN CELLS
Researchers in California published their results in The Cell on Thursday describing how they successfully "created" embryos that were a mixture of monkey and human cells. The abstract, titled "Chimeric contribution of human extended pluripotent stem cells to monkey embryos ex vivo", explains that the study was focused on creating cells that could be used to produce organs for people who need transplants.
Chimerism is a condition whereby an organism or person has not one but two complete genomes or sets of DNA in their body. The condition is named for the chimera, a fire-breathing creature in Greek mythology usually depicted as a lion, with the head of a goat protruding from its back, and a tail that might end with a snake's head.
The researchers injected 25 cells known as induced pluripotent stem cells from humans -- commonly called iPS cells -- into each of 132 macaque monkey blastocytes,  an early structure in embryonic development in mammals,  and reared the resulting chimeras in culture dishes for up to 20 days.  After 13 days, the human cells were still present in about one-third of the chimeras.

In recent years, researchers have been injecting human stem cells into sheep and pig embryos in an effort to grow human organs in animals for the purposes of transplantation. Macaque monkeys are more closely genetically related to humans than are sheep and pigs. The researchers believe they will be able to re-engineer the pathways observed in the monkey-human embryos and apply that knowledge to embryos in sheep and pigs.
The moral implications were evident even to the researchers.
"My first question is: Why?" Kirstin Matthews, a fellow for science and technology at Rice University's Baker Institute, told NPR. "I think the public is going to be concerned, and I am as well, that we're just kind of pushing forward with science without having a proper conversation about what we should or should not do."
"I don't see this type of research being ethically problematic," said Insoo Hyun, a bioethicist at Case Western Reserve University and Harvard University. "It's aimed at lofty humanitarian goals."
"Our goal is not to generate any new organism, any monster,"  Juan Carlos Izpisua Belmonte, a professor in the Gene Expression Laboratory of the Salk Institute for Biological Sciences in La Jolla, Calif. and a co-author of the Cell study, told NPR. "And we are not doing anything like that. We are trying to understand how cells from different organisms communicate with one another."
The biggest concern is that someone could attempt to bring one of these chimeric embryos to term, inadvertently creating animals that have partly human brains, endowing them with some semblance of human consciousness or human thinking abilities.
Such a "chimeric" half-human creature is actually being considered by scientists in order to study neurological conditions such as Alzheimer's and Parkinson's diseases.
"Should it be regulated as human because it has a significant proportion of human cells in it? Or should it be regulated just as an animal? Or something else?" Matthews said. "At what point are you taking something and using it for organs when it actually is starting to think and have logic?"
FORBIDDEN BY TORAH LAW
In Torah law, such a creature raises Halachic (Torah law) issues. Human abortion is, of course, forbidden by the Torah though animal abortion is not. The new species created in this research was genetically similar to humans and ending the development of the fetuses may be forbidden.
Rabbi Moshe Avraham Halperin of the Machon Mada'i Technology Al Pi Halacha (the Institute for Science and Technology According to Jewish Law) stated in response to the report that there are clear Torah guidelines for this new technology. Rabbi Halperin referred to the Biblical law concerning mixing of species.

Thou shalt not let thy cattle gender with a diverse kind: thou shalt not sow thy field with mingled seed: neither shall a garment mingled of linen and woollen come upon thee. Leviticus 19:19
"It is forbidden to create a creature that is a mixture of species, but as long as they are not producing a new creature that has a different form, it is permitted," Rabbi Halperin told Israel365 News.
However, he noted, "Improving species, even the human race, is not forbidden by Jewish law. Changing the color of the skin or hair is permitted, even more so when it concerns removing genetic maladies. But the process certainly needs oversight."
"PLANET OF THE APES"
Another ethical concern is that the resulting chimera might produce human sperm or eggs. This is also a possibility that researchers would like to investigate as it may be useful for studying human development and infertility.
"Nobody really wants monkeys walking around with human eggs and human sperm inside them," said Hank Greely, a Stanford University bioethicist who co-wrote an article in the same issue of the journal that critiques the line of research while noting that this particular study was ethically done. "Because if a monkey with human sperm meets a monkey with human eggs, nobody wants a human embryo inside a monkey's uterus."
"I don't think we're on the edge of beyond the Planet of the Apes. I think rogue scientists are few and far between. But they're not zero," Greely said. "So I do think it's an appropriate time for us to start thinking about, 'Should we ever let these go beyond a petri dish?' "
NEPHILIM: SEXUAL SIN OF MIXING SPECIES
Mixing of species is described in the Bible in a manner disturbingly similar to the experiment mixing human genetic material with developing monkey fetuses. In Genesis, " divine beings" and, later, Nephilim interbred with human women. The result was so abhorrent to God that he severely limited the lifespan of men.
The divine beings saw how beautiful the daughters of men were and took wives from among those that pleased them. Hashem said, "My breath shall not abide in man forever, since he too is flesh; let the days allowed him be one hundred and twenty years." It was then, and later too, that the Nephilim appeared on earth--when the divine beings cohabited with the daughters of men, who bore them offspring. They were the heroes of old, the men of renown. Genesis 6:2-4

Directly after this, men became evil and God decided to bring a flood to destroy all life. According to Jewish tradition, the animals were killed as they were equally culpable due to being part of man's sexual sins. It may be that in addition to the sin of bestiality being based on the sexual act, the mixing of the genetic material of two species is also forbidden.
This connection between sexual sin and the mixing of species, animal and man as well as man and near-divine beings, was noted by Rabbi Yosef Berger, rabbi of the Tomb of King David on Mount Zion. Rabbi Berger explained that the verse forbidding mixing breeds of animals directly preceded a section of the Torah dealing with sexual impropriety.
And whosoever lieth carnally with a woman, that is a bondmaid, betrothed to an husband, and not at all redeemed, nor freedom given her; she shall be scourged; they shall not be put to death, because she was not free. Leviticus 19:20
The rabbi explained the connection between the two distinct commandments.
"This is also expressed in the sin of the generation of Noah, which, according to Jewish tradition was the forbidden mixing of animals and man," Rabbi Berger told Israel365 News, quoting Genesis.
And Hashem said: 'I will blot out man whom I have created from the face of the earth; both man, and beast, and creeping thing, and fowl of the air; for it repenteth Me that I have made them.' Genesis 6:7
"Noah's generation sinned sexually, but it was expressed in the mixing of species," he explained.
"This sexual sin would prevent the coming Messianic era as the connection between man and woman is a holy part of the process of bringing geula (redemption). This is the basis of the requirement to be fruitful and multiply: to bring Moshiach (Messiah)."
SPREADING VIRUS
Another serious concern is that using organs from animals for transplants may lead to viruses spreading from animals to humans. The possibility of trans-species viruses was especially concerning as the California researchers cooperated with Chinese researchers from the Kunming University of Science and Technology in Yunnan.
The new study was made possible last year when the Chinese team at Kunming University developed technology that allowed monkey embryos to stay alive and grow outside the body for an extended period of time.
These concerns led to such research combining human stem cells to create animal embryos that are partly human. This moratorium was lifted in 2016.
Dr. Anna Smajdor, lecturer and researcher in biomedical ethics at the University of East Anglia's Norwich Medical School, said it posed "significant ethical and legal challenges".
"The scientists behind this research state that these chimeric embryos offer new opportunities, because 'we are unable to conduct certain types of experiments in humans'," Smajdor said to the BBC. "But whether these embryos are human or not is open to question."
Prof. Julian Savulescu, director of the Oxford Uehiro Centre for Practical Ethics and co-director of the Wellcome Centre for Ethics and Humanities, University of Oxford, said the research "opens Pandora's box to human-nonhuman chimeras".
"These embryos were destroyed at 20 days of development but it is only a matter of time before human-nonhuman chimeras are successfully developed, perhaps as a source of organs for humans," Savulescu said to the BBC. "That is one of the long-term goals of this research."
Originally published at Israel 365 News - reposted with permission.