Is The Stage Being Set For Great Deception? - UFO Sightings More Than Double 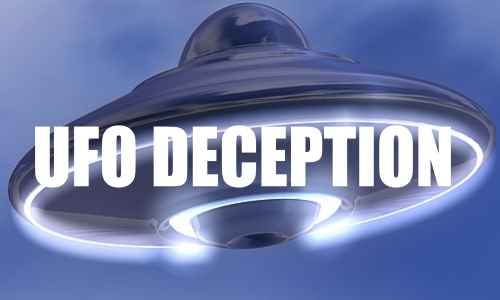 By Michael Snyder/End of the American Dream April 23, 2021
Share this article:
Did you know that the number of reported UFO sightings has increased dramatically over the past two years?  I didn't realize this either until I looked up the numbers.  Of course the skeptics will always find a way to explain away any facts that they do not like, but to me it appears that something very unusual is happening.
According to the New York Times, more than 7,200 sightings were reported to the National UFO Reporting Center in 2020, and that represented an increase of "about 1,000" from the year before...
Sightings of unidentified objects in 2020 nearly doubled in New York from the previous year, to about 300, according to data compiled by the National U.F.O. Reporting Center. They also rose by about 1,000 nationwide, to more than 7,200 sightings.

Of course that same New York Times article blames COVID for the rise in sightings.
We are being told that people had more free time on their hands in 2020 because of COVID.
And we are also being told that people spent more time looking up into the sky in 2020 because of COVID.
These days, COVID is being blamed for just about everything, and so it seems kind of natural to blame COVID for the increase in UFO sightings too.
And I almost started to believe the New York Times until I came across the numbers for the previous year.
It turns out that the increase in UFO sightings during 2019 was even greater than the increase that we witnessed during 2020...
There was a rise in the number of North Americans who looked up into the sky in 2019 and found something that didn't look like a bird or a plane.
The National UFO Reporting Center, which tracks calls and messages from people around the U.S. and Canada about strange sightings in the sky, reported that it received 5,971 sightings in 2019 -- a jump from 3,395 in 2018.
There was no COVID pandemic in the U.S. in 2019.
So why did the number of sightings rise by more than 2,500 during that year?
Overall, the number of UFO sightings has more than doubled over the past two years.
That seems rather noteworthy, doesn't it?
It is starting to become exceedingly clear that something is going on in our skies that defies "rational" explanation.

On Wednesday morning the Drudge Report ran a headline that breathlessly declared "Commercial Airline Pilots Keep Reporting UFOs", and this is the story that the headline was linked to...
By combing through thousands of reports in a government flight incident database, VICE World News has uncovered dozens of recent UFO sightings from Canadian and international airlines.
They include a pair of WestJet flights near B.C.'s Okanagan Valley that allegedly saw "a bright, white strobe-type light" above them on the night of March 16, 2017, and a pre-dawn Jan. 10, 2015 encounter outside Regina, Saskatchewan, when "multiple aircraft reported a very large object with a small white light in the middle, surrounded by a halo" that "appeared to descend from above" 41,000 feet.
We rely on level-headed commercial airline pilots to fly us from one place to another.
They are highly competent and they are highly respected.
So the fact that so many of them have filed official reports in which they describe witnessing UFOs is definitely something that we should take very seriously.
And according to one Canadian UFO researcher, the reports from these pilots are consistent with other UFO sightings in Canada going all the way back to the 1940s...
According to researcher and filmmaker Matthew Hayes, there is a "very high degree of consistency" between the reports found in CADORS and the ones he uncovered for his 2019 doctoral dissertation on Canada's Cold War UFO records.
"Canadians have been reporting the same types of things, unabated, since the 1940s," Hayes said.  "Historically, it's also been incredibly challenging to get the Canadian government to talk about this. Compare that with the U.S., where officials seem much more eager and ready to discuss the topic."
Meanwhile, UFO sightings have been making waves in the U.S. lately too.
In fact, the Pentagon created quite a stir recently when it confirmed that leaked UFO photos taken in 2019 were indeed legitimate.  The following comes from CNN...
The Defense Department has confirmed that leaked photos and video of "unidentified aerial phenomena" taken in 2019 are indeed legitimate images of unexplained objects.
Photos and videos of triangle-shaped objects blinking and moving through the clouds were taken by Navy personnel, Pentagon spokeswoman Sue Gough said in a statement to CNN. She also confirmed that photos of three unidentified flying objects -- one "sphere" shaped, another "acorn" shaped and one characterized as a "metallic blimp" -- were also taken by Navy personnel.

In the old days, the Pentagon would have never made such a shocking admission.
And we have also learned that in one stretch during 2014 and 2015 U.S. Navy pilots were seeing UFOs on an "almost daily" basis...
Every once in a while, a news item surfaces that prompts you to throw up your hands, sink back into your chair and begrudgingly welcome the impending apocalypse. The most recent item on this docket: A New York Times report confirming that between 2014 and 2015, Navy pilots reported "almost daily" sightings of unidentified flying objects lurking in the air, including one that resembled a "spinning top moving against the wind."
These UFOs that Navy pilots were encountering were not just stationary objects.  In fact, some of them "reached seemingly hypersonic speeds"...
According to the Times report, the sightings began in the summer of 2014, with Navy pilots reporting that they spotted the vessels nearly 30,000 feet in the sky while they were conducting training maneuvers between Virginia and Florida. Sometimes, they reported, the vessels reached seemingly hypersonic speeds.
One of the Navy pilots even almost collided with one of the objects, which apparently (and justifiably) freaked him out so much that he issued an official incident report about it to the Navy. The sightings apparently grew so frequent that earlier this year, the Navy issued official guidelines for how to report "unexplained aerial phenomena."
Do the skeptics want to try to claim that all of those Navy pilots were crazy?
At this point, it is becoming increasingly difficult for UFO skeptics to retain their credibility.
Something is clearly happening, and I believe that all of the leaks that have been occurring are meant to mentally condition us for further disclosures in the future.
The stage is being set for a deception of absolutely epic proportions, and most people will swallow whatever they are told hook, line and sinker.
Originally published at End Of The American Dream - reposted with permission.