Bill Gates, China & Your DNA - The Race To Control The World's Biodata 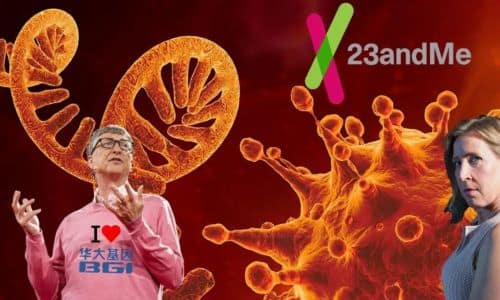 By Derrick Broze/Activist Post April 30, 2021
Share this article:
Is there a connection between China, Bill Gates, YouTube, and DNA collection?
Recent reports reveal that a Chinese company with connections to the Gates Foundation is involved in COVID-19 testing and poses a potential threat to American privacy, particularly the medical and health data of those who have been tested for COVID-19.
In late January, CBS' 60 Minutes reported:
"60 Minutes has learned Chinese company BGI Group, the largest biotech firm in the world, offered to build COVID labs in at least six states, and U.S. intelligence officials issued warnings not to share health data with BGI.
The largest biotech firm in the world wasted no time in offering to build and run COVID testing labs in Washington, contacting its governor right after the first major COVID outbreak in the U.S. occurred there. The Chinese company, the BGI Group, made the same offer to at least five other states, including New York and California, 60 Minutes has learned. This, along with other COVID testing offers by BGI, so worried Bill Evanina, then the country's top counterintelligence officer, that he authorized a rare public warning."
"Foreign powers can collect, store and exploit biometric information from COVID tests" declared the notice. Evanina believes the Chinese are trying to collect Americans' DNA to win a race to control the world's biodata."

Evanina said a foreign entity could learn about a person's current or future medical conditions by studying their DNA and using this information to gain a monopoly over necessary drugs and treatments.
BGI Group declined to be interviewed by 60 Minutes and said the idea that Americans genomic data has been compromised by BGI is "groundless".
Concerns around BGI also arose in late January when Reuters reported that more than 40 publicly available documents and research papers show BGI's links to the People's Liberation Army (PLA). Reuters said the research dealt with topics as varied as mass testing for respiratory pathogens to brain science.
The Gates Foundation and BGI
In March, journalist Natalie Winter of National Pulse uncovered documentation of a relationship between the Bill and Melinda Gates Foundation and BGI going back nearly a decade. Winter found a Memorandum of Understanding (MOU) between the Gates Foundation and BGI to "form a collaboration on global health and agricultural development with the goal of achieving common objectives in health and agricultural development."
Specifically, this collaboration deals with developments in human, plant, and animal genomics, the study of DNA. In the press release for the MOU, the co-founder of BGI directly mentions the partnership as focused on genomics.
"BGI looks forward to partnering with the Bill & Melinda Gates Foundation in this significant collaboration to apply genomics research to benefit global human health," said Dr. Huanming Yang, Chairman and Co-Founder of BGI.
Bill Gates also visited BGI headquarters in 2010, according to a report from the Financial Times. The Times stated that BGI "is working towards a goal of building a huge library based on the DNA of many millions of people." BGI's goal is to use this information for new drugs, genetic research, and "transforming public health policy".
It would appear the COVID-19 crisis has helped BGI and the Gates Foundation step into the role of influencing and transforming international health policy.
Winter's report also notes that:
"the Gates Foundation has also funded BGI projects relating to genome sequencing alongside Chinese Communist Party bodies such as the Ministry of Science and Technology and Academy of Agricultural Sciences.
Similarly, Dr. Tadataka Yamada, the former president of the Bill & Melinda Gates Foundation's global health program, serves as the Chairman of BGI's Scientific Advisory Board."
It's clear that BGI Group and the Gates Foundation have a documented relationship over the last the decade. It's equally apparent that BGI Group has an extensive relationship with the Chinese military and government. It is these connections - the relationship that exists between the Chinese government, the BGI Group, and the Gates Foundation - which has sparked fears regarding the potential misuse for the COVID-19 tests manufactured by BGI.

BGI and the DNA Testing Industry
Since March 2020, BGI has sold millions of their COVID-19 test kits around the world, including the United States, Europe, and Australia. Reuters reports that shares of BGI Genomics Co. have doubled in the last year, giving BGI a market value of around $9 billion USD.
The company is based in Shenzhen, on the coast of Guangdong, China. They have made a name for themselves by selling genetic sequencing services around the world, which has helped them to create a large database of DNA. BGI is also well known for creating a cloned pig in 2010.
The company has regularly partnered with the Chinese People's Liberation Army. BGI and the PLA's Academy of Military Medical Science share a dozen patents for DNA tests. Coincidentally, Reuters notes that one patent from 2015 is for a "low-cost test kit to detect respiratory pathogens, including SARS (Severe Acute Respiratory Syndrome) and coronaviruses."
Further, Chen Weijun, BGI's chief infectious disease expert, is listed as an inventor on the patent while also holding the title of one of the first scientists reported to have sequenced COVID-19 used samples from a military hospital in Wuhan.
BGI says the test kit developed with the Chinese military is not the same one sold to foreign countries.
The danger of COVID-19 tests being used as a method for gathering genomic data on the unsuspecting public is part of a larger conversation about the dangers posed by genealogy companies generally. Millions of people around the world have voluntarily submitted their DNA in exchange for information about their ancestry. The vast majority of the users of these companies, such as Ancestry and 23andMe, do not read the Terms of Service which outline how the genealogy firms can use the data.
One of the ways this data is used is to sell it to biotech companies who are interested in developing new drugs and therapies. Clearly, there are governments and militaries who also have an interest in collecting this data.
Evanina, the former counterintelligence officer, told 60 Minutes that Chinese companies are investing in U.S. biotech companies to gain access to the health data. He says most people do not realize that their genetic material represents "your past and your future as well as your children's future."
While there are clearly reasons to be concerned about the influence of the Chinese government and what they might do with your DNA, the reality is most governments with the resources will likely seek to mine DNA as well. This absolutely includes the United States government, military, and private companies.
One such company is the aforementioned 23andMe. In the January 60 Minutes report Anne Wojcicki, CEO of 23andMe, answered questions regarding her company's use of the data they are collecting. While Wojcicki says that her company has "empowered individuals with this opportunity to come together, to crowd source research", she doesn't shy away from acknowledging that her company plans to use the information to develop drugs.
"And I absolutely stand behind: we are going to develop drugs. So that everyone is actually benefiting from the human genome. So absolutely the data is valuable," Wojcicki told 60 Minutes.
While she says she agrees that Americans should be concerned about China's investments in genomic research, she believes the answer is for the United States to invest in genetic programs.
Wojcicki and 23andMe have faced their own criticisms regarding how they use the data and whether the public can truly expect records of their DNA to be safe. In February it was announced 23andMe would become a publicly traded company with help from billionaire Richard Branson. The Guardian noted that Branson's Virgin Acquisition Group said 23andMe and their "vast proprietary dataset" of DNA would allow Virgin to "unlock revenue streams across digital health, therapeutics, and more".

Branson's interest in the study of DNA resembles the interests of wannabe billionaire Jeffrey Epstein. Epstein had an obsession with funding DNA programs. Bill Gates is also a part of this web because of his relationship with Epstein and partnership with the BGI Group. TLAV's Whitney Webb recently reported:
"Epstein donated hundreds of thousands of dollars to the institution and Epstein was also used as a channel for making donations to MIT by billionaire Bill Gates. Gates has yet to explain why he would funnel his donations through Epstein as opposed to publicly donating via his well-known "philanthropic" foundation. Epstein's funding of the MIT Media Lab in particular led to the resignation of its former director Joi Ito in September 2019 following Epstein's arrest and subsequent 'suicide.'"
The DNA-Biosecurity-Big Tech Web
What is not mentioned in the 60 Minutes piece - or anywhere else - is the fact that Anne Wojcicki, CEO of 23andMe, is the sister of Susan Wojcicki, CEO of YouTube.  Additionally, Anne Wojcicki's husband until 2015 was Sergey Brin, one of the founders of Google and president of Google's parent company, Alphabet Inc, until December 2019. Google also owns YouTube.
The reason these connections matter is because there are common threads between Google, the Gates Foundation, companies like 23andMe, and the Chinese government. While Anne Wojcicki and 23andMe work on DNA mining, her sister at YouTube censors reports on such topics that are often labeled misinformation. Understanding the incredible conflicts of interests here is of the utmost importance to where all of this could be going.
Originally published at Activist Post - reposted with permission.