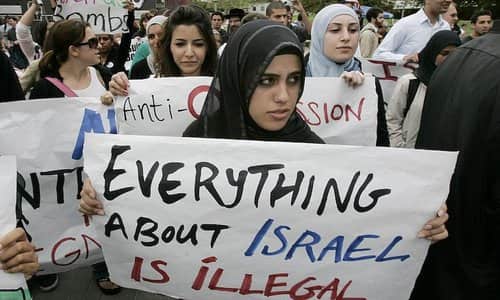 By Daniel Greenfield/JNS.org May 03, 2021
Share this article:
When Airbnb began boycotting the homes of Jews living in those parts of Israel claimed by Islamic terrorists, the Jewish communities of the United States rallied against the dot com.
Sarah Margon, however, stood against the Jewish communities and with the Airbnb boycott.
"Airbnb to remove listings in Israeli settlements of occupied West Bank. Thanks @Airbnb for showing some good leadership here. Other companies should follow suit," she tweeted.
"Airbnb is playing a role by supporting the settlement real estate infrastructure -- they're perpetuating an illegal activity," Margon ranted. "There is no way for a company ... to do business in the settlements without violating the laws of occupation."
That's the woman Biden picked as his assistant secretary of state for democracy, human rights, and labor.
"Yesterday @Airbnb agreed to stop renting in the Israeli-occupied settlements," Margon argued. "Other companies should follow @Airbnb's lead."
BDS will now have a powerful ally within the Biden administration and the State Department.
Margon's hatred for Israel was not surprising. The leftist extremist was heading up the Human Rights Watch office in Washington, D.C. HRW has defended BDS and recently issued a report falsely accusing Israel of apartheid. Airbnb's temporary surrender to BDS was an HRW project.

Sarah Margon was defending an HRW policy. HRW's deputy director for the region had agreed in an interview that it was a crime for Jews to live anywhere in the West Bank. That same HRW official recently argued that the Biden administration should support the "right" to boycott Israel. Margon's appointment will make that much more likely. So much for human rights.
Margon was active on social media "urging companies to pull out of the Israeli Settlements," but her hatred for the Jewish state goes beyond the economic war of BDS in all its forms.
When Peter Beinart put out his infamous "I No Longer Believe in a Jewish State" op-ed, Margon highlighted an excerpt calling for one state and the destruction of Israel.
"Peter Beinart on fire," she cheered.
That's Biden's assistant secretary for human rights supporting the destruction of Israel.
Sarah Michelle Margon is one of a number of anti-Israel activists Biden picked, including Maher Bitar, who was pictured dancing in a keffiyeh in front of a banner reading, "Divest from Israel Apartheid" and is now Biden's senior director for intelligence on the National Security Council, and Hady Amr, who described being "inspired by the Palestinian intifada" and is now Biden's point man on the conflict between Israel and the terrorists fighting to destroy the Jewish state.
Reema Dodin, Biden's deputy White House legislative director, has argued that "suicide bombers were the last resort of a desperate people."

Margon's selection isn't surprising for an administration that appears determined to put a few moderates out front while packing the policy ranks full of anti-American and anti-Israel extremists. At one point Matt Duss, Bernie's foreign policy adviser, an ally of Margon and one of the more infamously anti-Israel figures in the echo chamber was under consideration.
While Margon may not be up there with Duss, whom she's praised and promoted, her attacks on Israel and opposition to Jewish civil rights has been consistent. When she wasn't attacking Israel, she was attacking the idea of protecting Jewish students from her anti-Israel collaborators.
When President Trump signed Executive Order 13899 on Combating Anti-Semitism, Margon complained that it "ostensibly addresses antisemitism. But in reality it's a bogus initiative geared to stifle free speech & go after those who might criticize Israel."
Margon's hatred and hostility for the Jewish state were relentless.
As Hamas supporters rioted at Israel's border fence with the terrorist statelet of Gaza, a New York Times puff piece celebrated one of the rioters, who was "screaming 'Allahu akbar!' and hurling stones."
Sarah Margon tweeted a link to it with the comment, "Extra important read when the new US SecState comes out of the gate noting Israel has a right to defend itself."
When the Obama administration stood against Israel, she tweeted, "Vote affirms illegality of settlements, longstanding US policy. Thank you @POTUS."
Margon repeatedly complained that the United States was providing Israel with military equipment and falsely accused it of "exploiting COVID-19 & using it as a pretext for repression."
"Such brutality & injustice rarely so stark," she tweeted about a piece smearing Israel over casualties in Gaza.
After HRW, Margon joined one of George Soros' Open Society Foundations as its director of foreign policy advocacy. The OSFs fund BDS groups and Soros, its backer, has blamed antisemitism on Jews and the "pro-Israel lobby." "If we change that direction, then anti-Semitism also will diminish," the extremist anti-Israel billionaire has argued.

A snapshot of Margon's activism can be seen in her Twitter feed, which shows her promoting attacks on Israel by HRW's Abier Almasri, who has defended terrorists. In one article promoted by Margon, Almasri described "three military assaults Israel has launched during its armed conflicts with the Hamas-led Gaza authority since 2008." Not Hamas terrorists--authority.
"Starting our day off right - visit to @RashidaTlaib," Margon tweeted in 2019 about accompanying Almasri to the militantly anti-Israel and pro-terrorist House member.
Included in the tweet was Omar Shakir,an HRW BDS activist on whose behalf Margon had campaigned when Israel told him to leave. "Where is the US on the ouster of my colleague @OmarSShakir from Israel? Virtually silent, just like on the Israeli security forces' disproportionate attacks on Palestinians in Gaza," Margon complained in 2018.
But it wasn't just the Islamic jihadis trying to murder Jews who animated Margon's activism.
When President Trump took out the head of Islamic State and said, "he died like a dog," Margon whined about his "aggressive language," which she said "can easily be used to recruit & radicalize."
"US is illegally transferring foreign ISIS suspects from Syria to Iraq, leading to botched trials & torture," another tweet complained.
All of this will have severe consequences for American soldiers, who have come under fire from Margon before.
When Air Force pilots bombed an Afghan hospital that Taliban fighters had been using, Margon wrote a letter to Obama's Secretary of Defense on behalf of HRW demanding a "criminal investigation" and the "possible criminal liability of US personnel."
Our men and women in uniform, like the Israelis, have to watch out.
The Biden administration is coming for them.
Originally published at JNS.org - reposted with permission.