All Eyes On Israel As Jerusalem Becomes A Cup Of Trembling 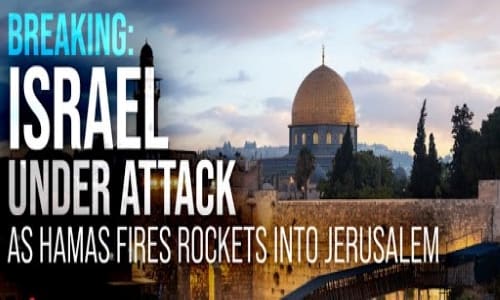 By Sharon Wrobel/Algemeiner.com May 11, 2021
Share this article:
Israel's annual Jerusalem Day was overshadowed Monday by rocket sirens and explosions as Hamas claimed responsibility for striking the country's capital and targets across the south, while the Israel Defense Forces (IDF) said it bombed a number of the terrorist group's positions in the Gaza Strip in response.
By Monday night over 150 rockets had been launched from the Gaza Strip into Israeli territory, at least dozens of which have been intercepted by Israel, according to the IDF.
The rocket barrage towards Jerusalem and surrounding areas started just a few minutes following the expiration of an "ultimatum" by Hamas, which called for the withdrawal by the Israeli police from several areas in eastern Jerusalem and for freeing Palestinian prisoners.
Marchers who participated in the Jerusalem Day flag parade were forced to run for cover and continued the celebration shortly after.

According to the IDF, a barrage of rockets was also being fired toward southern Israel. The IDF said that it had detected seven rockets launched from the Gaza Strip at the Jerusalem area, at least one of which was intercepted by the Iron Dome missile defense system.
In response, the IDF said it attacked a number of Hamas targets, including two rocket launchers, two military positions and eight of the terrorist group's operatives.
The Magen David Adom rescue service said Monday night it had treated 10 people for injuries resulting from missile attacks, in most cases for shock, and another 15 people for light injuries resulting from stone-throwing attacks.
Speaking at at the Jerusalem Day ceremony held at Ammunition Hill, Prime Minister Benjamin Netanyahu said, "We are in a struggle that is spreading across several fronts: in Jerusalem, in Gaza and elsewhere in the country. The terrorist organizations in Gaza crossed a red line on Jerusalem Day evening and attacked us with missiles at the entrances to Jerusalem."
"Israel will respond forcefully. We will not tolerate attacks on our territory, our capital, our citizens and our soldiers. Whoever attacks us will pay a heavy price," Netanyahu continued. "The current conflict may continue for some time."
Also at the ceremony, President Reuven Rivlin said that the "wail of the sirens in Jerusalem a short time ago is still with us. Repeated code red alarms that disrupt normal daily lives in the south, right now too, are putting our dear ones in the south of the country, the Gaza envelope that envelopes our whole country, into their safe rooms."

"We will not be bowed in the face of any threat. Let nobody challenge the lethal might of our forces. Do not put them to the test," Rivlin added.
Hamas said it fired rockets towards Jerusalem in response to Israeli "crimes and aggression in the Holy City, and its harassment of our people in Sheikh Jarrah and Al-Aqsa Mosque."
According to reports, a rocket fired from the Gaza Strip hit a house in the Judean hills. The IDF reported that an anti-tank missile was fired from Gaza toward Israel. As a result, an Israeli civilian in a nearby vehicle was lightly injured and evacuated to a hospital for further medical treatment.
According to Walla News, Israel's security cabinet gave the IDF a green light to hit targets throughout the Gaza Strip following the attacks.
"In the next few days, Hamas will feel the long arm of the [Israeli] army. It won't take a few minutes, it will take a few days," IDF Spokesperson Hidai Zilberman said.
"In Palestinian terrorism, an iron fist must be fought. Anyone who puts Israeli residents in shelters should know that he will regret it," said Israel's Defense Minister Naftali Bennett on Monday. "The Israeli government will take determined action."
"No country can allow its citizens to live under the threat of terrorism," said leader of the Israeli opposition Yair Lapid. "Israel must act resolutely and forcefully and restore deterrence in the war against the enemies of Israel."
Jerusalem has been the site of a number of days of violence as Palestinians clashed with Israeli police forces across the capital and around the Temple Mount ahead of the annual Jerusalem Day to celebrate the reunification of the city after the 1967 Six-Day War.

This year the march coincides with the Muslim holy month of Ramadan. Violence had also erupted in recent days in response to the tension around the Sheikh Jarrah neighborhood of eastern Jerusalem, where a number of Palestinian families are set to be evicted in an ongoing court case.
The White House on Monday expressed "serious concerns" about the clashes in eastern Jerusalem, with White House press secretary Jen Psaki telling reporters during a press briefing, "We are continuing to closely monitor the violence in Israel. We have serious concerns about the situation, including violent confrontations that we've seen over the last few days."
Before a Monday meeting with Jordanian Foreign Minister Ayman Safadi, US Secretary of State Antony Blinken called on "all sides" to "de-escalate, reduce tension and take practical steps to calm things down."
"We are very deeply concerned about the rocket attacks that we are seeing now that need to stop and need to stop immediately," he said."
Originally published at Algemeiner.com - reposted with permission.