Transgenderism: All Of These Minor Changes Amount To A Cultural Sea Change 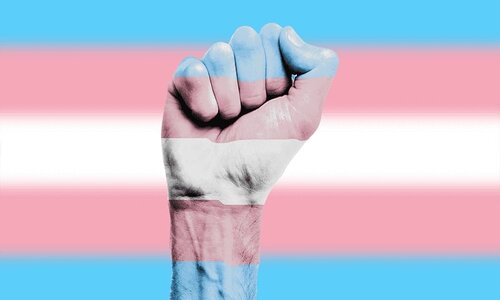 By Jonathon Van Maren/Bridgehead.ca May 20, 2021
Share this article:
I noticed the other day that one of the LGBT activists who enjoys chronicling my columns wrote another piece saying that I am a fearmonger. Specifically, I am a fearmonger because I have spent several years chronicling the myriad ways in which the gender ideologues have embarked on the total eradication of biological sex and the transformation of our society.
Sure, I get that in the grand scheme of things a cereal company launching a Pride Month Kellogg's box telling kids to pick their pronouns ("they/them" being a grammatically confusing option) is minor, but the reality is that all of these minor changes amount to a cultural sea change that has been surging up the beach, inch by inch.
To illustrate this point, let's survey just a few recent stories.
Reuters noted on May 17 that the French Rugby Federation (FFR) will be permitting biological men ("transgender women") to play in the women's rugby league next season. This is after the governing body, World Rugby, issued guidelines last year after "months of research" stating that it had "concluded that safety and fairness cannot presently be assured for women competing against trans women in contact rugby." FFR stated that they will instead implement a testosterone threshold that will in fact allow those still "transitioning" to play. FFR's board voted unanimously on this decision.

In a statement that might leave readers wondering what the point of having a league specifically for women might be, FFR vice president Serge Simon stated that: "Rugby is an inclusive, sharing sport, without distinction of sex, gender, origin, or religion." One would think a women's league would be exclusive to women, but there you have it.
Also on May 17, Mississauga.com reported that the Peel District School Board in Ontario, Canada, will be flying the Transgender Flag -- because the rainbow is now passé. In a release the board stated: "The international Day Against Homophobia, Transphobia and Biphobia is an opportunity for PDSB students and staff to acknowledge and reflect on violence and discrimination experienced by 2SLGBTQ+ communities." The kids are presumably being faithfully taught the ever-expanding categories which those acronyms represent, as well as their potential for membership in each.
On May 16, there was this, from NPR: "Rev. Megan Rohrer has been elected as the first openly transgender bishop within the Evangelical Lutheran Church in America. They will lead some 200 congregations in California and Nevada." It appears we've cruised right on past the debate about female ordination and are on to a debate about the ordination of men in drag who demand that they be referred to as "they." Ten years ago, it would not have been possible to write a parody of mainstream Protestantism as cruel as the reality currently unfolding at faux synods across the West.

Google Docs will now make more "inclusive" suggestions and edits in its predictive text algorithm. The technology will now correct gendered words such as "mailman" to "mail carrier," or "chairman" to "chairperson."
On May 18, Google held its virtual I/O developer conference. The Daily Mail reported that the new update to Google Doc will suggest ways to avoid "offensive language" and gendered language.
The push for more "inclusive" gender language goes beyond the scope of big tech. Colleges and educational institutions are also modifying language in the name of inclusivity. At Penn State University, the faculty senate passed a resolution that rid the university of alleged paternalistic labels such as "freshmen," "junior," "senior," "upperclassmen," and "underclassmen."
University faculty claim that gendered language comes from living in a male-dominated society, and that terms such as "junior" and "senior" "are parallel to western male father-son naming conventions, and much of our written documentation uses he/she pronouns."
According to the Mail, a train operator with the London North Eastern Railway has been rebuked after a "non-binary passenger who goes by the Twitter name Laurence and uses the pronouns they them" complained that the conductor had used an offensive greeting. Apparently, he had welcomed commuters by saying: "Good afternoon ladies and gentlemen, boys and girls." Laurence, livid, promptly tweeted at London North Eastern Railway to complain about this: "As a non binary person this announcement doesn't actually apply to me so I won't listen @LNR."
While that might seem to be Laurence's problem, the Railway hastened to respond. "I'm really sorry to see this, Laurence," they tweeted back, "our Train Managers should not be using language like this, and I thank you for bringing it to my attention. Please could you let me know which service you are on and I will ensure they remain as inclusive as we strive to be at LNER."
Just so you're staying with me, the unacceptable language being referred to here was, again: "Good afternoon ladies and gentlemen, boys and girls."

This sort of language, however, apparently does not just target Laurence. As the Mail noted: "A colleague who was with Laurence at the time and is also believed to be a rail worker defended the complaint. Jarley wrote: 'Both Laurence and I were customers of the railway -- being rail staff does not absolve an operator from the duty of care or responsibility to be inclusive. I was sat with Laurence when this tweet was sent. Both of us are non-binary and we were both alarmed and uncomfortable by the lack of inclusion.'"
Both of the non-binary folx, apparently, were railway employees, but announced they would not be following orders due to the lack of inclusivity. Conservative MP Mark Jenkinson denounced the apology, noting, "You'd be forgiven for thinking this Train manager had unleashed a tirade of abuse ... Identify however you like, but can we stop this nonsense?" Paul Embery, a writer with Unherd, chimed in: "Utterly ridiculous. Do you have any idea how this kind of thing come across to ordinary people?"
I suspect Laurence and Jarley don't care. These complaints are weaponized whining designed to trigger an apology, which functions as a warning to those who find all of this ridiculous. The conductor was not disciplined -- this time -- but the message sent by the non-binary train-riders was crystal clear: Accommodate, or else!
Of course, short of simply using generalities -- "welcome, everyone" -- there isn't any way to accommodate a movement that is racing full-tilt ahead, firmly clutching the goalposts. There are now dozens of genders and dozens of pronouns. Conductors cannot welcome Zees and Zirs; I suspect not even trans activists can conjugate more than a handful of these fictitious formulations. And so, instead, conductors and everyone else will just have to dispense with the pleasantries altogether. A victory, I'm sure you'll agree, for everyone.
And lastly we have pop singer Demi Lovato who after previously coming out as "queer," and then pansexual, announced today that she is now non-binary and will be using they/them pronouns from this point forward, or at least until a trendier option presents itself. The mainstream media has been all over this breaking news with wonderful praise for this accomplishment.
Language matters. We cannot have a society without it. Truth matters. We cannot have a society worth living in without it. We are witnessing an attack on both language and truth, and thus on society. And we are going to need to muster the backbone to oppose it.
It is true that there has been some state-level pushback to all of this as well as some encouraging signs that high tide may have been reached in the United Kingdom and Sweden, but here in America, President Joe Biden, who identifies as Catholic (you can identify as anything you like these days) assured the trans movement in his first joint address to Congress in late April that he is there for them. "To all transgender Americans watching at home," he warbled, "especially the young people. You're so brave. I want you to know your president has your back."
Originally published at The Bridgehead - reposted with permission.