Europe's Anti-Israel Protests Do Not Bode Well For Future Conflicts 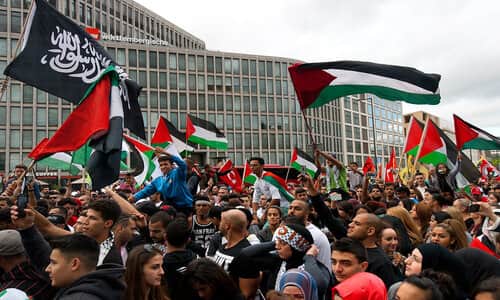 By Soeren Kern/Gatestone Institute May 22, 2021
Share this article:
Pro-Palestinian demonstrations in cities across Europe have descended into unrestrained orgies of anti-Semitism after protesters opposed to Israeli military action in the Gaza Strip openly called for the destruction of Israel and death to Jews.
The protesters, numbering in the tens-to-the-hundreds of thousands, include a hodgepodge of anarchists, hard-left anti-Israel activists and immigrants from the Middle East and North Africa. Many demonstrators -- carrying flags of Muslim countries, including Algeria, Iran, Iraq, Lebanon, Tunisia, Turkey and Syria, as well as the green flag of the Islamist terrorist group Hamas and the black flag of global Jihad -- have shouted Islamist chants such as 'Allahu Akhbar' ('Allah is the Greatest'), and have openly called for Jews to be murdered or raped.
The anti-Semitic nature of the anti-Israel protests is further evidenced by there having been no anti-China protests, despite overwhelming evidence that massive human rights abuses are being carried out by the Chinese Communist Party against millions of Uyghur Muslims in Xinjiang.
Pro-Palestinian protesters, who also have been silent about the plight of Muslims in Afghanistan, Iran, Syria or Yemen, among other places, clearly are exercising selective outrage with their single-minded concern for Muslim human rights in Gaza.
The spiraling anti-Semitism, and the apparent inability or unwillingness of European governments to stop it, has sounded alarm bells among Jewish communities in Europe, where anti-Jewish hatred is reaching levels not seen since the Second World War.
The violence has also shed renewed light on the consequences of mass migration to Europe from Africa, Asia and the Middle East, and especially on the failure of governments to require newcomers to integrate into European society.
Some European lawmakers and security officials are now calling for migrants who commit anti-Semitic hate crimes to be deported back to their countries of origin. Given the iron grip of political correctness in Europe, this is unlikely to happen.
In any event, it may be too little, too late for Europe's Jewish communities. The current crisis of anti-Semitism is a testament to the failure of European multiculturalism, which is making Jewish life in Europe increasingly unviable.

United Kingdom
In London, a motorcade of cars with Palestinian flags drove past a Jewish community center on Finchley Road. A man, using a megaphone, shouted: "F*ck the Jews, f*ck their daughters, f*ck their mothers, rape their daughters and free Palestine."
At the same time, an estimated 100,000 people gathered in downtown London, where many chanted, "From the river to the sea, Palestine will be free." One protester was filmed tearing apart an Israeli flag after he was unable to light it on fire because it was raining. An on-duty uniformed female police officer joined the protesters and shouted, "Free, free Palestine!"
Later, dozens of members of Hizb ut-Tahrir, an Islamist movement dedicated to establishing an Islamic caliphate, waved the black flag of Islamic Jihad and held signs calling for "Muslim Armies" to "liberate" Jerusalem. A large banner stated: "Whole of Palestine is occupied and all of it must be liberated." One protester openly called for jihad:
"This goes out to the Muslim armies. What are you waiting for? Jihad is your responsibility. Wipe out the Zionist entity. How dare they occupy Muslim lands. How dare they. Have you no honor? We, the Muslims in the West, are with you. We don't fear anyone but Allah."
In Manchester, a mob carrying Palestinian flags gathered in front a bagel shop at Arndale Center, a large shopping mall, where the crowd appeared to be targeting Jewish shoppers.
As in Germany, politicians in Britain have condemned the anti-Semitism, but few appear to know how to stop it from spreading.
British Prime Minister Boris Johnson tweeted:
"There is no place for antisemitism in our society. Ahead of Shavuot [a Jewish holiday], I stand with Britain's Jews who should not have to endure the type of shameful racism we have seen today."
Conservative MP Christian Wakeford said:
"As the Member with the largest Jewish community outside of London, I have been contacted by constituents scared to take their children to synagogue due to the appalling scenes on the streets of the UK over the weekend."
MP Robert Jenrick added:
"As the father of Jewish children it shocks me every time I take my children to synagogue or to their nursery to see individuals stood there in stab proof vests guarding the entrance to those places."