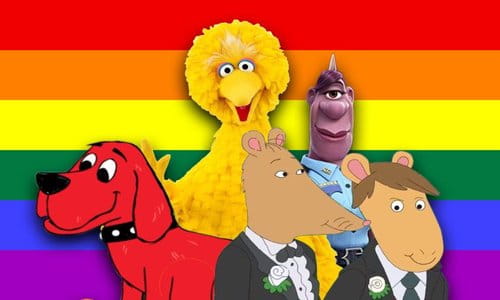 By PNW Staff May 31, 2021
Share this article:
If you think your kids are not coming under the influence of LGBT indoctrination - think again.   While most of us have grown up on cartoons that were mindless entertainment, many still tried to communicate certain lessons or moral messages.
Unfortunately, the leftist worldview of Hollywood is the prevalent ideology of the day and they are not shy about promoting the celebration of the gay and transgender lifestyle in children's cartoons.  In fact you will be hard pressed to find one that is not currently doing so.
Some of the latest kids shows to join the bandwagon are a reboot of Rugrats which will reimagine one of the characters as an openly lesbian single mother who makes jokes about her former ex-girlfriends and the very popular "Blue's Clues & You," which is a Nick Jr. cartoon for young children, recently featured an LGBT pride parade with non-binary animals and a cartoon drag queen to celebrate Pride Month.

The parade features a cartoon version of Nina West, which is the the drag name of Andrew Levitt, who narrates as float after float of LGBT animals passes by. First is a lesbian gator family, followed by a gay bear family; after them come non-binary dolphins, transgender beavers, as well various other asexual, bisexual, and pansexual animals.
"Love is love is love, you see, and everyone should love proudly and we'll all go marching in the big parade!" the drag queen sings.
Some other popular cartoon that have already gone "woke" on progressive LGBT values is PBS popular "Clifford" program.  The big red dog reboot is introducing a character on its show with lesbian parents.
Clifford is following in the footsteps of the popular PBS kids program, "Arthur".  This show has has a staple of kids viewing habits for over 20 years but it didn't take long for writers to give into the LGBT agenda. In an episode last year titled "Mr. Ratburn and the Special Someone," the show depicts the marriage of elementary-school teacher Mr. Ratburn, a long-time recurring character, to another man.
One Million Moms was quick to condemn the recent Clifford move saying,  "Discussion of such controversial topics and lifestyle choices should be left up to parents," 1MM declares. "PBS KIDS should not introduce the LGBTQ lifestyle to young children. PBS KIDS should stick to entertaining and providing family friendly programming, instead of pushing an agenda."
Once the more mainstream children's programs start to promote such episodes, we can expect the floodgates of a large number of kids tv programming to have some kind of similar message that includes painting any parent who would oppose such wonderful events as full of hate.

Other popular children's shows to fall in line include "My Little Pony" with it's episode of "My Little Pony: Friendship is Magic" which introduces Aunt Holiday and Auntie Lofty - a lesbian couple and guardians of Scootaloo and the iconic "Sesame Street" will soon have Billy Porter, a cross-dressing homosexual entertainer as it's guest host.
The Cartoon Network was the first out of the gate two years ago when it featured a children's show which had a same-sex wedding proposal. The proposal was between female characters named Sapphire and Ruby in the show Steven's Universe.
Cartoon Network's "Adventure Time" series aired a scene in its series finale last year that showed two female characters kissing each other on the lips.
On its website, Cartoon Network previously celebrating pride month by promoting its Steven Universe "made of love" collection. The collection includes LGBT-themed apparel and memorabilia which include listings for "Steven Universe" LGBT-pride pins, a "Steven Universe" rainbow-themed "made of love" patch and even a "Steven Universe" "kissing tote bag."
The website also sells a "Steven Universe" "reunited" throw pillow and T-shirt. The tote bag, shirt, and throw pillow all feature the same decal of the two female characters kissing.
"Love is in the air! This multicolored pillow celebrates the Ruby and Sapphire on their wedding day," the listing reads. "Double sided, this pillow features the happy couple at the altar on both sides."
Nickelodeon has also featured a same-sex couple on its Loud House cartoon series. And Hulu announced more than a dozen new episodes of its series The Bravest Knight, which features two "gay" men raising a young girl as their daughter.

In a press release Hulu applauded itself with the observation that The Brave Knight is "breaking boundaries" by "featuring a household with two dads (Sir Cedric and Prince Andrew), making it one of the first children's television series with an openly gay main character."
The announcement added that "The Bravest Knight continues Hulu's commitment to connecting with kids and families through bold approaches in storytelling, and continues to be a supporter of LGBTQ content and creators."
In addition to the typical celebration of gay weddings and characters we also now have the promotion of drag queens.  Toddler drag queens at that... with the show "Drag Tots".  These simplistically drawn toddlers who are, somehow, already living as drag queens explore facets of the drag queen lifestyle. They do this with the help of a cartoon unicorn voiced by transgender celebrity RuPaul.
These "drag queen themed adventures" are placed in an educational context for the viewers along the lines of The Magic School Bus children's book and cartoon series with the tagline, "School has never been so fierce!" as an obvious attempt to indoctrinate children to believe that the drag queen life style is both common and normal.
The show features several prominent drag queens as the voices of the characters and the trailer ends with a chorus of children merrily singing the new jingle, "Drag, drag, drag, drag, drag tots! Yeah!" that just rolls off the tongue.
Disney will also be breaking new ground soon with it's revamping of  "The Proud Family," a 20-year-old cartoon sitcom about an African American family, and will be featuring a cast that includes two interracial gay dads whose adopted daughter is a teenage racial activist promoting such causes as BLM.
A Common Sense Media study found that 75 percent of American kids aged 8 and under have access to a "smart" mobile device, and the American Pediatric Association has asserted that "the average 8-year-old spends eight hours a day -- 56 hours per week -- using electronic media such as laptops, tablets, and smartphones."
The burgeoning kids content on-demand streaming market makes it more important than ever before that parents monitor what their kids are exposed to.
Here is the latest Pride Parade propaganda from Blues Clues: