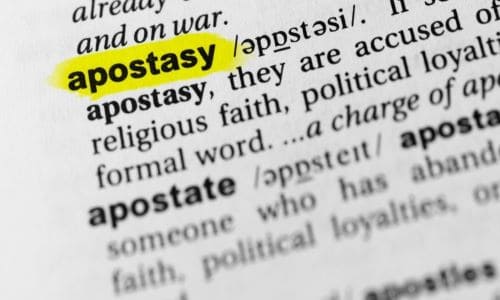 By PNW Staff June 02, 2021
Share this article:
The Evangelical Lutheran Church in America (ELCA) has taken more steps in it's rapid decline into apostasy as it appointed the denominations first transgender bishop.
Megan Rohrer was elected on 8 May to lead the Sierra Pacific Synod of what is the largest Lutheran institution in the United States with 3.3 million baptized members and over 8,900 local congregations.
The newly elected bishop will oversee around 200 local congregations in Northern California and Northern Nevada in the next six years, starting in July.
It was also announced that the bishop-elect should be addressed with the pronouns "they/their".

Rohr was the first transgender person to be ordained by the ELCA in 2006 and now makes "history", the pro-LGBT group Extraordinary Lutheran Ministries said. "We anticipate the day when all queer ministry leaders will be called to ministry settings without hindrance or barrier and will be affirmed in their God-given calls".
According to this group, there are over 390 queer ministers in the ELCA at this point.
The ELCA is known for its strong theological shift in the last 15 years towards an "inclusive" theology, except when it comes to Israel.
Last year the Danish Bible Society, which is run by the Evangelical Lutheran Church, came under heavy fire for the Danish "translation" of the Bible that virtually wipes out "Israel" from the New Testament.
In the Greek New Testament, the word "Israel" occurs more than 60 times, however it is found only once in the new Danish version called Bibelen 2020. That's right, just once. And that one occurrence is a direct quote from an Old Testament verse. Otherwise, "Israel" is gone.
The reason for this the society argues is that Christian readers must not connect "Israel" in the New Testament with the nation of Israel today.  The ELCA has long promoted the idea of "replacement theology", also called supersessionism, which essentially teaches that the church has replaced Israel in God's plan. Adherents of replacement theology believe the Jews are no longer God's chosen people, and God does not have specific future plans for the nation of Israel.

The presiding "bishop" of the Evangelical Lutheran Church of America, The Rev. Elizabeth Eaton, has also expressed her belief that although Hell may exist, it is entirely empty because "God doesn't give up on those who reject Him."
Two years ago, over 30,000 ELCA teenagers attended the ELCA's national youth gathering.  Popular ELCA pastor Nadia Bolz-Webber ((who loves to swear during her sermons and tells her congregants that their is nothing wrong with porn) led the students to say after her "I renounce the lie that queerness is anything other than beauty".
At the youth gathering an 11-year-old boy who thinks he is a girl was put on stage to promote transgenderism.
This past summer the ELCA in convention passed an interfaith resolution stating that we do not know what God thinks of non-Christian religions.  A delegate got to the microphone to offer an amendment, saying that we do know because John 14:6 says that Jesus is the only way of salvation.  His amendment was voted down by 97 percent.

Now the church is raising red flags with it's promotion of praying by addressing God as "Mother" instead of Father on it's official Facebook page as well as via Twitter:
"Mother God, you have fed us with the nourishment of your spiritual food. Raise us up into salvation and rid us of our bitterness, so that we may share the sweetness of your holy word with all the world," the ELCA tweeted as part of their #Bread4theday series of Twitter posts.
The tweet has gotten a fair amount of negative attention. Hans Fiene, a conservative pastor who oversees the popular Lutheran Satire YouTube channel, responded with a simple message to people who still value Biblical literacy:
"Leave the ELCA," he succinctly replied when retweeting the ELCA post.
Thankfully many have headed his call.  The ELCA had over five million members when it was first launched in 1988. It has only declined since, and the decline has been accelerating as it continues to adopt many unbiblical practices.
If current trends continue the denomination will have fewer than 67,000 members in 2050, and fewer than 16,000 in worship on an average Sunday by 2041.
That's right -  this church will basically cease to exist within the next generation and to that we say "Amen" as the scriptures warn against such people; "having a form of godliness, but denying the power thereof: from such turn away....ever learning, and never able to come to the knowledge of the truth"  2 Timothy 3:5-7