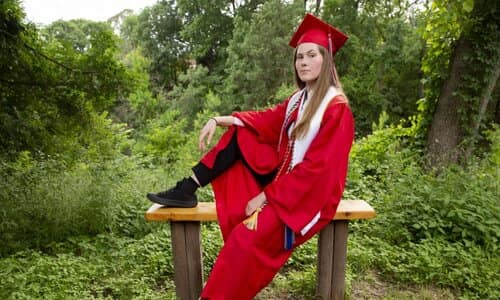 By Jonathon Van Maren/Bridgehead.ca June 09, 2021
Share this article:
Feminism in 2021 is a simple proposition: Feticide is essential for females to have a future.
Michelle Williams openly credited her abortion for enabling her Hollywood career when she won a Golden Globe. Without being able to kill a baby in the womb, the logic goes, that baby will likely make it out of the womb -- and little boys and little girls are notorious for interfering with prior plans. Any suggestion that baby-making activities be curtailed or carefully regulated, of course, is scoffed at. We can change the climate and end racism, maybe, but guys and girls certainly can't keep their clothes on.
This is the basic thesis of a viral valedictorian speech by Paxton Smith, a graduate of the Lake Highlands High School in Dallas, Texas. As she spoke to her class and the gathered crowd, she swapped out her approved speech for an impassioned plea for abortion in the wake of Texas's new heartbeat bill.

Abortion activists and celebrities promptly fell all over themselves to fawn on the young woman, who was able to articulate so effectively the message they have been selling to teenage girls just like her for so long.  She was lauded as a courageous young woman by the likes of Hillary Clinton, and publications from The Guardian to the CBC have been eager to cover the speech and interview Smith. She's got a political career if she wants one.
Imagine if a pro-life student went off script and described the barbarism that takes place during the abortion procedure, the New York Times and Vox and the rest of the wolves would be tearing apart her social media looking for indiscretions or posts that could be misconstrued as such. It would take genuine bravery for a student to take the anti-abortion position, which would either attract massive ire or simply fail to go viral in the first place.
The speech itself, of course, was only coherent if one completely ignores what is actually at stake in the abortion debate -- or, for that matter, what abortion actually is in the first place. Let's break it down:
Recently the heartbeat bill was passed in Texas. Starting in September, there will be a ban on abortions that take place after 6 weeks of pregnancy, regardless of whether the pregnancy was a result of rape or incest. 6 weeks. Most women don't even realize they're pregnant by then.
And so, before they have the time to decide if they are emotionally, physically, and financially stable enough to carry out a full-term pregnancy, before they have the chance to decide if they can take on the responsibility of bringing another human into the world, the decision has been made for them by a stranger. A decision that will affect the rest of their lives.

By a "full-term pregnancy," what she actually means is a child ("another human," as she put it just a few words later). For those who still cling to a time in the distant past when we were unaware of what takes place in the womb during pregnancy, I refer you to the Endowment for Human Development, National Geographic's Inside the Womb, or any pregnancy app you can find on your phone. Abortion supporters like to refer to a "pregnancy" without referring to the fetus or baby because it avoids the point pro-lifers are making: That it is an act of violence to kill that developing human being.
I have dreams, hopes, and ambitions. Every girl here does. We have spent our whole lives working towards our futures, and without our consent or input, our control over our futures has been stripped away from us. I am terrified that if my contraceptives fail me, that if I'm raped, then my hopes and efforts and dreams for myself will no longer be relevant. I hope you can feel how gut-wrenching it is, how dehumanizing it is, to have the autonomy over your own body taken from you.
What is truly gut-wrenching about that paragraph is the lie that our generation has been sold: that dreams, hopes, and ambitions are incompatible with children -- with your children. An abortion kills your son or daughter, not somebody else's. Control over our futures does not mean control over whether or not our children live or die. And again -- there are more ways to control your future than to have the "right" to extinguish a developing life if that child were to inconveniently come into being.

Progressives and abortion activists have successfully presented our culture with a binary option: Either we have abortion, or we have legions of miserable, trapped parents who might be happy if they'd been able to get rid of their kids before they were born. Smith obviously believes this lie 100%; her passion appeared genuine. That in itself is a tragedy. More:
And I'm talking about this today, on a day as important as this, on a day honoring the students' efforts in twelve years of schooling, on a day where we're all brought together, on a day where you will be the most inclined to hear a voice like mine, a woman's voice, to tell you that this is a problem. A problem that can't wait. I refuse to give up this platform to promote complacency and peace, when there is a war on my body and a war on my rights. A war on the rights of your sisters, a war on the rights of your mothers, a war on the rights of your daughters. We cannot stay silent.
The war is not on women's bodies. Abortion targets and destroys the bodies of other people, of children. For those who doubt this, take a look at Live Action's brilliant but brutal series of videos detailing the different types of abortion procedures. This is what abortion actually is, to understand that is to recognize that as powerful as many might find pro-abortion rhetoric, it is an exercise in avoiding the point.
We do not have the right to kill children in the womb -- not even for our dreams, our hopes, and our ambitions. Our children are worth more.
Originally published at The Bridgehead - reposted with permission.