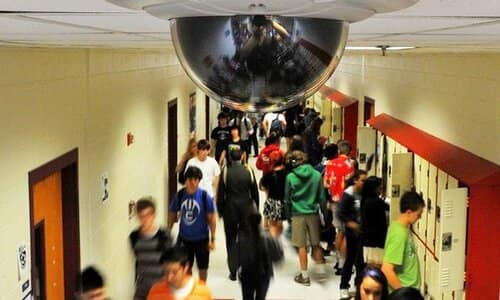 By Activist Post June 10, 2021
Share this article:
How does a school committee respond to a year of remote student learning? How will the Springfield, MA School Committee respond to post-COVID schooling?
Now that public schools are reopening (just in time for summer vacation) what are officials worried about? Is it face-to-face learning? Is it in-person interactions with students? Nope, it is mass surveillance and how to let Real-Time Crime Centers (RTCC) monitor students under the guise of public safety.
As MassLive reports, the decision to let the Springfield Police Department monitor students in real-time "feels tone deaf."
The school committee took a half hour to decide that the best way to make students and faculty feel safe is to allow Big Brother to monitor them in real-time.

It is becoming more apparent to even casual observers, that our public schools resemble our prison system. Our schools are increasingly tied to the school-to-prison pipeline with CCTV cameras watching a students' every movement; to weapons detectors at entrances, to vape detectors in bathrooms, and to police officers waiting for students to commit an infraction.
Will tying school surveillance cameras to RTCCs be the proverbial straw that broke the camel's back?
The Springfield Police Department's Real-Time Analysis Center (R-TAC) uses BriefCam's surveillance technology to monitor the public and students. As the video explains, the police use BriefCam's license plate readers to ID and track innocent motorists without a warrant. BriefCam is also well-known for its facial recognition capabilities.
"Users can rapidly pinpoint people of interest, create scalable watchlist management and powerful rule configuration for real-time alerts in critical, time-sensitive situations using external image sources, digital images extracted from video, and pre-defined watchlists. The ability to detect, track, extract, classify, catalog and alert on persons-of-interest appearing in video surveillance footage in real-time."
Is it a coincidence that police department RTCCs are closely linked to Fusion Centers?
As EFF's "Atlas of Surveillance" points out, RTCC's are part of Homeland Security's 79 Fusion Center national network.
"Technologies such as networked cameras, automated license plate readers, and gunshot detection are deployed around the clock, as are the tools to process this data, such as predictive policing software and AI-enhanced video analytics."

"The technologies, working in concert, are being consolidated and fed into physical locations called Real Time Crime Centers. These high-tech hubs, filled with walls of TV monitors and computer workstations for sworn officers and civilian analysts, not only exploit huge amounts of data, but also are used to justify an increase in surveillance technology through new data-driven or intelligence-led policing strategies."
The new proposal allows Springfield's RTCC to log into the school's surveillance system without a warrant.
"Under the proposal, police personnel at the R-TAC would be able to log onto the school system and view footage immediately. Walsh said the proposal includes strict guidelines -- limiting such use of the system to emergency situations, and limiting access to analysis center staff and a group of detectives and supervisors. Police will be required to log each time they access the system, documenting who signed in and why."
The Springfield police cannot wait to use BriefCam to monitor students.
"There's a lot more it can do. It's a phenomenal tool," said William Schwarz, director of the Springfield Police Crime Analysis Unit, which oversees the R-TAC."
As school committee member LaTonia Monroe Naylor warned, "the policy has too many gray areas that need clarification."
What constitutes an emergency situation? "It doesn't have to be a 911 call," Naylor said. Is it an emergency if someone is in a school with a gun? Is a fight in a hallway an emergency? What about someone on school grounds selling drugs?  "What we call surveillance, they call an 'emergency situation," she said.
Originally published at Activist Post - reposted with permission.