What The West Can Learn From China's War On India 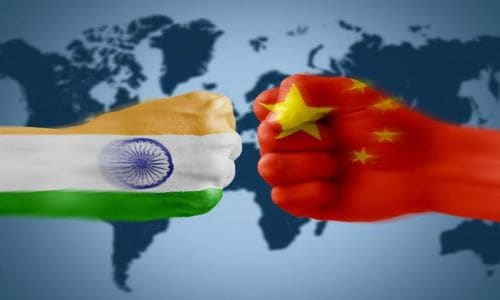 By Judith Bergman/Gatestone Institute June 18, 2021
Share this article:
One year after China ordered an attack on the disputed border between India and China in the Himalayas -- which deteriorated into a situation in which 20 Indian soldiers and several Chinese soldiers were killed -- tension along the border remains high.
"China's occupation since May 2020 of contested border areas is the most serious escalation in decades and led to the first lethal border clash between the two countries since 1975," according to the "2021 Annual Threat Assessment of the U.S. Intelligence Community," published on April 9, 2021 by the Office of the Director of National Intelligence.
Military tensions between China and India go back nearly six decades to the 1962 Sino-Indian war, when China began attacking India. Although relations subsequently improved, the shadow of the war remains partly in the form of disagreement between the two countries about where the exact border -- or the Line of Actual Control (LAC), as it is called -- is located.

In January, China reportedly withdrew nearly 10,000 soldiers from depth areas on its side of the LAC while keeping front-line soldiers in place. Despite 11 rounds of talks -- the latest on April 9 -- de-escalation remains elusive. China refuses to disengage from two friction points in Hot Springs and Gogra.
In May, Indian Army Chief General MM Naravane told Indian troops to keep a watch on Chinese activities along the LAC. China's People's Liberation Army (PLA) has reportedly begun annual war drills in "in-depth areas... located 100 to 250-km from the Line of Actual Control (LAC)."
China's border actions against India have been described as a "salami tactic". China seems to be seeking to dominate territory through incremental operations too small to attract international attention and not large enough to spark an actual war with India -- but sufficient to accumulate real results over time in the form of gained territory. It is similar to the tactic China has been using in the South China Sea.
China, in its apparent ambition to become the world's dominant power, seems intent on bullying neighboring India into submission in areas where the two countries disagree. For this purpose, China uses gray-zone warfare, a maneuver at which the country has become expert, especially against Taiwan. The concept entails actions that fall just short of war -- others have termed it "indirect war" -- but the purpose is the same: to overcome resistance -- or a perceived enemy -- by inducing exhaustion.
"The indirect-war elements are conspicuous in China's actions against India," wrote Brahma Chellaney, author of Water, Peace, and War, recently in Foreign Affairs.
"China has steadily brought Indian security under pressure through unconventional instruments, including cyberattacks, its reengineering of the cross-border flows of rivers, and its nibbling away at disputed Himalayan territories. It seeks to employ all available means short of open war to curtail Indian ambitions and strike at core Indian interests."
India is one of the world's most cyber-attacked countries and China is one of its primary attackers. Last June, for instance, the border clash between Chinese and Indian military forces reportedly resulted in a 200% increase in cyber-attacks from China, with hackers targeting ministries, media organizations and large businesses. June 2020, according to Brahma Chellaney, "saw at least 40,300 attempts to inject malware into Indian networks."
"Indian officials understood these efforts as a stern warning from Xi regime's: if India did not stand down in the border confrontation, China would turn off the lights across vast expanses of the country. India surged troops to the border in the following months, and in October, Mumbai went dark."
The October blackout in Mumbai, which China was reportedly behind, lasted several hours and shut down hospitals and halted trains.
"China is capable of launching cyber-attacks on us that can disrupt a large amount of our systems," General Bipin Rawat, India's highest ranking armed forces official, told reporters on April 7. "While we're trying to create firewalls against cyber attacks, we're quite sure that they [Chinese hackers] will break through these firewalls." China has also conducted cyber-attacks on India's pharmaceutical industry, particularly its vaccine facilities.

India has additional reason for concern due to China's close alliance with Pakistan. It has been a long-time hostile neighbor, despite the 2021 India-Pakistan cease-fire declaration, which suspended hostilities along the disputed India-Pakistan border in Kashmir. Pakistan is an ally of China from way back; in December, the two countries signed a military memorandum of understanding to boost their already close military relations. According to China's Minister of Defense, General Wei Fenghe:
"We should push the mil-to-mil relationship to a higher level, so as to jointly cope with various risks and challenges, firmly safeguard the sovereignty and security interests of the two countries, and safeguard the regional peace and stability."
China is Pakistan's primary supplier of military equipment -- 73% of Pakistan's arms purchases in the years 2015-19 reportedly came from China. According to a recent analysis by the Council on Foreign Relations:
"Any future India-Pakistan conflict is more likely to implicate China because Beijing's strategic embrace of Islamabad has tightened in recent years. The China-Pakistan Economic Corridor is delivering tens of billions of dollars in Chinese infrastructure investments to Pakistan, including in territories claimed by India. Rather than urging restraint from both India and Pakistan in their 2019 crisis, Beijing accepted Islamabad's position that it needed to escalate the conflict to deter future Indian aggression."
China's Belt and Road Initiative (BRI) -- a way for China to expand its global influence by making countries economically dependent on it, often through "debt trap diplomacy" (loans countries find themselves unable to repay other than through giving up national assets, such as land or ports) -- also serves as a way to "encircle" India, bringing more countries of the region into China's orbit.
Almost all of India's neighboring countries are part of China's Belt and Road Initiative - some more, some less: Sri Lanka, Pakistan, Bangladesh, Afghanistan, Nepal and Myanmar. India, on the other hand, has refused to endorse the Belt and Road Initiative. According to Hindustan Times:
"India has repeatedly said it will not join BRI because it does not offer a level playing ground to the country's businesses. It has also opposed BRI because a key component - the China-Pakistan Economic Corridor (CPEC) - passes through PoK [the disputed region of Kashmir]".

Finally, for the past two decades, China has been making inroads into the Indian Ocean Region (IOR). Approximately 80% of China's imported oil and 95% of China's trade with the Middle East, Africa, and Europe passes through the Indian Ocean. "More importantly from Beijing's perspective, this region is controlled by Chinese rivals: the United States and India", wrote Christopher Colley of Washington's Wilson Center.
"Overall, China's increasing ties to the Indian Ocean and beyond have expanded enormously over the past two decades... Chinese analysts and government entities are increasingly calling for some form of Indian Ocean fleet/force that can protect and project China's interests. Crucially, based on the available evidence consisting of port infrastructure projects, various statements from the government and China-based scholars/analysts, as well as new naval hardware, it appears that China does intend to develop some sort of Indian Ocean force.
While China will never establish full sea control in the Indian Ocean, it will likely possess the ability to provide a credible deterrent to other states that may threaten Chinese sea lines of communication or entities. However, while China increasingly has the surface combatants to conduct meaningful power projection in the Indian Ocean and has even carried out live-fire exercises in the northern Indian Ocean, critically the PLAN lacks the requisite protection of air power."
"From a security perspective," wrote Dr. Rajeswari Pillai Rajagopalan Director of the Centre for Security, Strategy and Technology (CSST) in New Delhi in January, "since independence, India has not faced any significant maritime threat."
"Much of the Indian maritime security focus was in terms of the relatively minor naval threat from Pakistan and non-traditional threats including piracy and terrorism. While these concerns remain, they have been overtaken by worries about China as an emerging IOR power, with a growing footprint in the region...
"India has multiple concerns about China in the Indian Ocean. One, already alive, is Chinese activities in India's Exclusive Economic Zone (EEZ). Speaking earlier this year, Indian Navy Chief Admiral Karambir Singh said that both Chinese research vessels and fishing boats have been seen in Indian Ocean, including in the Indian EEZ."
The persistence of military tension between China and India is, further, problematic, for the United States. According to Daniel S. Markey of the Council on Foreign Relations:
"Aside from potentially drawing the United States into such a confrontation, conflict between China and India would threaten to disrupt the global economy, undermine regional development, and have considerable humanitarian consequences depending on its eventual scale. If India is weakened militarily and economically in the process, its value as a counterweight to China and the broader U.S. goal of countering China's regional influence would also be undermined."
Originally published at Gatestone Institute - reposted with permission.