Christian Organizations Everywhere Should Brace Themselves For Weaponized IRS 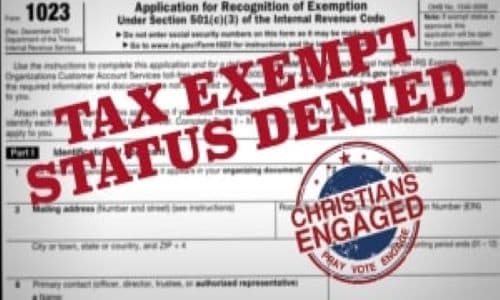 By Tony Perkins/Family Research Council June 21, 2021
Share this article:
Joe Biden keeps saying "America is back." But what he really means is Barack Obama is back. From the military and abortion to transgenderism and education, everything feels like a regurgitation of the 44th president's worst policies.
The shades of Obama run deep, right down to the IRS -- the former president's favorite weapon for crushing the opposition. Under Biden, the tax agency's campaign of intimidation is back, and Christian organizations everywhere should brace themselves.
It was like a recycled headline from Lois Lerner's heyday: "IRS Denies Tax Exempt Status to Christian Group." Lerner, who used to head up the IRS's exemption division, turned conservative targeting into an Olympic sport in 2013. She must have passed along some of those tips to Biden, whose agency decided a Texas group didn't qualify for a charitable status because its members read the Bible.

In a May letter, the exemptions director, Stephen Martin, wrote that Christians Engaged wasn't eligible for a 501(c)(3) classification, because their activities were biblically based. "While you educate voters on what the Bible says about issues, your educational activities are not neutral," he wrote. "The topics typically are affiliated with... the Republican Party and candidates," Martin continued.
Well, it might come as a shock to Martin, but the Bible doesn't belong to the Republican Party. (In fact, we'd welcome more Democrats reading it!) Just because it informs some Americans on core values doesn't make it partisan. And yet the IRS says that even talking about what the Bible says on cultural issues is somehow "engaging in prohibited campaign intervention."
You have to be kidding, Christians Engaged president and founder Bunni Pounds said. "We just want to encourage more people to vote and participate in the political process. How can anyone be against that?"
Good question. It's not the GOP's fault -- or this organization's -- that the Democratic party refuses to support Scripture's teachings on the sanctity of life, marriage, gender, freedom, fiscal responsibility, and so much more. Why is it Christians Engaged's fault that the Democratic Party abandoned those biblical views?

That was the Left's choice. And if the IRS makes this the exemption test, First Liberty Institute warns, religious groups are in big trouble. "That would threaten the tax-exempt status -- not only of Christians Engaged, but of thousands and thousands of religious organizations, churches, and places of worship around the country," attorney Justin Butterfield warns, "because they hold to the Bible or other similar works as being important and taking stands on those positions."
Civic engagement has been a bedrock principle of American society from the beginning. To suggest that religious groups shouldn't participate is the opposite of what the founders intended. It's not only unconstitutional -- it's outright harassment of faith-based groups, something most of us hoped the country was long past.
"They have a weekly Bible study. They send out prayer alerts, they organize prayer meetings for government officials in our nation," Butterfield explained on "Washington Watch," "and they just do things to encourage Christians to get engaged -- things that nobody should have a problem with."
Nobody, ironically, except the president who called faith the "grounding influence in his life." In its letter back to the IRS, First Liberty points out that the idea that biblical values "are exclusively Republican... might be news to President Biden, who is often described as basing his political ideology on his religious beliefs."

"Only a politicized IRS could see Americans who pray for their nation, vote in every election, and work to engage others in the political process as a threat," the group pointed out.
At the end of the day, Butterfield said, what the IRS did was absolutely wrong. "They really violated the First Amendment's Free Exercise Clause, free speech clause, and the Establishment Clause by telling Christians Engaged how they should interpret the Bible -- something no government official has a right to do."
It's cancel culture come to the IRS, he laments. And with their scandalous history of shunning groups they dislike, faith-based groups need to be on guard.
Under Obama, the IRS has engaged in some of the most vicious ideological censorship in American history, systematically silencing dozens (if not hundreds) of conservative groups.
Now, with Joe Biden in charge, it's like nothing at the IRS has changed. The lawlessness that characterized the Obama-Biden administration seems to be back -- and is uglier and more aggressive than ever.
Originally published at Family Research Council - reposted with permission.