Quantum Computing And The Fulfillment of Bible Prophecy 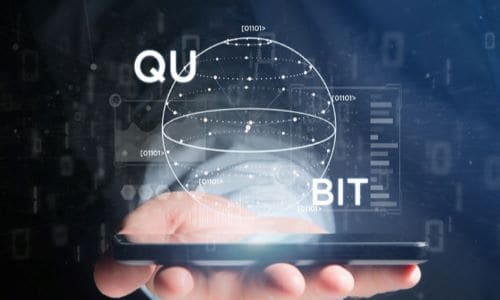 By Britt Gillette/End Times Bible Prophecy June 22, 2021
Share this article:
In a May blog post, Google unveiled its new Quantum AI Campus and announced its intent to build a million qubit, error-corrected quantum computer by 2029. A month later, IBM partnered with the United Kingdom on a $300 million quantum computing research initiative. Corporations all over the globe are investing resources in quantum computing and quantum computing applications.
The reason is simple. Quantum computing promises to advance almost every field of human endeavor - from traditional industries such as banking and energy to new emerging industries such as machine learning and artificial intelligence.
What is a Quantum Computer?
Classical computers encode information in bits, represented as ones and zeroes. Quantum computers encode information in qubits, represented by the directional spin of an electron or the polarization of a photon. Unlike classic computer bits, quantum mechanics allow qubits to exist in both states simultaneously.

So instead of representing either a one or a zero, a qubit can represent both simultaneously. Linking qubits together via quantum entanglement, this means quantum computers have the potential to exponentially exceed the computing power of the world's most powerful classical supercomputers. A few hundred qubits can represent more states than there are atoms in the universe.
Why is This Important?
So why should you care? Such a computer would be so powerful it could instantly break the most sophisticated encryption methods of the classical computer era. Imagine the military advantage a nation state would hold over its competitors if it developed quantum computing ahead of all others. It would have an overwhelming advantage.
If corporations are openly discussing the arrival of quantum computing breakthroughs, what do think governments are doing? The United States, China, the EU, Russia, and others have far more resources than Google or IBM. Think they'll be willing to spend a few hundred billion on a crash program to speed up the development timeline? I think so. And a quantum computing arms race creates uncertainty, distrust, and instability.
Welcome to the Era of Cyber Warfare
Think about the problems and inconveniences created from short-lived disruptions in Internet service or utility operations. How long can you go without Internet, electricity, or water before a minor annoyance turns into a major crisis? Consider the impact of two recent ransomware attacks - one on the Colonial pipeline and the other on meat processor JBS.
The Colonial pipeline attack took place on a Friday. By Tuesday, thousands of gas stations all over the East Coast of the United States were completely out of gasoline. JBS fixed its problems before any widespread meat shortages impacted consumers. But what if it hadn't? JBS accounts for more than 20% of U.S. beef and pork production. A prolonged shutdown of its operations would have resulted in shortages all across America.

In both of events, it's believed criminal hackers were the culprits. No nation states had a role in the attack. Regardless, the Colonial pipeline and JBS ransomware attacks demonstrate just how vulnerable our systems are. Imagine what would happen in a full-blown cyber war. What would happen if your community lost electricity, water, and sewer service all at once? What if grocery stores went bare for weeks on end? The end result of a cyber war between major powers could be absolutely devastating.
A New World Order
When it comes to World War III or a serious military conflict between major world powers, many people live under a false sense of security. Conventional wisdom says World War III is certain to bring global nuclear destruction. And because of this, every leader on the planet is determined to avoid it at any cost. But is this true? Unfortunately, it's not.
The current world order is based on MAD. MAD is the fear of total destruction and the idea no one can win a war between two nuclear powers. For 70 years, it's all that's kept us from World War III. But MAD won't keep the peace forever. It's based on technology. And that technology is on the verge of becoming obsolete. Like all previous military eras, the era of MAD will soon come to an end.
To work, MAD relies on certainty. A nation must be certain it can launch a nuclear attack if threatened. Otherwise, an enemy nation could prevail in a first strike scenario. Likewise, the enemy nation must be certain it faces total annihilation if it launches a first strike. This certainty of "mutual assured destruction" is what's kept the world from destroying itself for over seven decades.
Unfortunately, new technologies will soon eliminate this uncertainty. For example, nuclear armed submarines are the backbone of a nation's nuclear deterrent. A single nuclear armed sub can carry dozens of nuclear warheads several times more powerful than the bombs dropped on Hiroshima and Nagasaki. Such submarines patrol the planet's vast oceans where they're more than able to evade detection from enemy nations. At the very least, they create uncertainty in the eyes of the enemy, who can never be sure about their ability to disarm every such threat.

But quantum computing will change that. It will accelerate the development of new technologies, such as quantum sensors. With powerful quantum sensors, a nation could detect every submarine on the planet. Once detected, those submarines could be disabled using other new technologies. For instance, quantum computing will also enable advanced modeling of chemical reactions.
This will prove critical in the development of molecular manufacturing. With molecular manufacturing, even a small nation could quickly develop legions of tiny swarming drones capable of disarming and destroying any conventional weapon of today. The first nation to develop advanced quantum computers will have the inside edge in the development of these next generation technologies. And if corporations are openly discussing viable roadmaps to these technologies, nation states are even closer to developing them as military applications.
Where We're Headed
The rise of quantum computing, artificial intelligence, drone swarms, and other emerging technologies is a destabilizing event. Together, these new technologies will overturn the post-war stability of MAD. They make World War III inevitable. When the war ends, one nation will control all of humanity. That nation will be the leader in the development of these new military technologies.
Does this surprise you? It shouldn't. The Bible says another world war is certain (Revelation 6:4). It also tells us one nation will control the earth in the aftermath (Revelation 13:7). Is this just a coincidence? No. It's just one of many signs pointing to the soon return of Jesus Christ. Jesus said when you see all the signs converge, His arrival is near (Luke 21:28). Those signs are converging for our generation. So take advantage of what little time we have left. Spread the Good News and tell others about Jesus. The time is short. Jesus is coming soon!
Britt Gillette is author of the free ebook Coming to Jesus as well as the books Signs of the Second Coming & Racing Toward Armageddon.