Iran, Hezbollah And The 'Axis Of Resistance' 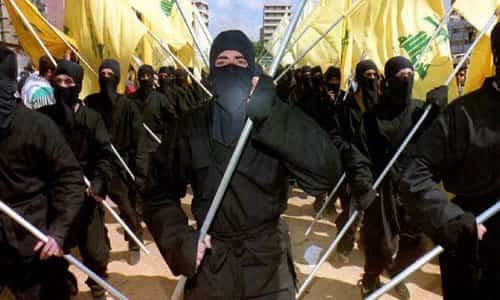 By Shimon Shapira/JNS July 01, 2021
Share this article:
A few hours after the ceasefire between Israel and Gaza on May 21, Iranian Supreme Leader Ayatollah Ali Khamenei issued a "victory message" praising "the cooperation between the West Bank, Gaza, and Israeli Arabs for showing the path for the Palestinians in the future." Israel, he said, "will now be weaker in light of the rising power of the Palestinians and the jihad organizations."
The Iranian leader called for Israel to be indicted for its "shocking crimes," and said its actions had caused a "wave of hatred around the world" which had spilled over to its allies, in particular the United States. He also urged Muslims to pressure their governments to donate money to rebuild Gaza.
During the 11 days of fighting in May between Israel and terror groups in the Gaza Strip, senior Hamas and Palestinian Islamic Jihad leaders maintained telephone contacts with Iran's top brass, including Khamenei and the heads of the Iranian Revolutionary Guard.
Hamas leader Ismail Haniyeh and PIJ leader Ziyad al-Nakhalah spoke with Maj. Gen. Hossein Salami, commander-in-chief of the IRGC, who promised, on behalf of the Islamic Republic, that "Iran would not desert the Palestinians and will stand by their side and support them with all the means at its disposal, up until the final, impending destruction of the enemy [Israel]."

Both Nakhalah and Haniyeh traveled to Iran to attend the Jan. 7, 2020 funeral of IRGC Quds Force commander Qassem Soleimani. Haniyeh delivered a eulogy, and he and Nakhalah were given places of honor right behind Khameini, President Hassan Rouhani, and president-elect Ebrahim Raisi.
Following the May conflict, Brig. Gen. Esmail Ghaani, Soleimani's successor as commander of the Quds Force, sent letters to the "commanders of the Palestinian resistance," including Hamas military commander Muhammad Deif. In one letter to Deif, the "Living Martyr" [because of his many battle wounds], Ghaani praised the resistance organizations' deployment for the campaign and "preparing the tools necessary for the crushing victory," despite the harsh conditions.
Ghaani, in the spirit of the Supreme Leader's remarks, also praised the cohesion of the Palestinian people, "the Muslims in Palestine--in Jerusalem, Gaza, the West Bank and the Palestinian cities occupied since 1948" (referring to the Arab riots in Acre, Lod, Ramla, Haifa and Jaffa). He stated that the Palestinians "demonstrated that they are a dynamic and living nation making its way toward victory."
In his letter to the commander of PIJ's military wing, Ghaani praised the organization's firm stance, that "destroyed the arrogance of the Zionist enemy and demonstrated that Jerusalem is not alone in the campaign." He also wrote that PIJ had weapons "beyond the imagination of the Zionist enemy." He blessed Soleimani's memory and his contribution to the "resistance" struggle, and vowed to continue in his path.
During the rocket barrages on Israel, PIJ revealed an improved Kassam rocket, each of which had been "signed" in memory of Soleimani. After the round of fighting, Iran unveiled an unmanned aerial craft called "Gaza" and a radar system called "Quds" to demonstrate their solidarity with the Palestinians.
PIJ's spokesman in the Gaza Strip, Abu Hamza, issued a statement at the end of the campaign in which he praised Iran and the rest of the "Axis of Resistance" for helping to fight in Gaza. Their weapons, as well as their provided expertise, he said, brought strength and abilities to the resistance brigades (Muqawama), both materially and technically. "You share our victory, and together we will victoriously enter al-Aqsa [mosque]," he said. PIJ leader Al-Nakhalah sent a congratulatory letter to the Iranian Supreme Leader noting Iran's support of the organization and its role "in the victory achieved."
Hezbollah's response
In a May 25 speech marking "Resistance and Liberation Day," commemorating Israel's withdrawal from southern Lebanon in 2000, Hezbollah Secretary-General Hassan Nasrallah praised "leaders of the Palestinian resistance movements and their military wings" for their "brilliant moves" during the Gaza war.
"The final goal is Palestine. The resistance victory in May 2000 was dedicated to Palestine and was a strategic turning point in the struggle with Israel. From now on, we will celebrate two great victories in May--the 25th of the year 2000, and the 21st in 2021-- marking Gaza's victory," said Nasrallah.
The Hezbollah leader said Israel's "dangerous activity in Jerusalem" had pushed the leaders of the Palestinian organizations to take a "historic, decisive and new stance." The war, he said, had erupted as a response to "the foolishness of Israel's leadership, its arrogance, underestimating the resistance, and miscalculations." Gaza, he added, had surprised both its friends and its enemies with its decision to "fulfill its threat in response to Israel's Judaizing of al-Quds [Jerusalem]."

He warned that in future, "activity in al-Quds against Islamic holy sites" by Israel would spark a regional war.
Echoing Khamenei's statement about Palestinian unity, Nasrallah said that one of the Gaza terror groups' most important achievements during the conflict "was the mobilization of Palestinians inside 1948 lands, which terrified Israel." Israel, he said, had failed to predict the response of the "1948 Arabs."
The conflict had also impacted the normalization trend between Israel and Arab states, the Hezbollah leader said.
Nasrallah said that the "Sword of Jerusalem," as Hamas called the conflict, had severely damaged the normalization process between Israel and the Arab states. The Trump administration's peace plan had "collapsed and disappeared" since "Israel's real face and its apartheid regime were exposed," he said.
Nasrallah also stressed the steadfast stance of the "Axis of Resistance" in the various countries that constituted the "backbone that supported the victory in Palestine," and particularly emphasized the support of Iraqi Shi'ite leader Grand Ayatollah Ali Sistani and the Houthis of Yemen.
A joint command center in Beirut
Meanwhile, sources close to Hezbollah revealed that the IRGC, Hamas and Hezbollah had established a joint military operations center in Beirut during the Gaza war. Ibrahim al-Amin, editor-in-chief of the Lebanese daily Al-Akhbar, said during an interview with Al-Manar TV on June 2 that officers from all three groups coordinated the military confrontation in Gaza, adding that the commander of the IRGC's Quds Force, Esmail Ghaani, had visited Lebanon twice to attend the command center meetings.
Hezbollah transmitted weaponry and ammunition to Gaza, and also moved Hamas and PIJ officers out of the Strip during the fighting, according to Al-Amin. The "Islamic Resistance" also provided the Palestinian factions with the needed data about the movements of the Israeli "occupation" military, he said.
During the war, Hezbollah did not respond militarily, satisfying itself with organizing demonstrations near the border fence with Israel and in several areas of Lebanon. Hezbollah also allowed limited and symbolic rocket fire into Israel to show support and solidarity with the Palestinians during the war.
Hezbollah's response reflects its sensitive and complicated situation in Lebanon following the massive explosion at the port of Beirut on Aug. 4, 2020, and the country's dire economic situation. Furthermore, Hezbollah continues to be involved militarily in Syria and is subject to domestic criticism on this issue as well. An all-out confrontation with Israel is also impossible, of course, without a green light from Tehran.